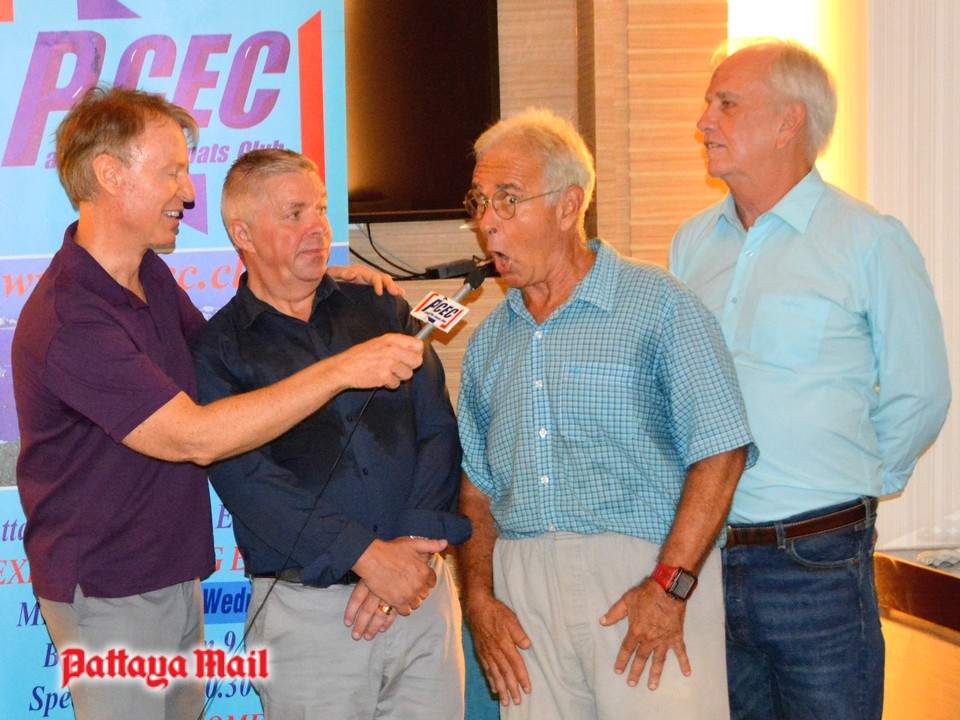 The Pattaya City Expats Club (PCEC) had the privilege of seeing and participating in their “Improv Morning” during the Club meeting on April 27th. The five-member group consisted of Doug Campbell, Sheldon Penner, Sherman Richardson, Paul Strachan and Lisa T (from Tennessee).

Most expats in Pattaya are familiar with the phrase “it’s up to you” often used by Thais when answering a question from a farang. This expression also fits well in the realm of improvisational theater, which consists of unscripted performances by a cast often based on a theme suggested by its audience.

Doug Campbell explained that they chose their name because what happens in their performance is up to you. He said they would perform several scenes, the first being one in which the cast members could only ask a question when they were talking. He asked the audience to fold their arms and make a specified derisive sound whenever a cast member broke this rule. The scene started with two members on stage, the scene being a go-go bar in Thailand. Each time they violated the “question” rule, they left the stage to be replaced by another cast member to carry on. Although they did their best, every cast member had ample opportunity to perform.

The second scene was similar, with the scene this time being a bus station and the cast forbidding the use of a word with an “a” in it. Again ample opportunity for every cast member to perform. This was followed by the third scene which was very funny and a bit surprising. The audience was asked to provide a line from a favorite movie that a band member wrote on separate pieces of paper. Doug explained that each paper would be placed on the stage. The scene was a mother and son in Pattaya. As the actors performed, if they ran out of a line, they had to pick up a paper and read the line. The surprising and most enjoyable part was how often the line of film being played matched the preceding dialogue.

This was followed by additional scenes which also included some audience participation and a Romeo and Juliet balcony scene performed multiple times, each to be completed in less time (1 minute, again 30 seconds, 15 seconds, 7 ½ seconds, and finally in 3 seconds).

In conclusion, Doug Campbell said that they hope to continue their improv performances by asking certain restaurants or bars to invite them to a party to entertain their customers. For more information about the group, visit their Facebook page: https://www.facebook.com/Up-to-you-Pattaya-Improv-107782625247780.

MC Ren Lexander updated everyone on the latest happenings. This was followed by George Wilson who ran the open forum where attendees could make comments or ask questions about expats living in Thailand, especially Pattaya. For more information, visit the PCEC website at https://pcec.club.