WATCH the Stellenbosch student march against the war in Ukraine – SAPeople 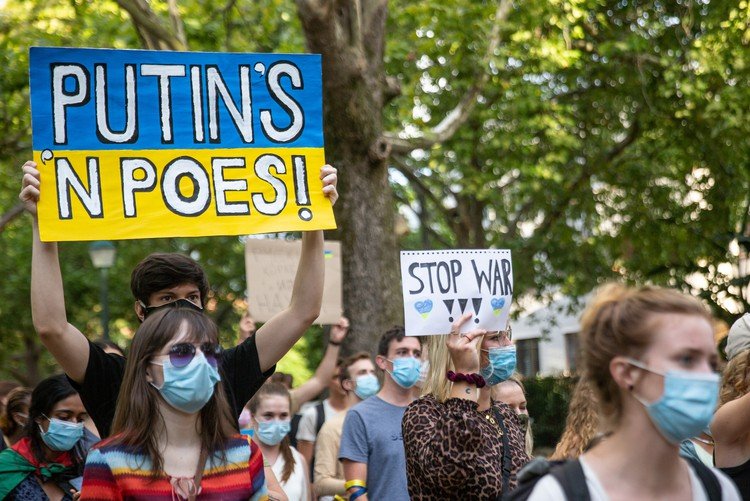 Nadia Pryimak is a Ukrainian citizen who lives in South Africa. She starts every morning reading news and updates on the situation in her home country. Then she asks her sister, cousin or nephew if they are all still alive and well.

Pryimak joined a march of around 300 people in Stellenbosch on Tuesday night to call for an end to the war in Ukraine, which Russia launched on February 24.

A candlelight vigil was held on the university campus and the march was joined by several Ukrainian expats. Ukrainians sang their national anthem to the crowd while holding the national flag.

The demonstrators also carried Ukrainian flags and carried signs that read: “Peace for Ukraine”; “I am on the side of Ukraine” and “Putin is a poet”.

Pryimak has lived in South Africa for ten years. Previously, she was a teacher in Ukraine. Now she lives in a “nightmare”, constantly worrying about her family and friends. She said she was also praying for their president and the military.

She said the walk and vigil were uplifting. “You can’t believe how much this means,” she said. She said Ukrainians should know they have global support. “It’s so far.”

She said the Ukrainian community in South Africa has been following the war closely and keeping people informed through social media. “Now that we’re involved, you don’t think how scary it is, because you’re doing something with your nation,” she told GroundUp.

Similarly, Hannah Zhukovina, who has lived in South Africa for ten years, said that the Ukrainian community in South Africa is currently doing all it can to educate people about the conflict in Ukraine “so that people know what what’s really going on.”

Originally from Kyiv, Zhukovina said she was worried about her family. “Once in a while you have to ask them, ‘Are you okay and alive?'”

The march was also joined by the Palestine Solidarity Forum of Stellenbosch University (SU), Amnesty SU and the United Nations Association of South Africa’s UCT.