Was it Elton John or Tim Hedges at the Pattaya City Expats Club? 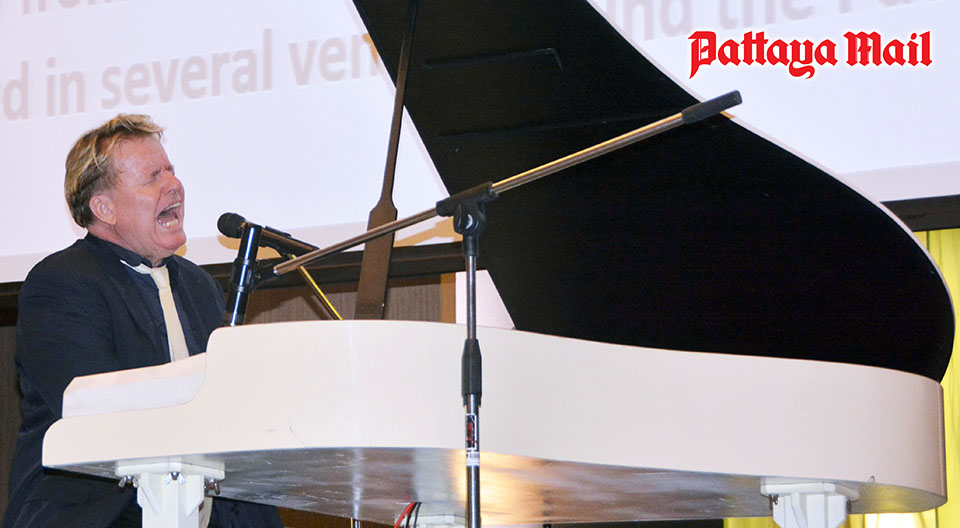 Periodically, the PCEC invites artists to share their story and their music for a Words & Music presentation. The PCEC meeting on Wednesday June 8 was such an event when Tim Hedges appeared to talk a little about himself and to entertain. Tim is well known for his show “Tribute to Elton John” which makes one wonder if they see Tim or is it really Elton John. Tim is also a well known jazz pianist.

Tim said he previously resided for 22 years in Tenerife in Spain’s Canary Islands. He started his career appearing in an ABBA tribute band, but not famous, where he learned to be a showman. It was here that he started his Elton John show, but then lost his voice because he pushed it too hard; playing all of Spain’s holiday islands as well as touring other countries such as the United States.

As a result, he lost his voice and stopped singing for 10 years but continued to be a jazz pianist. He came to Thailand for an engagement at a hotel in Bangkok. He then decided to try his voice again by doing his Elton John Tribute here in Thailand with great success.

To the delight of the audience, he entertained them with the following songs: “Don’t Let the Sun Go Down on Me” by Elton John, his own composition “Bangkok”, “Waltz With Debby” by Bill Evan and ” Rocket Man” by Elton John. ”.

Tim is originally from the UK and now lives in Ban Chang near Rayong with his family. He continues to perform at various venues around Pattaya, his latest being at the Birdland Jazz Room, a recent addition to Pattaya’s music scene. He mentioned that his performances usually have a theme, with his next appearance set to be a tribute to Bill Evans, who was an American jazz pianist and composer. The following week, its theme will be a tribute to Canadian Oscar Peterson, another of history’s great jazz pianists.

At the end of Tim’s presentation, MC Ren Lexander brought everyone up to date with the latest happenings. This was followed by George Wilson who led the open forum where participants can make comments or ask questions about expats living in Thailand, especially Pattaya. For more information on the PCEC, visit their website at https://pcec.club/. To view a video of Tim’s presentation, visit the PCEC YouTube channel at: https://www.youtube.com/watch?v=AyBcfD-hqUo.