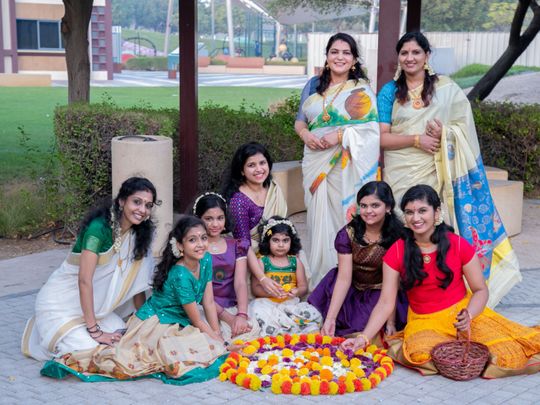 Dubai: Expats in the southern Indian state of Kerala have started what they say is the biggest Onam festival celebration in the UAE after the Covid-19 pandemic.

With mass dinners of ‘Onasadhya’ (vegetarian feast served on a banana leaf) and month-long events, Malayalis (Kerala residents who speak Malayalam) are ready to soak up the true spirit of the harvest festival which symbolizes unity, equality and uniqueness.

Onam is the state holiday of Kerala which is celebrated to mark the return of the mythical King Mahabali or Maveli, whose reign marked the golden age of the state, according to Hindu beliefs.

However, it is celebrated by Malayalis across the world regardless of their religion and beliefs. There are approximately one million Keralites in the United Arab Emirates.

Although it is a 10-day festival with the last day, Thiruvonam (which falls on Thursday this time), assuming the utmost importance, Onam celebrations in the United Arab Emirates usually last for several months while the Keralites organize meetings during the weekends which extend until December.

While Onam festivities have been curtailed for the past two years due to the Covid-19 pandemic, Malayalis are eager to get into full swing with their celebrations this time. Most community groups and associations have reserved large halls for upcoming weekend celebrations. Mega shows featuring popular Malayalam actors and singers are also planned by many.

Some community groups, groups of friends and families kicked off the celebrations last weekend, with many ensuring that all elements of the Onam festivities were cheerfully included.

One such celebration was organized by the alumni of Nirmala Giri College (NGC), Kuthuparamba, one of the alumni groups of the university under the AKCAF Association, an alumni forum in Kerala licensed by Dubai Community Development Authority.

Around 150 former college students and their family members living in the UAE took part in the celebrations held at a restaurant party hall.

“What was special about our Onam celebration was that it was the first time that most of the former members, who knew each other through WhatsApp and Facebook, met in person. But, we made sure to have all the elements of a typical Onam celebration,” Hanson Markose, NGC Alumni Onam Meeting Coordinator, told Gulf News.

A procession accompanied by chendamelam (a performance of cylindrical drums) welcomed an expatriate dressed as a Maveli, a custom followed in most celebrations organized by expatriate community groups.

A pookkalam (floral designs on the floor), an integral part of Onam celebrations, has also been laid out to welcome the mythical king.

The white and gold Kerala sari for women and the mundu (a dhoti-like garment worn around the waist) for men are the ethnic garments worn for Onam celebrations.

There were separate sessions of vadamvali (tug of war), a traditional game played during Onam, for men, women and children.

Pulikkali (tiger and hunter dance) and uriyadi (pot-breaking contest) are also usually performed during Onam celebrations. Over the years, blindfolded games such as sundharikku pottu kuthal (putting the decorative mark on the forehead of a woman’s portrait) and aanakku vaal varakkal (marking the tail on the image of an elephant), are also become popular games associated with Onam.

The Malayali Manka and Purusha Kesari competitions to select the most ethnic Malayali woman and man respectively from the crowd attending the celebrations are also popular.

The highlight of Onam celebrations is the Onasadhya, the sumptuous vegetarian feast that includes up to 30 dishes in some restaurants. Different types of payasam (a dessert similar to wet pudding) are served at Onasadhya.

Malayalis enjoying sadhya in large groups were a regular feature of Onam celebrations in the UAE before the pandemic. This year, Onasadhya mass meals are back with organizations like Indian Association Sharjah and AKCAF organizing sadhyas for thousands of people.

He said the association’s massive Onam celebrations will be held in different venues over two weekends starting September 18.

Apart from the regular Onam festivities, entertainment shows from artists from UAE and Kerala will also be part of the mega event.

AKCAF is organizing a sadhya for about 4,000 people at Zabeel Hall 2 of the Dubai International Convention Center on September 25, said Paul Joseph, president of the AKCAF association.

He said AKCAF was also celebrating “Azadi Ka Amrit Mahotsav”, the celebration of 75 years of India’s independence on this occasion. “Besides pookkala malsaram, payasa malsaram, cinematic dance performances, etc., we will have a grand procession involving people from different states of India. There will also be a public meeting and a concert of popular Malayalam singers” , Joseph added.

While taking pictures with pookkalam and sadhya, wearing traditional clothes is part of the Onam day activities, many families now hold Onam themed photo shoots before the festival. “Posting beautiful pictures of Onam on social media to wish everyone on Onam day is now a trend among us Malayalis. So we started shooting Onam before the festival to post Onam-themed photos on social media. It is also a chance for us to involve our children in these festivities and introduce them to our culture and traditions,” said Vineetha Biju, a resident of Abu Dhabi, who organized a photo session on the theme of Onam with his friends and his children, in one of the parks of the capital.

Onam has his own theme song “Maveli naadu vaanidum kaalam, maanusharellarum onnu pole”, which roughly translates to “all human beings were equal during the reign of Maveli”. It is sung at most Onam events.

This year, UAE-based singers Anoop Menon and Sneha Sajjin released a special Onam music video on You Tube. Titled “Thiruvonasadhya”, its music was composed by Menon himself while Prem Vadakkan Diaries wrote the lyrics.