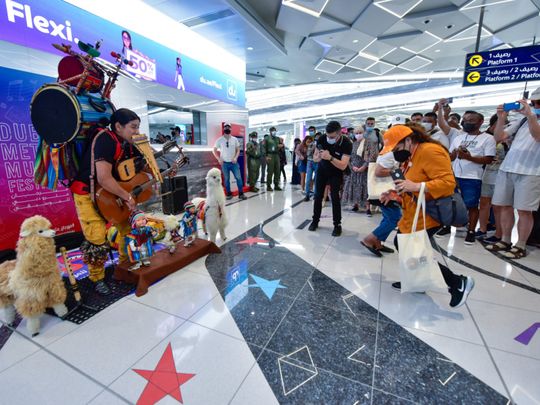 Dubai: As soon as José Luis Torres started performing, crowds of commuters – young and old, expats, tourists and locals – gathered in a semi-circle around him, captivated by his solo band performance.

It was 4 p.m. on Wednesday at the Expo 2020 metro station and the scene was repeated in four other metro stations (Jabal Ali, Mall of the Emirates, Burjuman and Union metro stations). This marked the start of the second week-long edition of the Dubai Metro Music Festival, organized by Brand Dubai, the creative arm of the Government of Dubai Media Office (GDMO), in collaboration with the Roads and Transport Authority (RTA).

An eclectic line-up of 20 musicians from around the world – representing a wide range of musical genres from pop to hip-hop, contemporary to classical, reggae to beatbox, electric to country music; jazz, ska, funk; sounds and beats from Asia, Africa, Latin America and more – are performing until March 22, from 4pm to 10pm, at these five Dubai Metro stations.

Shaima Al Suwaidi, City Branding Manager at Brand Dubai, said: “The music festival is a celebration of the creativity, cosmopolitanism and openness that make Dubai one of the most culturally vibrant metropolises in the world. world.

“It represents the quintessential spirit of cultural diversity and inclusiveness that is at the heart of Dubai’s philosophy, aligned with the vision of His Highness Sheikh Mohammed bin Rashid Al Maktoum, Vice President and Prime Minister of the United Arab Emirates united and sovereign of Dubai, to make Dubai one of the best cities in the world to live and visit.”

First launched in 2019, the event is also part of the ongoing #DubaiDestinations campaign which focuses on showcasing outstanding #DubaiArtSeason experiences, events and activities.

Play in front of the crowd

Torres, who is from Ecuador, captivated the crowd at the Expo 2020 station by wondering how a man can simultaneously play 12 musical instruments strapped to his body from head to toe.

He played ‘Lambada’ and ‘La Cucaracha’ with a double guitar slung over his shoulder, while the panpipes were in front of his mouth and cymbals plus a small drum – decorated with colorful Ecuadorian patterns – were mounted on his head, with bells above. On her legs were traditional instruments made of sheep’s hooves and seeds, while stuffed llamas and colorful dancing dolls strapped to her arms served as her auxiliary dancers.

Torres told Gulf News that he has played in almost every country in Europe and has also traveled to China, but this is his first time playing in Dubai. “In all my performances, I always give 100% because I want people to feel the joyful and vibrant culture of Ecuador too,” he said.

When asked why we chose to become a one man band, he replied, “I love music, which I learned from my parents, and why only play one instrument when you can play at least a dozen at the same time?

Another performer at the Expo 2020 station was Al Taj who played beatbox on flute. The 21-year-old Egyptian national with around 800,000 followers on TikTok, who is also a software engineering student at Al Zaytoona University in Jordan, said it was also his first time playing in Dubai and he was amazed by the cultural mix of the city. .

He played an eclectic mix of American hits, contemporary Arabic music and a fusion of Arab-Western rhythm. He said, “At first I was nervous while performing, but after seeing people smiling and dancing, it was an absolutely wonderful feeling.”

“After a day’s work, it was nice to hear wonderful music on the way down the subway and back home. The musicians were really awesome and beautiful too,” she added.

The music continued at Jabal Ali station and Gulf News caught up with professional panplayer Justin Homer from Trinidad and Tobago, showing off his talent playing a steel pan, a musical instrument native to his homeland. origin.

Homer has performed at various events in Dubai and his vibrant music includes Calypso, Soca, Reggae, Jazz and Pop, to name a few.

The twins were born in Syria but grew up in Dubai where they are now studying in grade 12. They said it was their first time performing “street music” and they loved it. They have previously performed with the National Youth Orchestra at the Dubai Opera.

Gulf News also caught up with Christophe Servas, who prefers to call himself “Fils de Flûte”. He presented his musical instruments made from recycled elements. He said his message was about protecting the environment, delivered with his eclectic music.