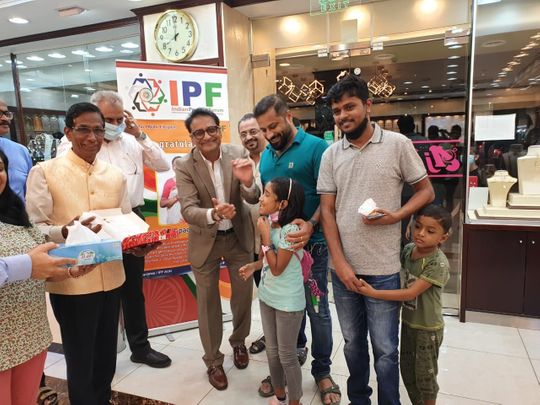 Abu Dhabi: A community organization based in the United Arab Emirates has become a lifeline for many Indian expatriates in distress, even as it brings together the wider community during major socio-cultural events.

These initiatives of the Indian People’s Forum (IPF), which often involve the provision of medical aid and financial assistance, are almost entirely funded by voluntary contributions and donations, reflecting the generous nature of the Indian community, IPF President Jitendra Vaidya told Gulf News.

“Our goal is to foster a peaceful, just and prosperous community. We support social activities for workers, and this is done in all the emirates, mainly through voluntary contributions,” he noted.

The organization, which was launched in 2013-2014, has become more visible for its efforts during the COVID-19 pandemic. Organizing eight repatriation flights for the workers, its volunteers even provided plane tickets if needed and delivered medical kits and oxygen concentrators to India. The IPF has also been instrumental in paying dues for many people who have found themselves out of work during the pandemic.

“The last two years have of course presented some of the most difficult times for some, so we have had to be particularly active. Our volunteers have performed the last rites for expatriates who have died during the pandemic, trained workers on safety measures and health and even arranged hospital beds for their loved ones at home whenever possible,” Vaidya said.

The organization organizes free medical camps in the United Arab Emirates and pays particular attention to the needs of low-income workers. Vaidya said these efforts stem from the “humanitarian orientation of the Indian government” and are also inspired by the UAE’s spirit of tolerance. And in order to realize its objectives, the IPF works closely with the Indian missions in the UAE.

“We are happy to be an organization that anyone can call whenever they need. We have chapters in each emirate, as well as five state councils so workers can communicate their needs in any language,” Vaidya explained.

When Gulf News brought to light the plight of a widow whose late husband had been an organ donor, the IPF stepped in to coordinate with the Indian consulate. The 45-year-old widow was then able to pay all her dues and return home to Gujarat, he added.

Vaidya also highlighted how the IPF is volunteering to help 300 blue collar workers affected by the recent floods in the eastern region of the UAE under the leadership of the Indian Consulate. “The team has put together a generous care kit consisting of essential foods as well as bed linen and clothing,” Vaidya said.

The organization also organizes a number of celebratory events for the Indian community including state celebrations like Independence Day, Diwali and Eid.

More recently, he held a massive yoga practice to commemorate International Yoga Day. Organized in collaboration with the Abu Dhabi Sports Council at the Zayed Cricket Stadium, it brought together nearly 5,000 participants of various nationalities, including Sheikh Nahyan bin Mubarak Al Nahyan, Minister for Tolerance and Coexistence of the United Arab Emirates , Sunjay Sudhir, Ambassador of India to the United Arab Emirates.

“We were thrilled to involve so many people in this event and to share the joy and benefits of yoga with people of so many different nationalities,” Vaidya said.

Asked about total spending on charitable initiatives over the past eight years, Vaidya said the organization does not “believe in counting what is given in support of the needy”.

“Whenever we need it, we just reach out to the community and the funds are generously donated,” he said.

The organization currently has 20 people in its core team, in addition to a Business Council which includes leading Indian businessmen and investors.

“We are proud to be the first point of contact for low-income workers in the UAE and we will continue to do our best to help you. Our 14 verticals, which include a chapter in each emirate and five state-specific councils, are still accessible except for our website which people can use to contact us,” Vaidya stressed.