UAE-based mum: “How I lost 20 pounds and changed my child’s relationship with food” 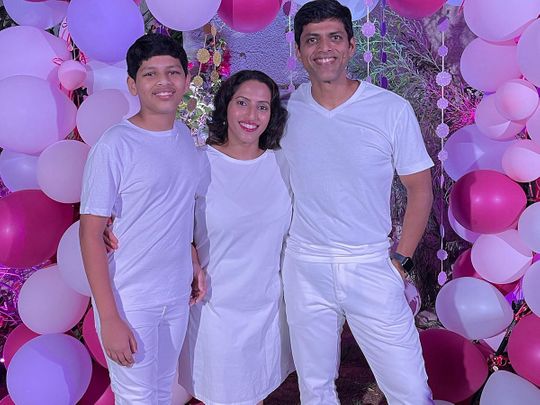 The five-foot, 45-year-old Indian did some things differently. “I knew I wouldn’t be able to eat the non-vegetarian meals that Lijo ate, so I decided to do portion control instead,” she says. “I wanted to make this change as long-lasting as possible.”

Thomas kept idlis (rice cakes), lentils and wheat as part of his program. And she started learning – from Ittoop – easy-to-do strength exercises.

Young, Thomas and Ittoop were active. However, marriage and a move to the countryside made them a bit lethargic. Over the years, they admit, they have put on a lot of weight. They knew they didn’t want to have an unhealthy relationship with food – and they certainly didn’t want to leave that legacy to their son. So the couple started slowly tweaking things around the house in 2017 after a trip to their home country.

Children learn behaviors and acquire habits – including the way they eat – from their parents. “Eating habits are influenced by developmental, family and environmental factors. Currently, on the one hand, obesity is a real problem among young children and adolescents, on the other hand, there is growing concern about the increase in eating disorders. People face the challenge of approaching parenting around nutrition and eating behaviors, in order to strike the right balance by giving their children the right guidance and care. Each child is unique in their physical, behavioral and temperamental make-up. But they are also influenced by the behavior of caregivers. Children will often model their behaviors around the behavior of their mothers and fathers,” says Dr Waleed Ahmed, consultant psychiatrist and eating disorder specialist at the United Arab Emirates-based Priory Group.

Author of a study entitled “The emotional eating of preschoolers partly shaped by the innate food drive”, doctoral student Rebecca Stone explains in a press release: “Our results suggest that children who were more motivated to eating were more predisposed to associate food with emotions. Our research supports the idea that emotional eating is a learned behavior that children often develop in the preschool years, but that some children are more vulnerable than others to developing emotional eating.

A press release from UK-based Aston University states: “Although common among parents, research also highlights that the use of food as a reward or the visible restriction of access to child to certain foods – even in children as young as three years old – can be problematic.”

At the Thomas-Ittoops, junk food was forbidden in the house and each time they went shopping, they read the labels to check the contents – and the calories – of their basket.

Watching his parents get fitter before his eyes seemed to have a big impact on their son. “It follows what we do in terms of fast food and such: sometimes it’s fine, but not as usual,” she explains.

The biggest difference in the family relationship, Thomas says, is how they spend time together. “Because of the energy we both have, we can get out there and be active – together,” she says.