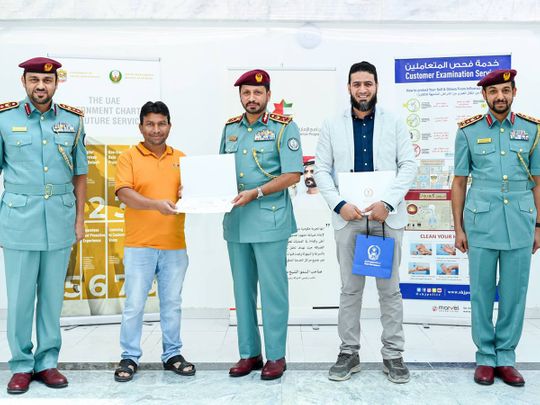 The two men immediately alerted Sharjah police and, thinking on their feet, asked people to spread a blanket on the ground to catch the boy, in case he fell. After identifying the apartment, Rahmatullah and Hafeez broke down the door and ran to grab the boy’s arm and pull him to safety.

“We were just in the right place at the right time,” the duo said, adding, “It was a matter of life and death. Fortunately, we made the right decision and with the help of others, we got through. could save the boy.

Major General Saif Al Shamsi, Commander-in-Chief of Sharjah Police, praised the quick thinking and rapid response of the expats. Rahmatullah and Hafeez received a certificate for their good deed and also each received a new smartphone as a token of appreciation.

The duo appreciated the recognition and said, “It was not about acknowledgment and reward, but about the appreciation of the authorities and ensuring the safety of the boy who will live with us forever.”

In a press release on Thursday, Sharjah Police said: “The honor came in recognition of their magnanimity, their sense of security and their heroic role in successfully handling the prevention of the fall of a child of a building in the emirate.”