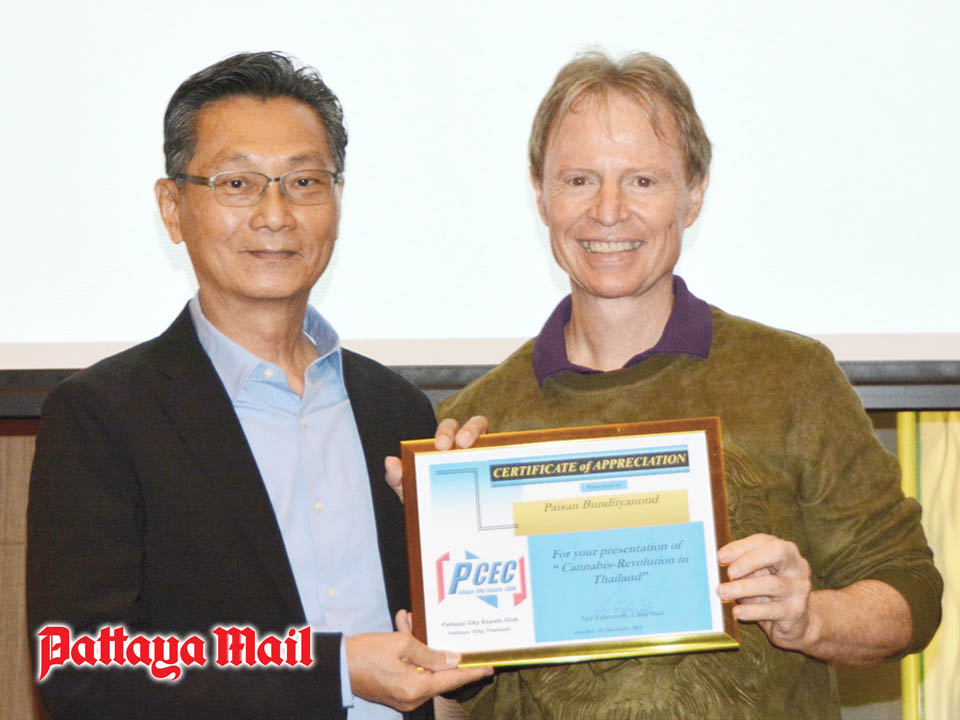 Pattaya City Expats Club welcomed Paisan Bundityanond, owner of Rabbit Resort and Ganj Coffee in Pattaya, to its meeting on Wednesday, December 1. Paisan’s presentation focused on his involvement in legalizing the use of medical marijuana.

He began by specifying that he was neither a doctor nor an expert in cannabis. His interest in studying the medical benefits of cannabis was due to the fact that he suffered from a severe sleep disorder. He noted that cannabis is a Latin word for marijuana (Spanish), Ganja (India) and Gancha (Thailand).

At the end of 2017, he started attending seminars and conventions and taking courses at universities on cannabis. There were many experts from the medical industries, modern medicine doctors, traditional Thai medicine doctors, pharmacists, lawyers, prosecutors, speakers from Drug Enforcement Agency, Food and Drug Administration, etc. In addition, many sick people who have recovered from their illness using Gancha were guest speakers, recounting their own personal experiences.

He then gave a history of his involvement. He described his participation in many activities and meetings. One in particular was in Chaiyapoom province in Isaan, where he met many Gancha activists. These included community leaders, farmers, Thai doctors and more, to discuss how to lobby politicians to legalize cannabis for medical use. Many were patients with cancer, diabetes, chronic pain and Parkinson’s disease. He also attended meetings at three temples, which had given up on modern medicine and where people lined up to be dispensed from cannabis by Thai doctors in the hope of miracles.

Paisan recounted his opportunity to visit Isaan’s largest herb factory, where Suranaree University in Korat had invested a few hundred million baht in herbal production equipment. Additionally, he visited hemp farms where cannabis was cultivated by the Mong, a hill tribe from Chiang Rai. “I was holding a huge Gancha flower similar to the size of a squirrel tail,” he said. Squirrel tail (Haang Grarok) is where he inspected a bag full of cut Gancha plants for use in Thai herbal medicine.

Paisan was among the first group of people who signed a memorandum of understanding with a university, chaired by the assistant minister of health, in the hope of growing cannabis. After the signing ceremony, they visited the university’s first indoor medical grade cannabis farm. Security was very tight due to strict access restrictions.

He was also involved in the study of other ways to grow cannabis, including a tour of Thailand’s largest tissue culture factory, which previously specialized in Thai orchids before switching to cannabis.

Paisan then gave a history of marijuana laws in Thailand, starting with the Narcotics Act, BE 2522 (1979), which was replaced in 2019 to legalize cannabis for medical use. This made Thailand the first country in Southeast Asia to legalize the use of cannabis for medical purposes. Additionally, this is the same year that the World Health Organization changed its classification of cannabis due to evidence that certain cannabis preparations have medical use. He followed that up with a description of how American soldiers during the Vietnam War used Thai cannabis recreationally.

Paisan described the many health benefits of cannabis and the many ways it can be consumed or applied to the skin. Although there can be side effects, they are not serious and can be treated easily. He mentioned how drinking tea from the cannabis leaf has helped him tremendously with his bad sleep disorder.

He concluded his presentation by hosting a ‘raffle’ with several vouchers to use at the Ganj Cafe at the Rabbit Resort, where only legally approved parts of Gancha are available. He noted that these include something quite other than flowers and cannabis seeds. These parts are leaves, stems, and branches that are not psychedelic.

To view the video of the presentation on YouTube, visit https://www.youtube.com/watch?v=ujwRjQxrqrw. MC Les Edmonds took the mike to brief everyone on the latest happenings. This was followed by the Open Forum where attendees can comment or ask questions about expats living in Thailand, specifically Pattaya. For more information, visit the PCEC website at https://pcec.club.