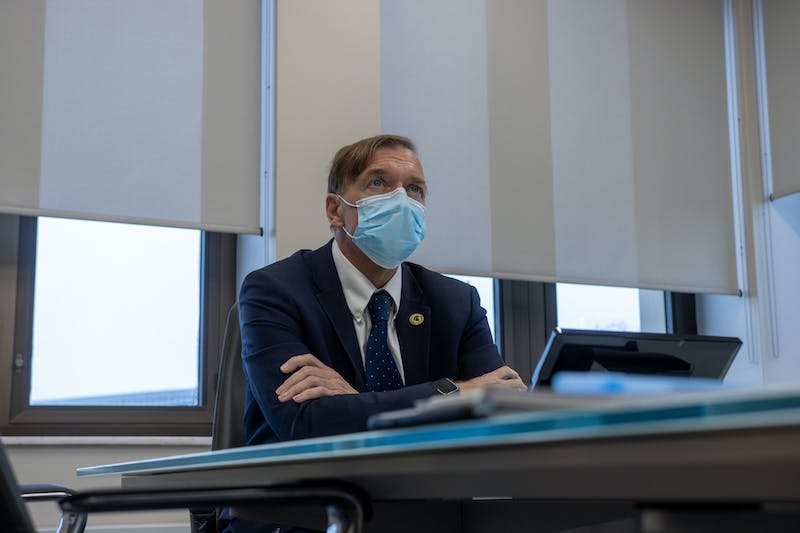 President Samuel L. Stanley Jr.’s contract with Michigan State University is being discussed with the board.

Spokeswoman Emily Gerkin Guerrant confirmed that “the board and the president are evaluating his contract” on Sunday afternoon.

MSU Senate and Faculty Steering Committee Chair Karen Kelly-Blake and Vice Chair Stephanie Anthony said they are “seriously concerned about the trustees’ announced intent to oust President Samuel L .Stanley Jr”. in a press release on Sunday evening. The statement said “that the Board of Trustees communicate with faculty leadership in a deliberative and substantive manner before any decisions are made.”

“Extraordinary actions require extraordinary justifications,” the statement said. “Given our special role in furthering our university’s mission, MSU faculty deserve and demand the transparency the Board of Trustees claims to value.”

In an article published Sunday, the Detroit Free Press said the “tipping point” was the resignation of former Broad College of Business dean Sanjay Gupta. On August 12, the university released a statement saying Gupta had resigned “amid concerns about his leadership of the college and also a failure to report under our mandatory reporting policies.”

Director Dan Kelly released a statement announcing that the board had hired outside legal counsel to investigate the August 30 resignation. The issue was raised at the September 9 board meeting when trustees were asked to vote on appointing professor and acting associate dean Judith Whipple as acting dean of the Broad College of Business.

Whipple was nominated at the meeting by a 5-2 vote and one abstention.

Kelly declared her opposition to the appointment, saying the administration should wait until the investigation is complete. Administrator Pat O’Keefe agreed, saying he thought the board should grant Gupta a “due process hearing.”

Neither director immediately responded to phone calls and emails for comment.

Editor’s note: This article was edited at 7:20 p.m. to add comments from Academic Governance.