Solutions to the currency crisis 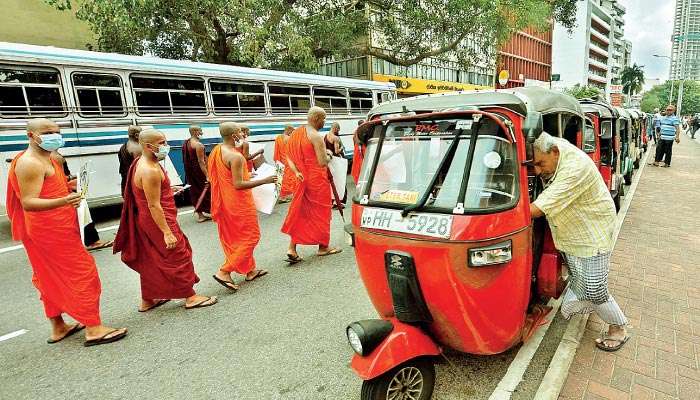 No end yet to the ongoing crisis – Photo by Shehan Gunasekara

As fuel reserves will be depleted, the government has closed schools, extended power cuts and limited fuel problems. Through this, the government is desperately trying to stretch the remaining fuel supplies for a few more days until supplies arrive next week and thus ensure that the country does not shut down completely and industries will operate. .

Export industries have developed a system to maintain their diesel supply by paying in USD. Ironically, people have to queue for over 48 hours to get fuel. This has affected the transport of goods and necessities, people find it almost impossible to go to work. According to sources, the shipment of diesel and oil is scheduled for July 13-14, as the government has acknowledged that Sri Lanka lacks dollars to pay for the shipments. Usable reserves are estimated to have reached approximately $200-300 million. The government needs about $400 million to import oil and gas for a month. The government, according to the prime minister, already has about $750 million in debt to several fuel suppliers. So what can the government do in the short term to improve forex liquidity?

The country, according to the prime minister, is fully focused on getting help from the IMF, World Bank, ADB and friendly foreign governments and on debt restructuring. The Central Bank is also seeking to ensure that exporters bring all revenues back into the country and to impose an appropriate control system to ensure this is done. Analysts say about 20% of foreign currency does not come back into the country to be sold. There is no real data to support this argument until the Central Bank and Treasury up their game. Until this problem is solved, there will never be a solution to the crisis. short-term forex. It has nothing to do with the Havala or Undial system that moves millions of dollars a month.

According to experts, the government has several options in the short and medium term to manage forex liquidity:

2) Exporters are allowed both to return export earnings in whole or in part and to retain USD for export input imports only, including expatriate staff emoluments.

4) Prohibit banks and financial institutions from lending LKR to exporters, even against their USD holdings – residents and non-residents.

5) Prohibit exporters from buying USD against LKR from banks to pay for imports, fees and other outflows in USD, when lower than their USD holdings anywhere in the banking system

1) Allow open account exports for services only or import invoices

2) Service exporters be allowed both to return export proceeds in whole or in part and to retain USD for export input imports only, including expatriate staff emoluments,

3) Give a Certificate of Foreign Currency Earnings (FEEC) in LKR up to (say) 25% of the returned USD and valid for 12 months, which can be used for specific LKR payments through the banking system – Capex machines, software/ computer equipment, LKR debt settlement of the banking system, etc.

4) Export of services for payment in USD shall be subject to full assignment in LKR, subject to retention for specific import content like expatriate emoluments in USD, import of entry goods

5) Prohibit banks and financial institutions from lending LKR to service exporters, even against the collateral of their USD holdings – residents and non-residents.

6) Prohibit service exporters from buying USD for LKR from banks to pay for imports, fees and other USD outflows in USD, when lower than their USD holdings anywhere in the banking system

1) Give a Foreign Exchange Earnings Certificate in LKR up to (say) 35% of the USD surrendered and valid for 12 months, which can be used for specific payments in LKR through the banking system – motor vehicle purchases, software/ hardware, banking system LKR debt settlement, etc.

1) Food imports where local substitutes are not available

2) Obtain data on goods imported from January to May 2022 compared to January to May 2021 to identify access quantities of products imported and held as excess inventory. (These data can be obtained from Sri Lanka Customs). Imposing higher customs duties/tariffs for these items to restrict imports

3) The declaration of unpaid import invoices under the conditions of the DA is sent by the banks to the import controller when the invoices have been unpaid for more than six months. The majority of these payments could still go through Undiyal (Hawala) and six months could be too late to act. Reduce it to two months, so that the import controller can act on unpaid invoices without delay.

4) Prevent smuggling of goods into the country (manual transport of items etc. for commercial purposes) with stricter customs controls.

5) Lift restrictions on outgoing remittances on PFCAs held by residents, to encourage more inflows without fear that funds will be blocked.

6) Allow dual citizenship holders and PR holders to obtain LKR facilities from LCBs for all purposes and with compulsory repayment of such loans through inbound remittances.

H. Negotiate a trade finance agreement with a multilateral partner for the opening and confirmation of CLs.

Prime Minister Wickremesinghe warned citizens that “the next two months will be the most difficult of our lives”. This situation could lead to a significant drop in business revenues and the loss of hundreds and thousands of jobs. Therefore, a PPP crisis management team should be put in place soon to lead the recovery over the next six months with clear objectives. The policy of printing money to pay civil servants’ salaries and pensions and to meet other expenses must be gradually reduced, as this will lead to hyperinflation followed by a massive increase in the price of goods. As difficult as they are, interest rates must come down to support the recovery in activity. Therefore, unless Sri Lanka quickly adjusts its financial parameters and minimizes the political drama, the public will have a high price to pay over the next 12 months for the years of mismanagement by our leaders.

(With contributions from D. Soosaipillai and M. Cooray.)