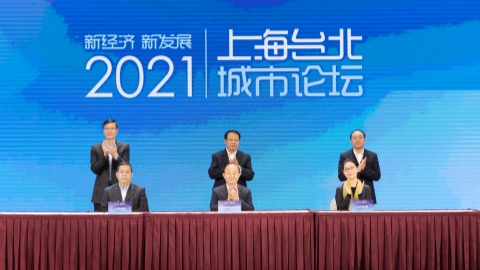 Three MoUs were signed online between Shanghai and Taipei at the Shanghai-Taipei City Forum on Wednesday.

Amid the COVID-19 pandemic, the Shanghai-Taipei City Forum was held on Wednesday via the internet.

Shanghai Mayor Gong Zheng said the forum has become a famous brand for communication across the Taiwan Strait, and this year’s theme “New economy, new development” shows good wishes for future life. people on both sides of the strait.

He said Taipei has many advanced concepts that Shanghai can learn from, and Shanghai is eager to share experiences and strengthen cooperation with Taipei.

“The compatriots on both sides of the strait are Chinese with the same roots, origin and culture. We are a family,” Gong noted.

“We will continue to take care of fellow Taiwanese, providing them with the convenience of studying, working, starting a business and living in Shanghai. We will also support the development of Taiwan-owned enterprises in the city, creating a better business environment for them. We hope we can join hands to create a better life and a better future. “

Taipei Mayor Ko Wen-je said the forum is a platform for exchanges between the larger cities across the Strait and an important channel for maintaining relations between the two shores.

He said the two cities learned from each other through the forum and encouraged mutual trust across the strait.

During the forum, the two cities exchanged experiences in promoting “readable architecture” to make historic buildings more informative for people to learn about their city’s history and enhance urban digital transformation amid the pandemic.

They also signed three MoUs online. The two cities have so far signed 39 memoranda of understanding since the forum was launched in 2010.