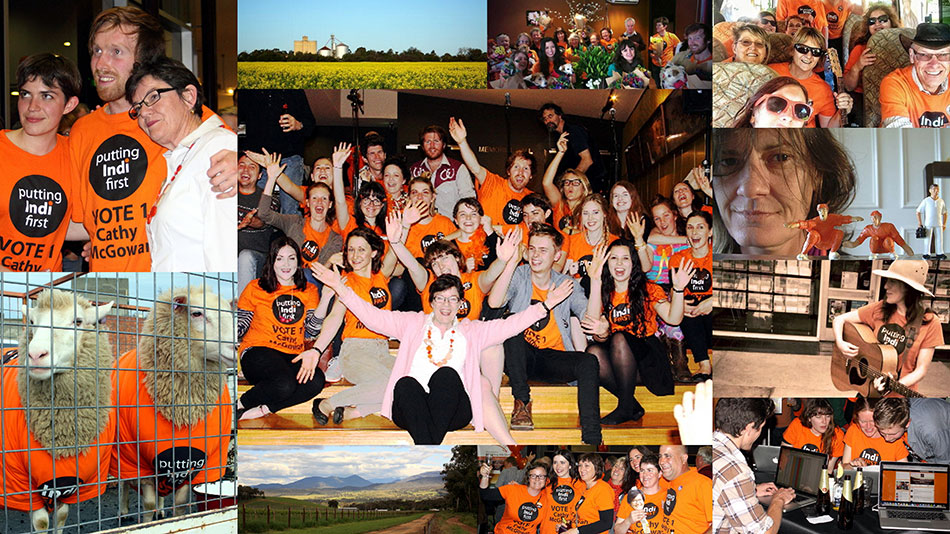 Margo Kingston is a retired Australian journalist and climate change activist. She is best known for her work at the Sydney Morning Herald and her web blog, Webdiary. Since 2012, Kingston has been a citizen journalist, reporting and commenting on Australian politics via Twitter and No Fibs.

“Social media is changing the way news is reported and analyzed and it is a great opportunity to explore its impact on political reporting and democracy.”

I TAKE THE Gold Coast train to Brisbane airport, the plane to Melbourne, the sky bus to Southern Cross station, the train to Seymour and the bus to Wangaratta station . Wayne Jansson drives me in his battered old car and drives me to the hamlet of St James in northeast Victoria. It is November 2013 and the dust from the recent elections has settled. A late frost killed the canola oil crop, and farmers who couldn’t afford to let the crop rot as fertilizer for next year rolled it into hay. Cherry trees look good.

Wayne says his mother Glenys and stepfather Mark will welcome my stay as he lives in a run down rental a few miles from St James. They moved from Goulburn twelve years ago after purchasing the post office. Wayne was a photographer from Sydney and one of the Sydney Opera House stage crew before moving to India ten years ago after an accident at work.

He says he knew from the start of the digital revolution that it would shape the future, so he learned on his own how to build, maintain and administer websites. Wayne has enough clients to get by, just supplemented with professional photography, but he’s shy and doesn’t like to sell himself. Like me. And he is a recluse. Like me.

Wayne joined Twitter early on and went on to become a Twitter warrior, a regular left-wing politics junkie on his hashtag #Auspol. But face to face, he is an observer. He does not impose himself and he takes his time. He ended up reporting for No lies full time after thinking he’d just stick his toe in to see what happened. And he’s struggled to get back to work since the intensity of Indi campaign coverage for No lies finished two months ago. Me too. Journalism as a mask gives confidence.

We sit in the kitchen of an old wooden house that Glenys and Mark renovated from the stump and enlarged with the help of a Croatian builder who never stops drinking and never gets drunk. I tell them Wayne was one of my featured citizen journalists during the election – curious, skeptical, persistent and engaged. Glenys shows me his local newspaper The independent Moira, a 14-page monthly newsletter that she edited and published for many years. It runs in the family.

Had they read his work?

“No, we didn’t need it. We have heard it all as it has happened around this table.

After a good meal and a good conversation, I lie in bed with my computer to find out how I got here.

Yes, there was the May 20 Facebook post from Sarah Capper, an old friend I had met online through Webdiary ten years ago, who now publishes the online magazine. Sheilas for the Victorian Women’s Trust. (I later learn that a founder of Voice for Indi, Alana Johnson, is on the VWT board.)

“Do you see ‘Candidate to lead vision’ in the Border Mail? A new community candidate for Indi takes on Sophie Mirabella. “

I checked out the Voice for Indi website and loved its grassroots engagement and youth involvement. So I followed independent candidate Cathy McGowan and asked her for an article. She said yes, but I hadn’t heard from it again on June 6 when I received an email from a Twitter follower:

“There is a popular political campaign brewing in Victoria that might interest you. Sophie Mirabella is the deputy for Indi… It is not exactly a marginal seat since she won 59.19% of the preferential votes of the two parties in the 2010 elections. However, a movement is preparing to overthrow her, if not during of this election, then the one after, through grassroots action in the community. One of its goals is to become a case study for grassroots community engagement. They want to elect someone in the Tony Windsor mold – from an agricultural background that would appeal to (mostly) Conservative voters in the electorate – and have backed an independent candidate called Cathy McGowan in the upcoming federal election. They aim to get her elected by engaging with the people in the electorate, that is, by actually speaking to them! At local family events, in people’s living rooms, knocking on doors, etc. The reason I know the campaign is because my sister is involved in it.

After a hiatus on Twitter, desperate for a record breaking political report, I posted a column on June 7 titled ‘@NoFibs New Directions’ foreshadowing a project asking citizens to bring the dance of democracy back to the seat where they lived. I tweeted “I am on the lookout for citizens who would like to report regularly on what is happening on the ground in the headquarters where they live. Interested?”

And I chased Cathy, and on June 8th, she sent me a song that didn’t sing:

“I must admit that I am not the author. Although I have a lot of skills, writing about myself is a challenge, so I asked one of the “kids” on my team to help me out. The author is Cam Klose and he is a key member of the “Indi Expats”… a group of Indi youth currently living in Melbourne who manage the campaign’s social media and communications strategies. This is our first “shared” writing post and we’re very interested in your feedback – have we covered the main topics – is there anything else you would like to know? Let us know.”

I was surprised by his frankness and his openness. And trust. I replied to Cathy:

“Well, that’s interesting. The content is fascinating but it reads a bit too much like a press release for maximum impact I think. Idea – the writer, Cam, tells the story from his perspective. How he got involved, the process, interviewing you. I would also like to know more about the expat group. So my comments are that the content is great, it just needs to be based on the voice of the writer. I would also like links to the report, the relevant Twitter handles, your website.
Regards and good luck – what an adventure this will be.

“Great comments, thank you Margo – we’ll get back to it very quickly and get back to you… ‘Interesting’ is a good word for what we’re trying to do. Some mornings I wake up terrified… yet the response from the community has been so strong that we know we are doing the right thing.

June 10 No lies posted his media advisor Cambell Klose in Chasing Involved Democracy in Indi: @indigocathy v @SMirabellaMP, which I now see as the opening of No lies popular coverage of over twenty seats during the election by volunteer realtors, government officials, teachers, musicians, consultants, retirees, students, and current and former journalists. They covered the safe seats and the marginalized, the city and the country, and showed how disengaged most citizens are on the ground. Except for Indi.

Cathy’s Twitter momentum began on June 30, more than a month before the election was called, when Tony Windsor said on Insiders:

“Sophie Mirabella – she wins the nasty prize. I know there’s a great freelance running out there… so Indi folks take a look at your rep and see how much better you could do.

It intensified on August 7 when Crykey reported an email leak from a member of Sophie’s staff warning the Liberals they were underarmed.
Residents of India began to join Twitter to tweet photos of Orange activists on the road through the electorate, and McGowan used Twitter to retweet them and announce events and press conferences. His campaign seemed transparent, spontaneous, very positive and ultra inclusive. I was captivated.

To ensure easy access to Indi’s action so that I can follow and retweet my followers, I tweeted the active Twitter candidates of Indi, Podesta, O’Connor, McGowan and the Labor Party campaign manager. , Zuvele Leschen, to seek consensus on a hashtag. Wayne insisted on #IndiVotes and all agreed, as did Border courier Indian journalist, Natalie Kotsios. the Wangaratta Chronicle and other local media joined in, and I tweeted in the occasional mainstream media story.

#IndiVotes became Twitter’s news and views feed for journalists, locals, Indian expats and interested Tweeps across Australia, and at Wayne’s request No lies Editor Tony Yegles added the #IndiVotes feed to our website so that people who weren’t on Twitter can access it. At Indi’s first major Wodonga Candidates Forum, broadcast live on ABC Radio, the hashtag #Indivotes was displayed on the big screen.

To my surprise and great pleasure, the Border courier and other local media began to retweet No lies.

Powerful. Exciting. And so transparent anything could happen.

In part 2 of #ReportingIndi Margo recounts the momentum that developed around the Indi campaign and how “citizen journalists on the ground were producing Australia’s most comprehensive and innovative national Indi coverage”.