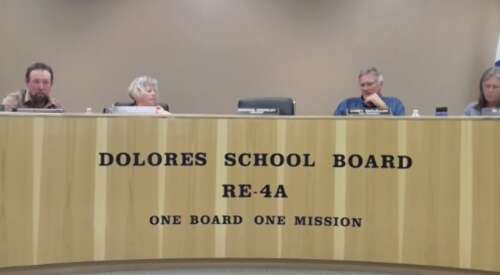 The Dolores School District RE-4A has reignited discussions about building a new school.

The school board originally approved a plan to build a new school in March 2020.

On March 10, the council reignited conversations about the project and voted on Thursday to continue the process, appointing the Master Plan Design Advisory Group to guide the effort. The group proposed a work schedule running from July to June 2023.

The building initiative would require voters to approve a bond measure. The district should also qualify for a Building Excellent Schools Today grant from the state to offset the costs.

Blincoe said The newspaper the district will discuss whether the school would remain at its current location or move to another site.

The school’s move drew a mixed reaction in the community.

In August 2019, the school board approved a master plan for a BEST grant that included a new high school.

But that fall, engineers, architects and government officials cited floodplain issues at the current site and proposed building a campus on a new site.

In March 2020, the school board voted to reconsider its plans in an upcoming cycle of BEST grants.

The original estimate for on-site construction was $45 million, compared to $57 million for a campus on a new site.

Blincoe said new cost estimates will be needed as construction costs have increased since 2020. The project was halted due to the COVID-19 pandemic.

A previous site selection committee found a 121-acre parcel at 29733 Colorado Highway 184 to be the most favorable of three suggested offsite locations.

“We still have a long way to go to talk about it,” Blincoe said.

Several factors play a role in the decision to build a new school. Among them are aging facilities and a lack of space, Blincoe said.

“Our college is packed,” he said.

Meanwhile, the primary school has a temporary portable building.

“I’m glad it’s starting again. Our facilities need to be assessed, we need to do something about it,” council secretary Clay Tallmadge said at Thursday’s meeting. “It’s a shame we took a break, and I’m excited to move on.”