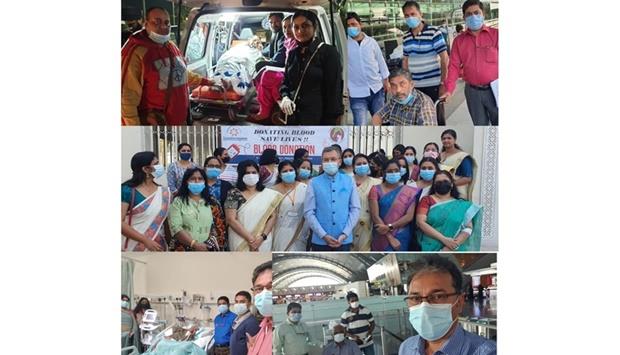 * Punarjani Qatar helps Indians in distress
Punarjani Qatar Indian Expatriate Forum continued to repatriate a number of critically ill patients in 2021 and so far the organization has repatriated around 35 people in need to various states.
Jugiraj Sing Sarwan Singh, originally from Kapurthala, Punjab and working with Karwa was rushed to the emergency room of Hamad Medical Corporation (HMC) due to health concerns. Later, he was transferred to Rumailah Hospital in April, for lengthy therapy and treatment.
Punarjani planned his repatriation after contacting his family in Punjab and obtaining a letter of acceptance from a hospital in Amritsar. After obtaining his compensation and insurance from the authorities, he was recently repatriated to Amritsar where he was received by his family and was admitted to an Amritsar hospital for further medical support.
Ismail Mohamed Rawter, 47, from Alathur, Kerala, was also recently repatriated. He suffered a severe heart attack and was admitted to the emergency room at Wakra Hospital in 2020. He was later transferred to the long-term care unit at Rumailah Hospital.
Punarjani organized his repatriation because the family wanted to provide additional treatment in his place of origin. On December 16, he was repatriated with a doctor and nurse to Kochi International Airport. The forum also arranged an ambulance with a doctor and a nurse in Kochi to take him to the hospital.
In addition, Punarjani assisted in the repatriation of Yunoos Pauvvakkal Nhattuvayal, a 36-year-old man from Kannur. He had been on long-term treatment at the Enaya Specialized Care Center for several months and was in a semi-conscious stage. A doctor and a nurse accompanied him on the flight.
Nhattuvayal, who worked as a driver for a company in Qatar, suffered a cardiac arrest that affected his brain and the development of neurological problems. Punarjani volunteers coordinated with staff at Enaya Hospital, Indian Embassy, ​​Indian Community Charitable Forum (ICBF) and airlines for her trip, and with Pariyaram Medical College in India, to obtain their consent for further processing.
Another successful repatriation this year was that of Thoppayyan Aellappan Periabodi Shetty, 61, from Chennai, Tamil Nadu, who recently joined his family.
Thhoppayyan was undergoing treatment at the Qatar Rehabilitation Center for physical fitness, after being admitted due to severe chest pain and then began to suffer from memory loss. “With the help of several people, we were able to help him return home,” said an official from Punarjani.
Finally, Siraj Ahmed Syed, originally from Hyderabad, was safely handed over to his family members at Hyderabad airport with the help of Punarjani. He worked as a chauffeur in a limousine company in Qatar and was admitted to HMC because he complained of extreme fatigue. He was later transferred to the Qatar Rehabilitation Center for physiotherapy and due to vision problems caused by lifestyle-related illnesses, he was sent for further treatment.
Punarjani Qatar thanked HMC, the Indian Embassy, ​​ICBF and various airlines for their support and assistance in the repatriation efforts. In all cases, the forum contacted the sponsors to obtain financial settlements from their companies. The organization also conducted two blood drives in 2021, with the participation of more than 200 members. He also assists with burial in Qatar as well as consular services and assistance with deportation, among others.

Legal warning: MENAFN provides the information “as is” without warranty of any kind. We accept no responsibility for the accuracy, content, images, videos, licenses, completeness, legality or reliability of the information contained in this article. If you have any complaints or copyright issues related to this item, please contact the supplier above.