Pattaya City Expats Club Presents: What is the Meaning of Life? 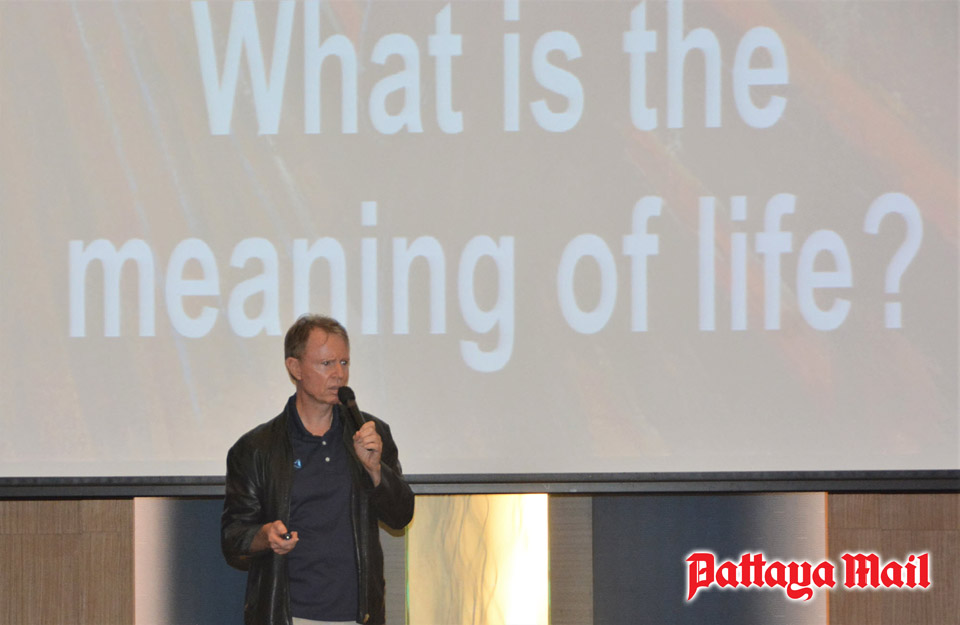 Does life have no meaning?
Does life have a meaning? If yes, what is it?
Is there an inner path of transformation that can give real meaning to life? Was the historical Jesus a “mystic” teaching this inner path?
It was a morning of great questions on Wednesday 29e June at the Pattaya City Expats Club when Dr. Ren Lexander gave a talk marking the release of his new book, The Code of Jesus.

Dr. Lexander had previously been published by major publishers such as Penguin, Bantam, Doubleday, Dell and Harper Collins but it soon became apparent that this was his most radical book. The Code of Jesus argues for an understanding of Jesus that contradicts not only the faith-based view of Jesus, but also the received academic view—that he was a deceived apocalyptic preacher of a coming Apocalypse that never came.

He began his speech by walking through his own life journey which led him to write The Code of Jesus, starting with a depression he went through at the age of 26 after a business failed. This caused him to start asking difficult questions about the meaning of life. Does life have a meaning? Does it matter if I die tomorrow? What is the meaning of life and how to create one that is truly meaningful?

It set him on an inner journey of healing and transformation. In 1991, events occurred along this path that led him to begin reading the works of mystics throughout the ages. And that led him to re-read the gospels and he saw what Jesus was saying consistent with the writings of the mystics.

In 2013, Dr. Lexander set about writing a book claiming that the historical Jesus was a mystic. He found himself quoting some of the Beatitudes (“Happy are the…”) so he thought “Give me another look at the Beatitudes…and I was amazed…because I realized that, in this handful of sentences, the inner path of transformation is spelled out with incredible clarity. Dr. Lexander argued that the first steps of the Beatitudes are the steps that everyone – atheist or not – must take before turning to a path They must:

Mourn (badly because they have no real meaning inside). There must be more to life than that…

Be humbled by this mourning. I don’t have all the answers after all…maybe someone else does…

Hunger and thirst to be inside. The outside world won’t do it for me. Something in me has to change…

He then explained the next four steps on the inner journey that can culminate in what Jesus called “baptism in the Holy Spirit.”

For more than one person, Dr. Lexander’s speech had a very powerful effect. One person said: “I had so much to say this morning to support you and everyone, but I would have been too emotional and would have fought back the tears with the truths you have expressed so well. “

Another comment from a Christian who goes to church was: “I found this entertaining, enlightening and in some way connects religious beliefs and mental health of atheists through Jesus, which I consider as a way to break down barriers and improve the quality of life for all. »

For more information about the PCEC, visit their website at https://pcec.club. The Code of Jesus can currently be downloaded FREE from www.thejesuscode.com. Dr. Lexander’s speech can be viewed on the PCEC YouTube channel here: https://www.youtube.com/watch?v=qkwYk6AB0D8