Pattaya City Expats Club: A Journey Through Thai Cinema and Beyond 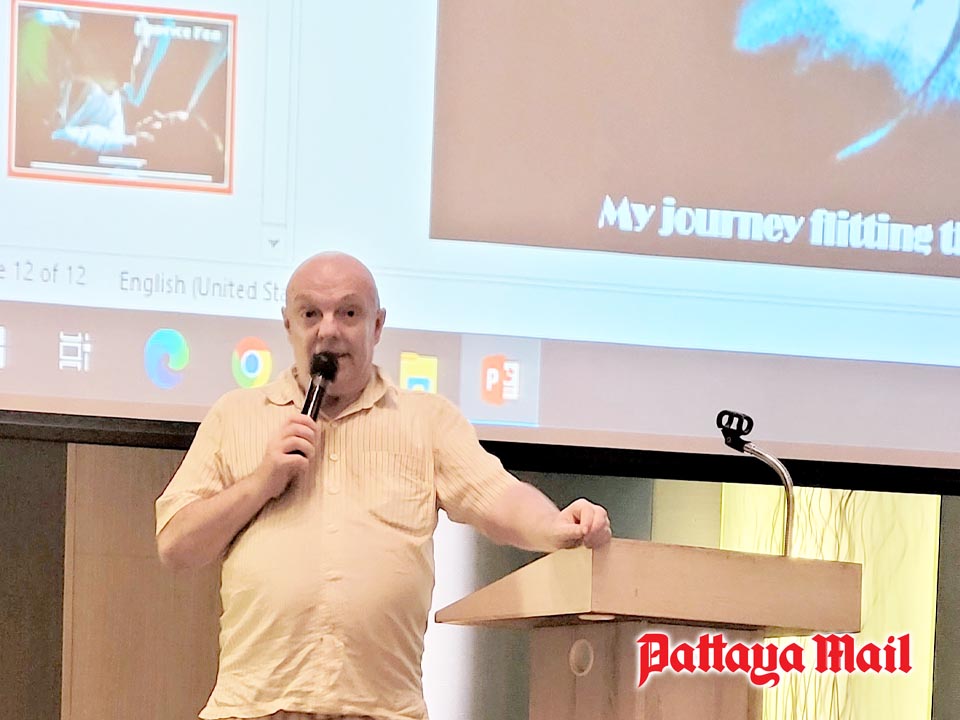 British filmmaker Kaprice Kea landed in Bangkok in January 2000, a few weeks after the skytrain opened. He had arrived with 85 kg of personal effects and his screenplay, Butterfly Man. Knowing that back in London his producing partner Tom Waller had raised enough private funds to finance the filming of the film, Kaprice had not only come to prepare for production but with the intention of starting a new life in Thailand.

On Wednesday, April 20, Kaprice recounted the key steps that led to the realization of the dream at Pattaya City Expats Club (PCEC). Butterfly Man was credited as the first foreign “indie” to be filmed in the kingdom. He also featured clips from his other productions and provided rare insight into his work in the international sector of the local film industry for over two decades.

Proactive among the new wave of British directors of the 90s, a feature film already “under his belt”, and with well-known British director Danny Boyle enthusiastic about Kaprice’s first short, Honeymoon Beyond, praising it as “Excellent… shot with distinction, energy, commitment and vision…a true filmmaker,” why did Kaprice give up his life in England to choose Thailand? The clue may come from his response to an audience member. He described “inspiration” as the essential fuel to sustain a filmmaker on the long, difficult and sometimes dangerous journey to complete a film.

Since writing a first draft in 1998, Kaprice has described how he returns twice a year to tackle the “unknowns” in his story. This included supplying a village in Isaan for the film’s closing sequences. In Koh Phang Ngan, armed with a piece of paper with a scribbled address in Thai, he made the epic journey overland from the South Island via Bangkok and then to the far north of Sakhon province. Nakhon. Despite its remote location, Kaprice found Koh Putsa, befriended the English-speaking monk and was welcomed by the community.

Inspiration can be essential fuel to sustain a filmmaker, but there are times when a blessing would help. This seemed to be the case on the Saturday evening before the team left for Koh Samui on Monday. After searching for two years, a key element of the film was still missing – “The Thai Female Lead”. Since there was no one remotely suitable for the role, Kaprice and producer Tom Waller took a break and headed to Khao San Road for a well-deserved beer. And it was through the legs of tourists and revelers that Kaprice spotted an extraordinary face. He went on to describe what happened next, noting that the face belonged to 19-year-old Napakpapha ‘Mamee’ Nakprasitte and what happened after which Kaprice cast her in the lead role the following day. The following day, the team left Bangkok to begin pre-production on Koh Samui.

After screening the trailer, Kaprice summarized his other film productions and activities. In 2001, he created Fluid Film Co Ltd. (Fluid), giving weekly film workshops (and they continue 20 years later). Its mission to train local actors to a suitable level to work on international films was quickly accomplished. It naturally follows that Fluid defends and represents the interests of local actors.

Kaprice presented the audition tape he shot of Krystal Vee in Bangkok. She was later cast as Princess Silda, the female lead in Scorpion King 3, and now lives and works in Hollywood. Fluid produced music videos, including “I Wanna Be Your Dog”, which launched the electro-clash group, Futon. Kaprice also produced and cast Glory Days, an American film shot in Pattaya in 2009. He has cast 12 international productions and has several credits as an acting coach.

Kaprice returned to directing feature films in 2016 when he came to the rescue of his friend’s film, The Attic. Although he doesn’t believe in ghosts, the inexplicable appearance of a ghostly white hand in Eric Nelson’s photograph prompted Kaprice to make his first documentary, If The Walls Could Scream.

In conclusion, Kaprice mentioned that just last Christmas, only four months ago, the soundtracks of another Bootleg Guru movie that had been missing for 15 years, were discovered by the camera assistant during a an apartment move. Kaprice pledged to cut the film together and finally finish it.

MC Ren Lexander updated everyone on the latest happenings. This was followed by George Wilson who ran the open forum where attendees could make comments or ask questions about expats living in Thailand, especially Pattaya. For more information, visit the PCEC website at https://pcec.club