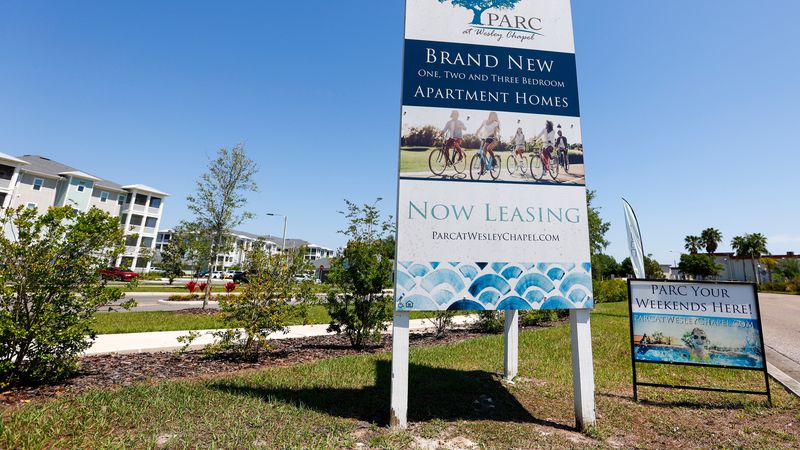 DADE CITY – As Pasco County elected leaders grapple with booming growth in the Wesley Chapel area, individual commissioners paint different, and sometimes conflicting, visions of what they want to see happen there.

These differing views were on full display earlier this month when the commission heard a request to alter what can be built in a small corner of the Seven Oaks community just east of Interstate 75.

In a three-to-two vote, the committee rejected a plan to convert the permitted construction of retail and office apartments and a parking garage to be built on a smaller commercial area. Board members expressed reasons ranging from a desire to see everything that happens there create lasting jobs to a hope to see the area develop into a central business district for Pasco County, even if new houses and apartments fill old farmland.

The vote came as the council is set to extend its moratorium on future flats. This temporary halt to new applications was designed to give county planners a chance to take stock of the number of apartments already approved in this part of the county.

During a lengthy public hearing before the vote, several commissioners outlined their long-term visions for the region.

Commissioner Mike Moore, who initiated the moratorium on apartments in his district, introduced the motion to deny the conversion. He has repeatedly argued that the area doesn’t need more apartments and that turning land meant to create jobs into more rooms for workers from other counties isn’t in Pasco’s best interest. .

Commission President Kathryn Starkey, who voted against this motion, saw the Wesley Chapel area as the future downtown area of ​​Pasco County. There she said she could envision the construction of multi-story buildings clustered in this corridor and a center for living and working with a robust public transit system in the decades to come.

The people of Seven Oaks, however, saw a much different future. for their neighborhood when they bought homes there in recent years.

Community drawings planned by the master showed residential areas surrounded by shops and restaurants. Resident after resident described their home buying decisions based on a concrete plan of what to expect in the future, and a high-rise downtown with luxury apartments clustered together around one of their already busy main thoroughfares was not in this picture.

Seven Oaks’ request was first heard several months ago. In September, county planning staff recommended denying an application to convert the 10-acre parcel east of Ancient Oaks Boulevard and adjacent to Sam’s Club, from 86,000 square feet of retail and office space to 320 apartments.

A procedural problem arose and the plaintiff went back to the drawing board and negotiated with county planners, presenting a new plan to reduce commercial and office space to 20,000 square feet, instead of getting rid of it completely. The project would still have the 320 apartments and a parking garage. After an analysis by county planners that said the new plan was more supportive of county goals, the Planning Commission recommended its approval last month.

You are all registered!

Want more of our free weekly newsletters in your inbox? Let’s start.

Explore all your options

The new plan reached the County Commission on January 11.

Keith Gelder, president of Stock Development, the plaintiff, showed commissioners the plan for four-story apartment buildings with nearby parking and high-end amenities. Joel Tew, representing the company, said that under normal circumstances the county should warmly welcome a project of such quality.

One after another, community leaders and residents urged the commissioners to reject the plan.

“That’s not what we want at the front of our Seven Oaks driveway,” said Jason Canterbury, who expressed concern about congestion in the small, apartment-filled plot and the effect that people would have on local schools.

Jim Kotlyn wanted the county to stick to its plan to have commercial and office space, which he could use for his own security business instead of having to find space in the county of Hillsborough.

“Please don’t eliminate valuable commercial space,” said James Henrich. He was also upset that the proponent wanted a waiver of park requirements for the project. “Do you want your kids to play in the Sam’s Club parking lot,” he asked.

After a public debate, Moore posed a series of strategic questions. For him, the key was that the applicant was proposing changes that result in fewer employment opportunities than if the land use remained as is, which the county desperately needs.

He was joined in his vote against the project by fellow commissioners Jack Mariano and Ron Oakley. Mariano said with half a million residents in Pasco and only 19% working in Pasco, he was comfortable with the original plan for retail and office space. Oakley said it always felt there wasn’t enough ground for the scope of the projects the developers offered.

Starkey and commissioner Christina Fitzpatrick voted against rejecting the application. Starkey said the area actually needed more apartments, the commercial development would bring more traffic, and the plan submitted by the plaintiff did not remove any commercial use from Seven Oaks. It just moved them to different places in the community.

Creating the type of vertical mixed-use building with ground floor retail that the applicant has proposed attracts “really special” types of business options, Starkey said, including “entrepreneurial opportunities for moms and dads”.