Pakistan asks for help as massive floods leave destruction behind 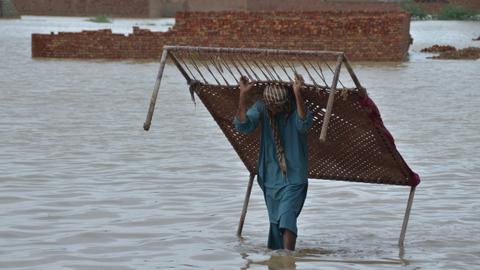 While international aid is slowly arriving, much more needs to be done to protect the country from the ravages of climate change.

As Islamabad declared a national emergency to deal with the deluge triggered by relentless monsoon rains that began in June, the United Nations also reached out for an immediate response.

The crisis has hit the South Asian country at a time when it is in talks with the IMF for a $1.2 billion rescue loan even as it struggles to shore up its dwindling foreign exchange reserves.

The floods have severely affected the agricultural sector, which employs millions of people and accounts for more than 20% of the economy.

Khuram Husain, a Karachi-based business journalist, says 90% of crops in the southern province of Sindh have been devastated.

“These are staggering numbers. The magnitude of the floods is clearly calamitous.

20 million people made homeless by floods. 90% of all crops are destroyed in Sind alone, and then there is Baluchistan and S. Punjab in addition.

These are staggering numbers. The magnitude of the floods is clearly calamitous.

Sindh and Balochistan, the poorest provinces affected by the insurgency, have seen record rains in recent weeks, according to the Pakistan Meteorological Department.

In the northern parts, at the foot of the Karakoram mountain range, heavy downpours caused deadly deluges.

Videos shared on social media show an image of despair as more than 900 people lost their lives in a matter of weeks.

In Khyber Pakhtunkhwa, villagers watched in horror as flash floods washed away five men trapped on a rock.

Politicians from all parties are now appealing for international help as aid agencies worry about the future of millions of homeless people, including children.

The Central Bank of Pakistan has set up a relief fund to collect donations from locals and expatriates.

Prime Minister Shehbaz Sharif formally appealed to the international community to help with relief efforts and met with foreign diplomats in Islamabad on Friday.

“We have contacted donors, friendly countries and international financial institutions for assistance in responding to the scale of the floods. I will meet with Islamabad-based ambassadors and high commissioners tomorrow to brief them on the nature challenge and need help (sic),” he tweeted.

Multilateral agencies, including the World Bank, have pledged $500 million to deal with the emergency immediately, officials said.

The images and videos coming out of the division of Malakand and elsewhere are devastating. Prayers for all the victims and the suffering. [⚠️ The video contains content that shows people washed away by the flood waters] pic.twitter.com/zIKY3PR5iE

Before the monsoon rains, parts of Pakistan and India were sizzling in scorching temperatures, which broke all records for March and April.

Rising temperatures attributed to climate change have caused glaciers to melt in Pakistan and increased the risk of flooding in low-lying areas.

In late May and early June, the temperature in Jacobabad, Dadu, Larkana, Sukkur and other districts in Sindh reached over 45 degrees Celsius.

“It was time for exams and it was so hot that the school children fainted,” said Nasir Ali Panhwar, an environmentalist. World TRT.

“For 4-5 years, the seasonal pattern has really changed. This year there was no spring in Sindh, we just skipped spring and went straight to summer.

Historically, only Jacobabad has seen temperatures reaching 45-50 degrees Celsius, but now the heatwave has spread across Sindh with increasing frequency.

“Among the reasons for the recurring heat wave is the lack of wooded areas. In other countries, the forest area should be around 25 percent. In Pakistan, it is 3 to 4%,” says Panhwar.

With dams and water reservoirs now filled to capacity, just months ago experts were concerned about the lack of water flow in the Indus River, a lifeline for farmers.

“We have forest land but no forests. This is one of the natural factors that we no longer have annual floods from the Indus River,” says Panhwar.

“It is particularly difficult for agricultural production because the weather conditions change.”