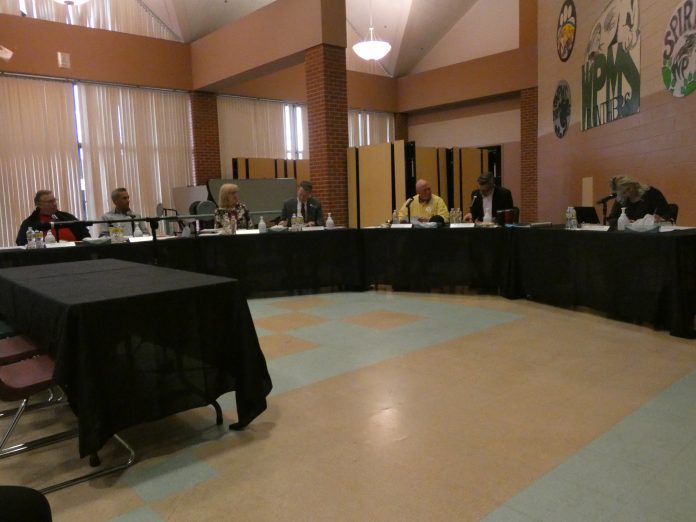 The board’s decision was prompted by concerns about facility closures

During last week’s five-hour Woodland Park School District RE-2 school board meeting, sparks flew again regarding the approval of the new Merit Academy as a designated charter school. in the district.

Approval of a Memorandum of Understanding (MOU) regarding the charter school was on the agenda for the third time.

This time however, the council held a long discussion on the subject towards the end of the meeting. During the discussion, directors David Illingworth II and Chris Austin had a tense verbal exchange.

In the end, board members voted to approve the memorandum of understanding, which would expedite the charter process despite several comments being voiced against the decision from the public. Austin was the only director to vote “no” to approve the MOU after giving several points of reasoning behind his decision.

The purpose of the MOU was to prevent Merit Academy from having to repeat the application process. Now that the MOU has been approved, the contract with Merit Academy was discussed in an executive session following last week’s meeting.

According to board chairman David Rusterholtz, the concerns of former RE-2 executives and why they rejected Merit’s candidacy would still be addressed after the contract ended. Upcoming meetings will focus on changes made to address issues the previous board had with the original application.

The discussion began with Illingworth explaining why he wants to move the charter application process forward quickly. Since they had gone through the process before and had been turned down before, the board sought to make the process smoother this time around. This emerged as a big campaign promise from newly elected school board members.

“I believe school choice is something that people in this community not only want but need,” Illingworth said. “I believe it’s a no-brainer decision. It’s a win-win situation for this district to incorporate Merit Academy as a charter school. Everyone knows our enrollment is plummeting. for several years. Merit Academy, as a contract school, has inadvertently contributed to this. Because children have left our district to go to Merit Academy. Children who leave our district to go to Merit fall off our lists. and they take state funding with them.

The day before the board meeting, a discussion about facilities took place. According to Rusterholtz, it has been determined that the school will eventually have to close one or more schools in the future.

Illingworth went on to say that merit chartering would be a good way to bring students back to the district and potentially prevent them from closing schools. He said he disagreed with the previous board’s decision to decline the Merit Academy application and the process they followed.

“It’s a different decision that we made not because it’s a different board composition,” Illingworth said. “It’s an entirely different situation because the old council had to speculate and guess whether what was on paper was actually going to turn into reality. Luckily, we don’t have to guess whether Merit might be successful in recruiting educators and students. We know that they have succeeded in doing so and that they have prospered. It’s just an entirely different question today than it was a year ago.

All board members except Austin said they agreed with what Illingworth said. After the other board members spoke, Austin raised some concerns he had regarding the approval of the memorandum of understanding.

One of Austin’s main problems was setting a precedent by transferring a contract school to a charter school through a memorandum of understanding and skipping the application process. “When we brought in a consultant, he made it very clear to us that this was unprecedented,” Austin said. “One of the things he wanted to do was make sure that in our process of approaching the transfer from a contract school to a charter school, we were doing things in ‘best practices.’ what we were going to do was basically set a precedent, so for me it has less to do with the viability of Merit as a school.

During the meeting, it was also announced that council attorney Brad Miller would be stepping down from the district during the contract process. Miller said he did not have the capacity to continue working on the Merit Academy contract.