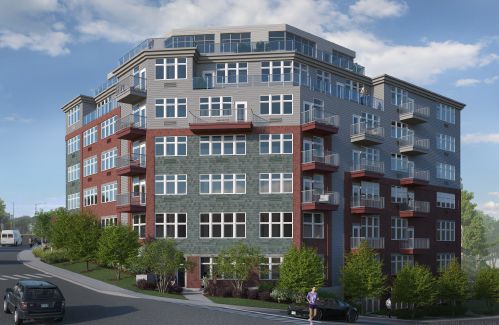 A divided city planning board agreed last week to let the developer of a major downtown apartment proposal exceed the city’s 55-foot height limit for buildings.

Recreo LLC submitted a plan to build 152 apartments in two multi-story buildings at the corner of Mascoma and Water streets.

Proponents of the project – which would include one-bedroom and efficient apartments – say it’s exactly the kind of high-density residential development the city has tried to encourage, while critics have argued the week last that the design was not at the scale of the neighborhood.

“There’s no doubt that this development is significant,” Tim Corwin, the city’s senior planner, said near the end of last Monday’s lengthy discussion of the project. “This is a defining project in a very high profile location.”

The developers are scrambling to get the site plan approved by the board, and last week members clashed over Recreo’s request to have Building No. 2 – which would have six stories and comprise 80 units – exceeds the city’s standard height limit of 55 feet.

According to city zoning rules, developers can apply for a conditional use permit to build up to 65 feet.

At the June 27 meeting, Thomas Jasinski, a member of the Planning Council, argued that it was misleading to say that the maximum building height was only 65 feet. The building would also be tall when measured from the main entrance facing Colburn Park, Jasinski said, but at the back, facing Water Street, the building would be closer to 85 to 90 feet tall. .

“That’s what people are going to see first when they come to Lebanon Green from Mascoma Street,” he said. “I think it’s a bit too big.”

But other council members argued that the scale of the building matched that of other commercial and residential buildings around Colburn Park. Board vice-chairman Matthew Hall said it was a reasonable place to grant the height exemption.

“In my mind, we’re allowed to give up to 65 feet in some cases if we want to,” Hall said. “I don’t know where else would be more appropriate. It’s as downtown as it gets. Given the city’s goals and the location of the project, this makes sense.

Board member Kim Chewning asked the developers what would happen if they didn’t get 65ft cleared.

Recreo’s Tom Sidore said the company’s goals were to achieve the density demanded of the city and improve return on investment.

“You keep cutting and we’re not hitting that target,” Sidore said. “The project may not be tenable.

After a long debate, the council voted 5 to 3 to grant the permit for the 65-foot height. Jasinski, Chewning and Gregorio Amaro were opposed.

Over the past week, the Planning Board has granted eight waivers and four conditional use permits requested by Recreo, most relating to landscaping, buffer zones and setbacks. Developers must be present for the board meeting on July 11 at 6:30 p.m., when members will continue their review of Recreo’s sitemap.

The project provides for a total of 152 apartments. All but four units would be efficiencies in the 400 to 450 square foot range. Building No. 1 would be a five-story structure with 72 apartments and parking for 17 vehicles. The building next to the fire station, occupied by Sunrise Buffet, would be razed to make way for street-level parking. The old supermarket building occupied by a games shop and laundromat would remain.

If the site plan is approved, the project could start later this year, though other variables beyond city approvals could impact that timeline, Corwin said.