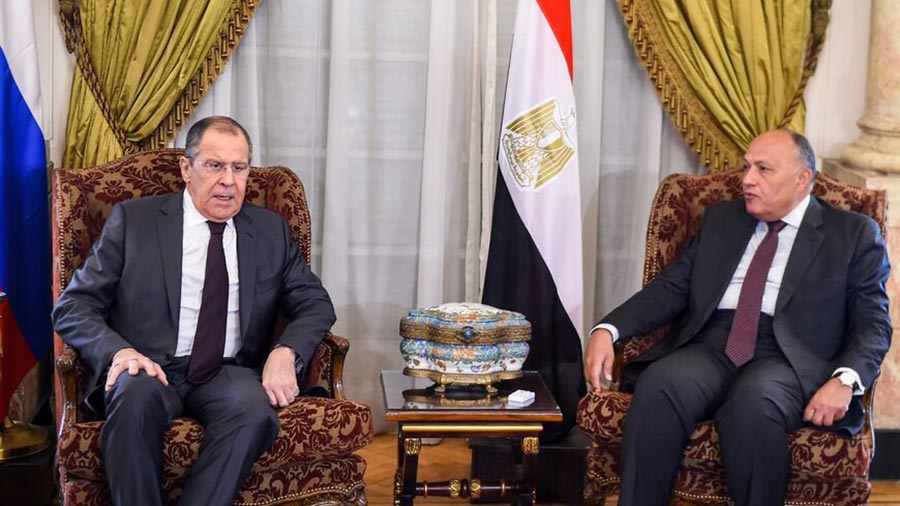 Sergey Lavrov, Russian Foreign Minister, visited Africa to discuss food and fertilizer supply among regional concerns over conflict-affected supply chains in Ukraine. He traveled to Egypt and the Democratic Republic of Congo, then to Ethiopia and Uganda for a remarkable trip because Russia has committed to Africa to discuss these issues while EU countries do not haven’t done it. We discuss the various meetings in Cario as follows:

Lavrov met with Egyptian President Abdel Fattah el-Sisi and Foreign Minister Sameh Shoukry on Sunday, saying Russia is committed to fulfilling its grain export obligations under the recent UN-brokered agreement with Kyiv. last week. This agreement should unblock grain shipments from Ukrainian ports. Egypt is a huge importer of wheat and cereals, with bread a daily staple for its 102 million nationals, but prices have risen dramatically over the past three months as EU countries bought up alternative supplies on world markets and pushed prices to record highs. . The Russian harvest is expected to reach record volumes this year, with Russia also offering grain shipments to Egypt (and Africa) through the INSTC supply chain, from Russian ports in the Caspian Sea to Iranian ports in the Persian Gulf . From there they will access the Suez Canal as an option to the normal Black Sea/Suez routes. Lavrov said: “We discussed the specific parameters of cooperation in this area, agreed on new contacts between the relevant ministries, and we have a common understanding of the causes of the grain crisis.”

Egypt has also had discussions with Russia on a Free trade Agreement with the Eurasian Economic Union, while Russian investors are also developing a Free Trade Zone in Port Said, near the entrance to the Suez Canal. Discussions also focused on the progress of the construction of the Russian nuclear power plant at El-Dabaa northwest of Alexandria and issues concerning the dispute between Egypt and Ethiopia over the Grand Dam of the Ethiopian Renaissance. Lavrov will travel to Ethiopia on Tuesday.

Egypt was the main foreign partner this year St. Petersburg International Economic Forum (SPIEF). Bilateral trade between Russia and Egypt has increased, reaching US$4.7 billion in 2021. An EAEU trade deal would push this much higher and also allow Egypt to trade more easily with others. Islamic nations, Kazakhstan and Kyrgyzstan, about to become much more accessible via INSTC routes. across Iran.

The Russian Foreign Ministry said: “During the meeting, all parties assessed the level of cooperation between Russia and the Arab League in the interest of resolving the crisis situation in the Middle East and Africa. of the North, strengthening security and stability in the region. Particular attention was paid to the prospects for expanding trade and economic cooperation between Russia and Arab countries. The sides reiterated their mutual interest in boosting Russian-Arab trade relations to promote trade, industrial cooperation and implement joint projects in Russia and Arab League member countries.

The parties also exchanged views on current aspects of the regional agenda with emphasis on finding ways to settle the conflicts in Libya, Syria, Yemen and Palestine-Israel. Part of this dialogue will have addressed the opportunities created by the Abraham Accords, an agreement between Israel, the United Arab Emirates, Bahrain, Sudan and Morocco, which Egypt and Saudi Arabia are expected to join. This has already sparked significant trade flows among members, with Dubai (UAE) developing as a regional hub overseeing billion dollar regional investment inflows and outflows. This has attracted Russian businesses with approximately 135,000 Russian expats currently based in the UAE.

Western political response has been predictable with suggestions that Russia lacks diplomatic friends, a somewhat disparaging question towards Egypt and members of the Arab league. Although Lavrov will be looking for political support, much of the meetings in Cairo were about trade and investment, with Russia looking to boost it with Africa after being shut out of EU markets.

In fact, Russia sees Egypt in particular as a “gateway” to Africa, which Moscow has been developing for several years. Trade volume between Russia and Africa reached $16.9 billion in 2021, up 21.6% from 2020.

Russian investment flows to Africa in 2021 reached $97 billion, up 147% from 2020. Egypt, meanwhile, maintained its position as the top receiver of FDI in Africa for the third consecutive year. While Russia has sent its foreign minister to Africa to boost trade and create food and energy supply chains to ease concerns, the West has not – and continues to criticize. Egypt and the Arab league members will no doubt increase their trade with Russia in the near future with a free trade agreement between Egypt and the EEU very much in sight by the beginning of mid- 2023.

Briefing Russia is written by Dezan Shira & Associates. The company has 28 offices across Eurasia, including China, Russia, India and ASEAN countries, assisting foreign investors in the Eurasian region. Please contact us at [email protected] for Russian investment advice or assistance with market intelligence, legal, tax and compliance issues throughout Asia.