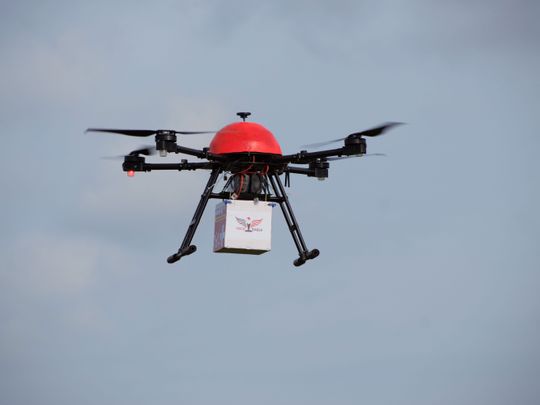 Dubai: A drone delivery startup is probably the last thing you’d expect to step outside of Lucknow, Uttar Pradesh, a city known for its heritage and delicious food. But that’s the story of Tech Eagle, a company pushing the boundaries of drone technology and regulation in India.

“When Tech Eagle was founded in 2015, the goal was to create a unique ‘drone logistics airline’ to serve healthcare, e-commerce as well as defense,” said Vikram Singh Meena, founder and CEO. “During this time, no one even thought of delivering goods by drone.”

Three years later, Tech Eagle became the first company in the world to deliver tea using a drone – and it’s still watching for more possibilities in the skies. “We have worked with DGCA (Civil Aviation Authority), Ministry of Civil Aviation, Ministry of Foreign Affairs, Airports Authority of India and many other agencies to formulate the right kind of policies and allow the delivery of drones in the country. . “

Last year, it became one of the first Indian companies to gain approval for the delivery of “beyond visual line of sight” drones on a trial basis. After the government liberalized drone rules this year, the Lucknow startup became the first in Asia to deliver cold chain vaccines to the Indian state of Telangana.

“This was the first phase of the project, which we have completed and now we are working with Telangana and the World Economic Forum (WEF) for a larger scale deployment,” Meena said.

Collaborations aren’t limited to the public sector – the company has also conducted several trials with food delivery giant Zomato. “From November 2018 to 2020, we worked with them to assess how drone food delivery will work in an urban environment,” Meena said.

The entrepreneur added that for now, the company will focus on healthcare as it has applications in rural and semi-urban areas. “We would like to work with Zomato in the near future when we have better penetration into the urban environment and obtain all regulatory and safety clearances,” Meena said.

E-commerce penetration in rural areas of India – where 60-70% of the population resides – is quite low given the infrastructure and logistics challenges. “It’s because the products take around 6-10 days to get to those areas,” Meena said. “But the internet connectivity is great and if customers get overnight delivery service, they’ll take it.

“When we take out our drones with 100 kilograms of payload, most e-commerce packages will be delivered with our fleet. We are already working with a few e-commerce majors in India and towards the start of next year you might see some of the operations taking place in this segment as well.

Tech Eagle raised $ 500,000 in a seed funding round earlier in June and is looking to raise a larger amount. “We have started the internal process (and) are already seeing good interest from India and outside as well,” Meena said. “We generated a lot of interest during our presentation at the Elevate startup pitch session in Dubai. “

Tech Eagle is not looking for just any investor, the startup wants a long-term shareholder with knowledge of the sector. “We are looking for people who definitely have experience (in the sector) and who can open new doors. They should also bring a lot of expertise and knowledge in the field other than money.