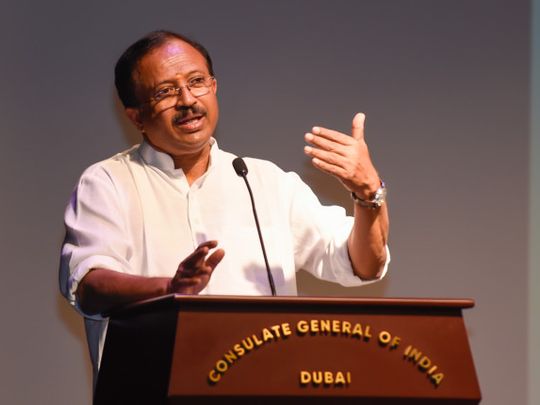 Dubai: A visiting Indian minister on Friday said his government would take steps to increase flight services between India and the United Arab Emirates to reduce the huge spike in airfares in the sector.

India’s Minister of State for External and Parliamentary Affairs, V Muraleedharan, was speaking to the media after attending a community meeting and Onam celebrations organized by the Indian People’s Forum at the Indian Consulate in Dubai. He stopped over in Dubai on his way home from an official visit to Africa.

Responding to a question about exorbitant ticket prices due to which the summer trips of several Indian expatriate families have been affected, the minister said the Indian government “has taken the issue seriously”.

He said he had personally discussed the issue with the former and current Minister of Civil Aviation on several occasions. He said the aviation sector is not regulated by the government and air fares are largely determined by the market.

However, Muraleedharan said that the Indian government took the initiative last year to increase the number of flight services and will continue with the same approach in the coming peak seasons to ease the burden on expatriates traveling during high peaks. seasons. “We will try to increase the number of air services like last year by collaborating with the airlines,” he said.

Asked about the government’s assistance to the families of Indian expatriates who died of COVID-19, the minister said that the government had already announced a detailed COVID assistance package and “if further measures need to be taken, we will certainly consider the optionally. “

Muraleedharan pointed out that India’s bilateral friendship and relations with Gulf countries have witnessed remarkable progress over the years and Indian expatriates have benefited greatly. He added that the Comprehensive Economic Partnership Agreement between the two countries has paved the way for several employment opportunities for Indians in the UAE and at home.

During his speech at the event, the Minister said that there are around 3.6 million Indian expatriates living harmoniously in the UAE. “3.6 million people from another country would not live anywhere else in the world,” he commented, thanking the hospitality of the leaders of the United Arab Emirates. He said the majority of Indian expats come from the southern Indian state of Kerala, his home state, which celebrates Onam as its state festival. Later, the Minister attributed this figure to rough estimates from various sources.

Although there has been a reduction in the number of Indians working here because many of them had to return home during the pandemic, he said “people are coming back since the economy is picking up again.” He also praised the contributions of the Indian expatriate community to support the economy and the volunteer services offered to distressed community members.

Pointing out that Malayalis celebrate Onam until December in the Middle East, he said the festival gives aspiration to the people to have progress for everyone and everyone should live happily and comfortably. “I am happy to note that we will make efforts to create a society where everyone is treated equally and everyone has a just society as the saying ‘live and let live’ is practiced in India.”

The Minister appreciated the Indian Consulate in Dubai for providing its services 365 days a year for two years. He assured Indian expatriates that the Indian government and its missions here are always mindful of ensuring the welfare of expatriate citizens.

Ramkumar Thangaraj, Consul (Education, Passport and Attestation), who is also Acting Consul General of India in Dubai, also thanked Indian associations and social workers for their invaluable service to the community and for helping the missions to render their services.