Independence Day is an American holiday that has meaning for all 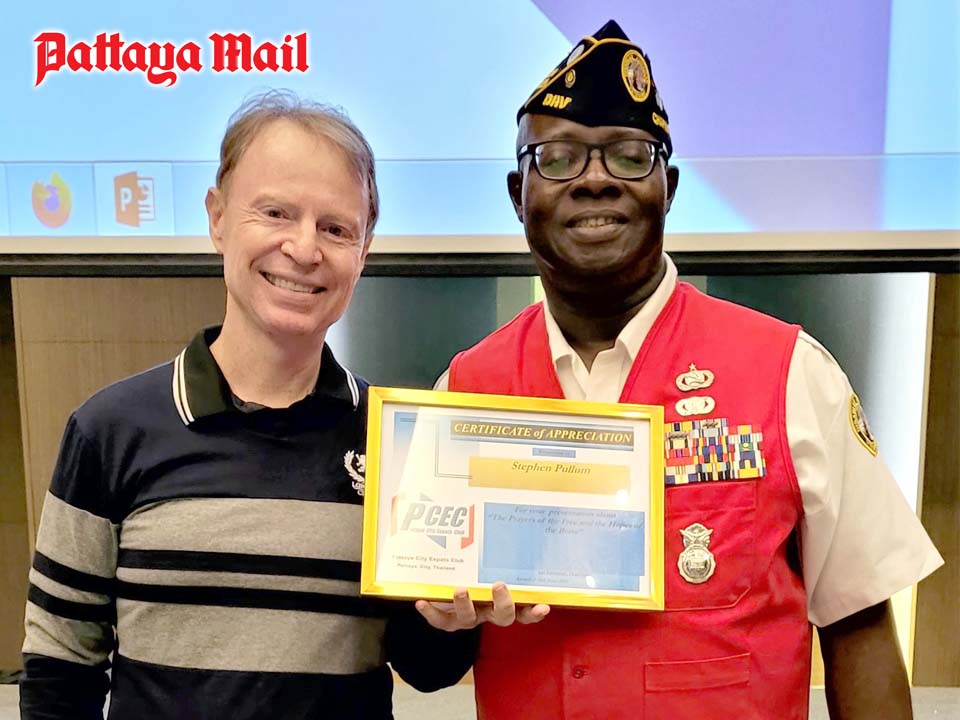 Stephen Pullum gave an emotional presentation at the Pattaya City Expats Club (PCEC) meeting on July 6, 2022. His speech was not only about the celebration of Independence Day by the United States, but also about the how it has meaning for the rest of the world. His subject was entitled “The prayers of the free and the hopes of the brave”.

Stephen retired from the US Air Force after 27 years of service. He is the recipient of numerous awards and decorations from 3 distinct branches of the US military having served from the Cold War to the Global War on Terrorism. After arriving in Pattaya, Stephen became very active in the following Pattaya organizations: Veterans of Foreign Wars (VFW) Post 9876 (Post Officer), American Legion Post TH02 and Lion Toastmasters Club (Distinguished Toastmaster). Stephen also serves in the honor guard for VFW and American Legion Post.

First, he spoke of the events of July 4, 1776, which founded a nation unlike any other in history. It was a birth born out of sacrifice, hopes, prayers, dreams, ideas and faith. He quoted the following from the Declaration of Independence with great evident sentiment: “We hold these truths to be self-evident, that all men are created equal, that they are endowed by their Creator with certain inalienable Rights among which Life , Freedom and the Search for Happiness”.

He then noted that although celebrated in the United States, it should also be celebrated by all free nations on the planet as its meaning applies to all who seek freedom. Moreover, the United States has sent its young men and women to shed blood on foreign soil in the cause of freedom.

He then spoke of those who were ready or made the “ultimate sacrifice” for future generations they would never see. He intercuts various events in American history with photos and videos as a basis for his belief that Independence Day applies to everyone, not just those in the United States.

He also spoke about the consequences of those sacrifices, especially for American veterans who have suffered from post-traumatic stress disorder (PTSD) – a condition he also suffers from. He mentioned that such trauma is not limited to veterans but is experienced by others who have experienced trauma such as abused children. He feels that those with PTSD should be given more attention and effort, which is one of the reasons he has joined many veterans’ organizations to help other vets. Stephen recommended reading the book “The Body Keeps the Score: Brain, Mind and Body in Trauma Healing” to better understand PTSD.

At the end of the introductions, MC Ren Lexander updated everyone on the latest happenings. This was followed by George Wilson who led the open forum where participants can make comments or ask questions about expats living in Thailand, especially Pattaya. For more information about the PCEC, visit their website at https://pcec.club. To view Stephen Pullum’s presentation on the PCEC YouTube channel, visit: https://www.youtube.com/watch?v=0rZSXKj6FEY.