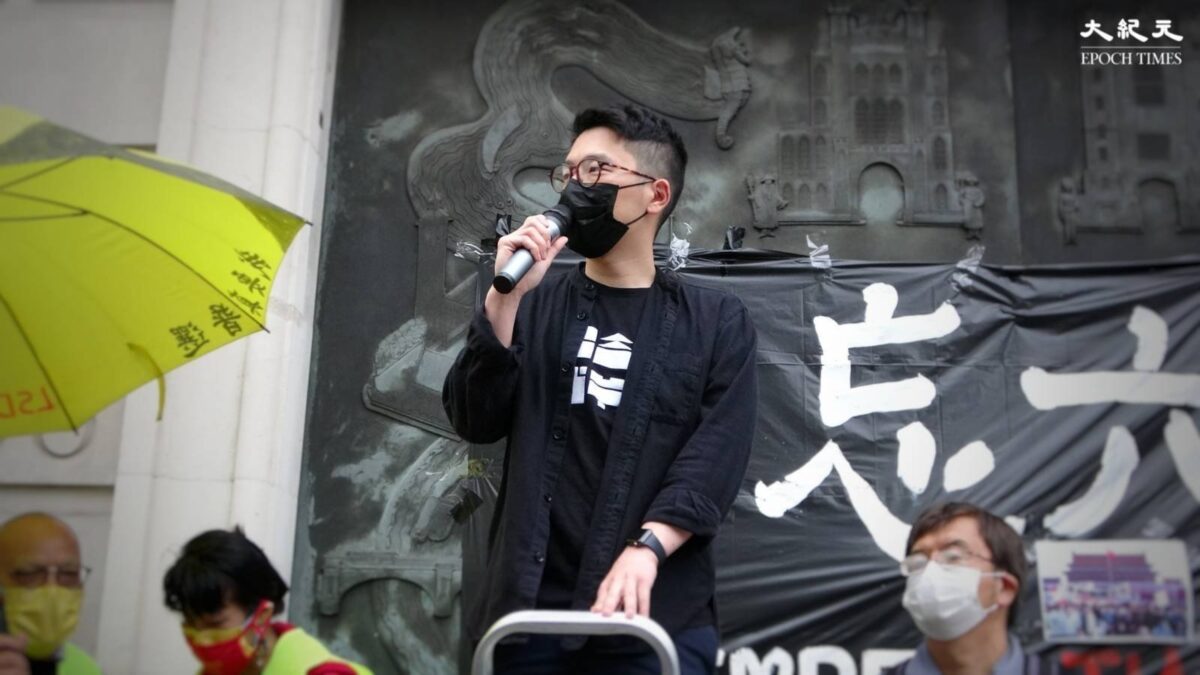 On the 33rd anniversary of June 4, many Hong Kongers who had emigrated overseas gathered in the UK and Australia for a candlelight vigil in memory of pro-democracy activists killed by the Chinese Communist Party (CCP) in Tiananmen Square in 1989.

Hong Kong’s traditional memorial site, Vitoria Park, has been closed by the Hong Kong Authority for various reasons. Although the voices of Hongkongers around the world would not stop, especially in London, Nottingham, Kingston, Birmingham, Edinburgh, Bristol, Manchester City, all popular places for many Hong Kong immigrants.

At 4 p.m. on June 4, 2022, overseas Hong Kongers and locals gathered outside the Prime Minister’s Office in Downing Street, not only to mourn the victims of June 4, but to show support for all oppressed people around the world, including Ukraine, Tibet and Xinjiang Uyghurs, united to resist totalitarianism and protect democracy.

The rally started with the song “State Anthem of Ukraine” in support of the Ukrainian people. The host insisted on stopping the dictatorship and called on people all over the world, from Ukraine or other countries, to unite and fight for democracy and oppose totalitarianism. They shouted “Arrest Putin. Stop the war.”

After the rally, a popular song created for the anti-extradition movement “Glory to Hong Kong”, echoed in the crowd. People shouted, “Fight for freedom, support Hong Kong.”

“We are here today outside the office of the British Prime Minister, calling on all free nations of the world to unite in the fight against Russia and the encroaching democracy of the CCP,” the host said.

Many Hong Kongers in exile or immigrants gave speeches

Law Kwun-chung pointed out that the traditional candlelight vigil in Hong Kong was banned by Hong Kong authorities, freedom of speech and assembly was curtailed, and local Hong Kongers could no longer gather for the memorial.

Law Ka-man said people should not be limited by their identity, but inherit the history that is about to be erased, seek justice for the victims who died under the regime and unite all groups ethnic groups suppressed by the CCP and expose its lies.

Benedict Rogers, CEO of Hong Kong Watch and co-founder of the Conservative Party’s Human Rights Commission, said citizens of Ukraine, Hong Kong, Uyghur Xinjiang and Tibet are standing up against totalitarianism , just like the Tank Man standing in front of the tanks during the June 4 massacre. He also held his yellow umbrella high to show his solidarity with Hong Kong people.

Hongkongers tell the truth of June 4 to the British public

Some Hong Kongers living in Nottingham staged “Nottingham Stands With Hong Kong” in the Old Market Square, with slogans “Stand up and say no to totalitarianism” and “Remember June 4”. They placed exhibition boards to tell local people the true stories of the June 4 massacre, the anti-extradition movement in 2019, and the common aggressive nature of the CCP and Russia.

Nottingham has been a sister city with Ningbo, a city on China’s east coast, since 2005. Organizers of the event said the Russian regime is undermining world peace and the CCP is complicit. They called on the public to sign and ask the municipal government to dissociate from Ningbo.

At King’s Cross station in central London, strangers set up a flash stand, for the impromptu playing of a number of pieces of music that had been frequently played during Hong Kong’s democracy struggles.

The music included: The “Flower of Liberty,” a song for the June 4 democratic movement; “Do You Hear The People Sing” from the musical “Les Miserables” and the most touching song for Hong Kongers “Glory to Hong Kong”.

The music for “Flower of Freedom” was taken from a song “The Sailor” composed by Tai Wan singer Zheng Zhi-hua.

Lyricist Chow Loy-mow was asked by the Hong Kong Alliance in Support of Patriotic Democratic Movements of China to rewrite the lyrics to better illustrate, in a euphemistic way, what happened on June 4.

The song “Do You Hear The People Sing” was taken from the musical of the same name as the novel “Les Miserables”, written by 1980s French writer Victor Hugo, which was considered one of the signature songs of the anti-totalitarian revolution. .

The Cantonese version of “Do You Hear The People Sing” was adapted for “Occupy Central with Love and Peace”.

“Glory to Hong Kong” was composed and written by Thomas DGX and some Hong Kong netizens from the online forum. The lyrics show that the people refused to be silent in the name of justice and rose up to fight against tyranny. The song was popular among Hong Kongers during the anti-extradition movement in 2019.

Memorial to Hong Kongers Living in Sydney and Melbourne

Several groups in Sydney, Australia, jointly organized rallies and marches to mourn the June 4 massacre, to condemn the CCP, and to awaken the Western democratic world to recognize and resist the true nature of the CCP.

About 400 people from Hong Kong, Tai Wan, Tibet, Uyghur Xinjiang and overseas Chinese from all walks of life took part in the rally and parade at Martin Place Sydney Central.

Some people held banners such as “Remember June 4” and “Freedom, democracy, rule of law, human rights” and “Free Hong Kong, revolution of the times.”

Professor Feng Chongyi, the host of the rally, said: “We are here to commemorate the 33rd anniversary of the Tiananmen Square Massacre, to reaffirm our determination to strive for a better future, peace and democracy in China, and show the world that we will support Chinese people who are fighting for freedom.

“The CCP tried to erase people’s memory of the Massacre and thwart any attempt by the younger generation to learn the true story,” said Chen Yonglin, a former CCP diplomat in Sydney, who is also a survivor and a witnessed June 4 massacre of the democratic movement.

In the evening, nearly 200 citizens standing outside the State Library in downtown Melbourne, Australia, held candles or cellphone lights to observe a minute’s silence for the June 4 victims.

“In commemorating the June 4 heroes, we must inherit their spirit to overthrow the CCP and end the CCP,” said Ruan Jie, one of the rally organizers, chairman of the Mainland Affairs Council and chairman of the Tiananmen Times. .

Jane Poon, spokesperson for the Australian-Hong Kong Link and president of the Victoria Hongkongers Association, said that when she lived in Hong Kong, she saw many Hong Kong people marching through the streets in support of the righteousness of Chinese students. .

“Hongkongers have not been able to commemorate the massacre in Hong Kong’s Victoria Park since the CCP’s invasion in 2019. We can enjoy this precious freedom in Australia, so we should be doing more to support democracy and protest harassment. of the CCP.