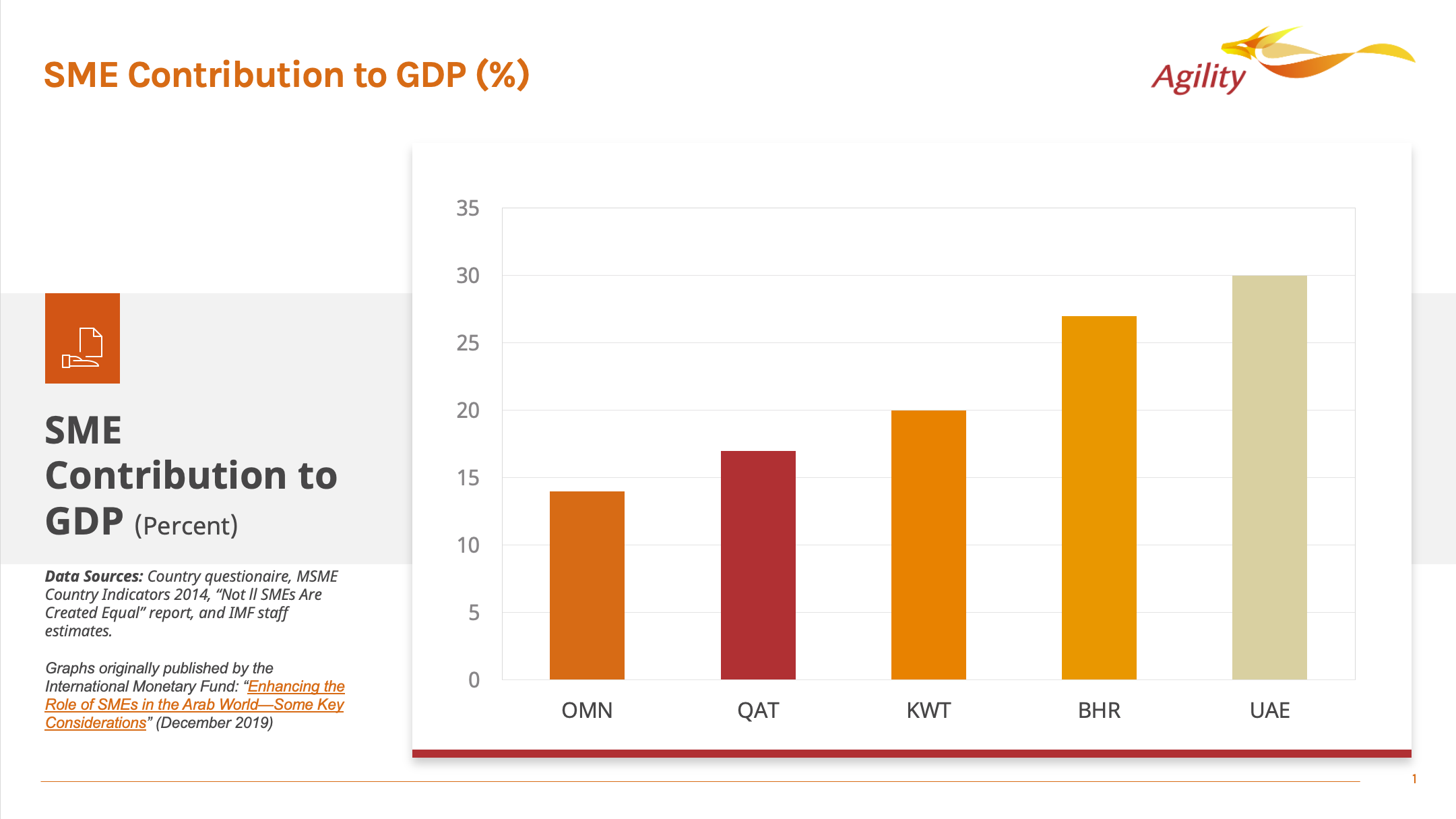 Across the Persian Gulf, countries have made bold plans to diversify and grow the economy. A common thread is the need to support small and medium-sized enterprises (SMEs) as the engine of long-term growth, economic diversity and social stability.

Digitization is key to achieving these goals to stimulate the development of a vibrant SME sector in the region. Small businesses and entrepreneurs cannot do it alone. Governments and businesses in the region will need to work closely together to create an ecosystem and value chains that allow SMEs to thrive.

SMEs in the Gulf Cooperation Council (GCC) have lagged behind their counterparts in terms of share of economic output. Persian Gulf SMEs contribute 15-30% of GDP, with their share at the lower end of this range in most Gulf countries. By contrast, SMEs contribute 40% of national income in emerging markets globally, so the gap is clear.

GCC SMEs also lag behind in women’s participation – a critical weakness because globally the small business sector generally presents fewer barriers to working women and has a greater proportion of female business owners. According to the IMF, only 14% of SMEs in the wider Arab world are led by women, compared to a global average of 34%.

It’s all about jobs

At the heart of the problem is diversification away from the oil sector and job creation.

A thriving SME sector creates new economic opportunities. Around the world, the vast majority of jobs are in the SME sector. In OECD countries, SMEs account for 70% of employment.

The demographics of the Persian Gulf are young, with around half of the local population under the age of 25. Job creation in the private sector has simply not kept pace with the number of entrants to the labor market, leaving young people unemployed, underemployed, or joining the ranks of an already bloated public sector. . It is a costly problem, as shown by the growing public deficits in the region.

Governments are on board

GCC governments are aware of the challenges and have set bold targets to address the problem. For example, Saudi Arabia wants to increase the share of SMEs in GDP from 20% to 35% by 2030, and the United Arab Emirates seeks to increase the contribution of SMEs to non-oil GDP from 52% to 60% .

How can digitalization act as a driver of change?

What will it take to get there? Many reforms are needed, but digitization offers us at least some of the answers, including:

Small businesses struggle to access capital. The financing gap for SMEs is well documented around the world, and the GCC is no exception. The SME Finance Forum estimates that $123 billion is needed for SMEs in the Arab region to realize their full potential, including job creation. Today, Arab SMEs are underfunded by banks and even fintechs. Today, only one in 20 SMEs use commercial banks in Saudi Arabia. In Kuwait, SMEs represent only 3.6% of the country’s total loan portfolio, and in the United Arab Emirates, SME credit represents only 5% of total bank loans – all well below the average for the country. OECD. Only 5% of regional fintechs finance more widely SMEs in the Arab world.

Accelerating digitalization in the banking and financial sector could expand access to capital for small businesses by broadening access to banking services in rural areas, shortening times to access credit and expanding the range financial products offered. Chinese bank MYBank offers a stark example: lending nearly $300 billion to 16 million small businesses with near-instant cash distribution – and a default rate of less than 1% – with just a few clicks on the smartphone.

SMEs in the region also need expanded market access to thrive. Outside of Saudi Arabia, many GCC markets are relatively small in terms of population. Giving small businesses the ability to sell across the GCC instead of only selling locally is an important growth driver. It is important to create a strong ecosystem for cross-border trade.

The good news is that momentum is building in this space. E-commerce in the Middle East has surged during the pandemic and is expected to be a $50 billion market by 2022, growing 20% ​​CAGR through 2022. Local heroes like Mumzworld have seen staggering growth by 800% during the COVID-19 period, according to AT Kearney.

However, to maintain this momentum, it is also important to build the infrastructure and ecosystem for cross-border trade. This includes investing in digital logistics platforms and operations to facilitate e-commerce logistics and last-mile delivery, as well as digitizing customs to further reduce customs clearance times and complexity. Agile research has found that digitalization and customs reforms are particularly beneficial for small businesses, which are disproportionately affected by complex compliance and documentation requirements.

The Fourth Industrial Revolution has presented the Middle East and North Africa with unprecedented challenges that must be solved through community innovation, collaboration and technology.

In collaboration with the Bahrain Economic Development Board (EDB), we have selected the 100 most promising Arab start-ups that will shape the fourth industrial revolution in 2019.

Entrepreneurs and start-ups play a key role in promoting new ideas, strategies and progress in society – and must be given a greater platform to tackle the region’s most pressing challenges.

Our 2019 selection builds on the success of the 100 Arab Startups initiative launched in 2017, aimed at integrating the most promising start-ups in the Arab world into a national and regional dialogue on pressing challenges.

You can help improve the future of the Arab region and solve its unprecedented challenges by partnering with us.

Learn more about the 100 Arab start-ups selected for 2019 in our Impact Story.

Finally, and perhaps most importantly, increasingly digitized economies need digital skills and mindsets to function. This has the potential to become a future area of ​​competitive advantage for the Persian Gulf, where we see one of the highest smartphone penetrations in the world and a predominantly young population of true ‘digital natives’. That said, education systems and on-the-job training must prioritize digital skills with real business applications.

Unfortunately today, things are not going fast enough. According to PwC, digital jobs in the GCC are three times fewer than in advanced economies, and digital professionals in the region simply don’t have the same advanced technical skills as their counterparts elsewhere. Most digital jobs in the region are now filled by expatriates, and 93% of digital professionals are graduates from foreign rather than local universities, according to the same study.

This leads to a dual problem: a digital skills gap, as well as a digital demand problem – as businesses in the region, including SMEs, are not adopting technology as quickly or completely as they should. Think of these issues as two sides of the same coin: companies that don’t have enough digital talent also adopt technology more slowly.

The role of business

Helping to build an ecosystem in which start-ups and SMEs will thrive will require action from governments, but also from leading companies in the region. For example in our own company, Agility works on: digital skills and advocacy; financing and incubation; digital trade; community investments.

We want the region’s biggest companies to join us in creating value chains that enable SMEs to participate and grow – and to see SME empowerment as a core part of the value we bring to the table as successful businesses. This area is one of the most critical levers for future diversification and sustainable economic growth, and we all have a role to play.