Greed, Revenge and Blood: A Glimpse into the World of Gold Smugglers 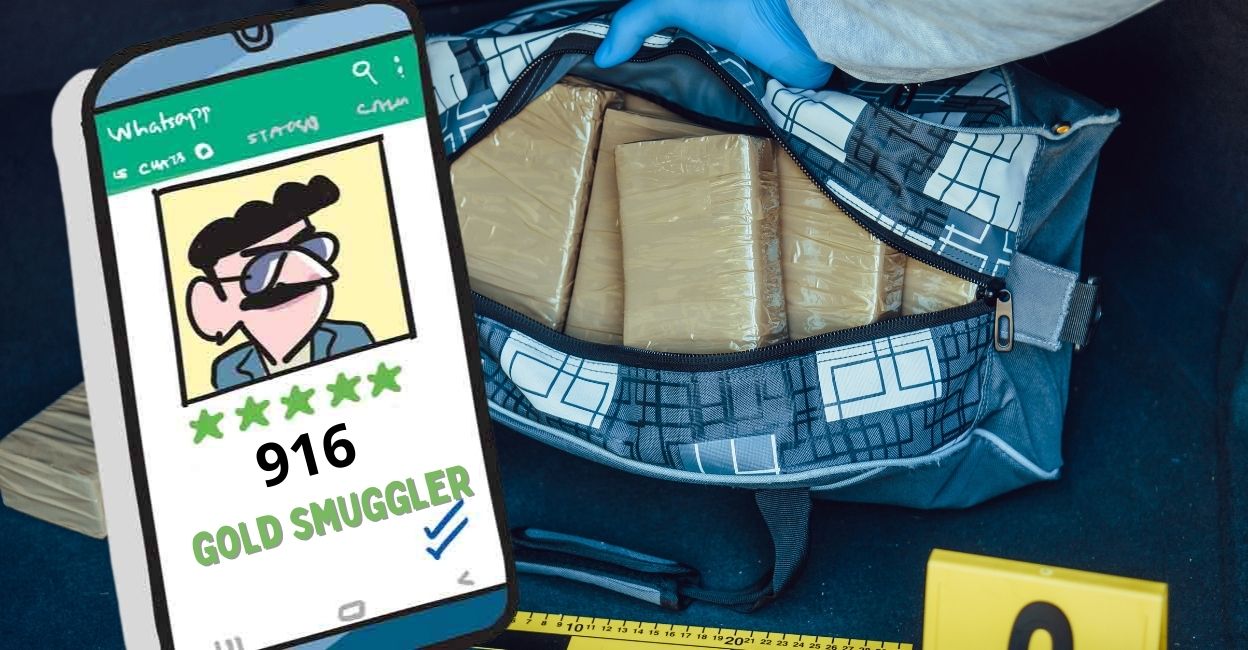 (Manorama correspondents expose the network and modus operandi of gold smugglers in Kerala in a series of investigations. This is the first part.)

Gold smuggling into Kerala through its airports is rampant despite carriers being arrested almost daily. It has now gone from being an economic crime to a public order issue with gangs of smugglers often clashing with each other.

Gold smuggling in the state has undergone a major change. Smugglers stay one step ahead despite authorities frequently nabbing carriers and confiscating contraband. Once dependent on money transferred through hawala (illegal channels), gold smuggling has become a lucrative “industry” for investing black money.

New faces joined the illegal activity as it underwent a change. If carriers were once those who shuttled between countries on visit visas, today families are also part of the network. In short, it has now become a white-collar ‘business’, with the carriers undergoing a complete overhaul.

Still, it’s not without its share of risk. The smugglers themselves are confused as to what role he should take on: carrier, smuggler, traitor or thief from another carrier?

Cases of carriers becoming double agents, simultaneously serving the interests of rival groups, have also been reported in Kerala.

The investigation into the kidnapping and murder of expatriate Abdul Jaleel from Agali in Malappuram has led investigators into the murky world of gold smuggling and the gangs involved. Even as the investigation continues – five people were arrested on Saturday – the smugglers are actively pursuing their activities, using every opportunity they can get their hands on.

One such tool is WhatsApp, the popular cross-platform instant messaging service. A group, “COVID-19”, created on the popular platform is trapping carriers, in addition to providing “valuable information” to Dubai-based smugglers.

Details of transporters, their photographs, passport details and smuggling history are shared in the WhatsApp group, which was created after several cases of transporters becoming double agents. Recurring losses have prompted gangs based in Dubai and Saudi Arabia to act tough on cheating carriers and gangs who deceptively take away contraband.

Once a gang chooses a carrier, their personal details are shared in the WhatsApp group to know their credentials. Questions will follow, if he had ever cheated or if he would cheat. However, this act has a downside. The carrier’s cover is blown.

Stories of cheating and confiscating contraband gold are also shared in the group.

Smugglers who were active before, but now sidelined, are eyeing new sources of income. One of these sources is the reward offered by Customs and the Directorate of Fiscal Intelligence (DRI) in exchange for credible information on smuggling.

By the way, these “semi-retired” smugglers also feed information to rival gangs in Kerala. The gangs offer Rs 5 lakh to the transporter in exchange for the gold he had brought on behalf of another group. If the carrier agrees, the gang gets the precious metal for less price and risk.

Normally, five to 10 people jointly invest in smuggling gold. If one of them has decided to deceive the group, he will not put his money, but will back down without arousing the suspicion of others.

In the mood of time

The smugglers began “recruiting” those with work and family visas to transport gold after the customs service back home targeted and searched those traveling on visit visas. Those with visit visas were used as carriers earlier.

Instances of authorities finding illegal gold on children and their parents are also not uncommon at airports in Kerala.

(The United Arab Emirates is considered a safe destination because there are no strict controls there. But the situation is different in Saudi Arabia. If caught, the smuggler will be sentenced in Saudi Arabia itself. By therefore, the cost of packaging and transport operating from Saudi Arabia is higher compared to the UAE).

“Setting” at the airport

The fees mentioned above only relate to the smuggling of gold in luggage or in the body. Smugglers often go hand in hand with airport officials, who take a cut. Reaching an agreement with the authorities, the “setting up” of smuggling talks, will reduce the carrier’s costs.

The smugglers pay between Rs 80,000 and Rs 1 lakh per kilogram to officials to help them in their illegal activities. The smugglers themselves said that gold weighing more than 1.5 kg is almost always transported with the help of officials. Large quantities of gold are only smuggled with the assurance that they will reach outside the airport uncaught.

Despite the “tuning”, there have been instances where authorities have seized gold at the airport. Such incidents occur during the transfer of the “fixed” batch of officials.

Investigators found that black money in Kerala is widely used for gold smuggling. The smugglers have also admitted to active “reverse hawala” transactions in the state. Reverse hawala means providing foreign currency equivalent to the Indian rupee handed over to agents by the overseas representative.

The hawala gangs themselves also run the reverse flow, surveys have revealed. Foreign currency received via reverse hawala in Dubai or Arabia is invested in gold and smuggled into Kerala.

The inverted hawala helps hide black money. Moreover, the huge reverse profit that hawala brings in a short time encourages many to hand over black money to hawala agents. This attraction explains the uninterrupted gold smuggling despite the regular seizure of huge amounts of gold worth crores of rupees.

It has also been revealed that black money from other states is also smuggled through the hawala agents of Kerala.

There is also another group that directly smuggles gold using the currency received through reverse hawala and those that fund existing smuggling gangs.

Investigators now have another set of hawala reverse gangs operating in Kerala. They collect Indian currency from large merchants with a daily turnover of several million dollars. Merchants could be in Chennai, Bangalore or Mumbai.

The currencies thus collected are delivered to expatriates, and foreign currencies of equivalent value are deposited in the accounts of representatives of traders abroad.

In the event of a reversed hawala, the agent gives the smugglers foreign currency equivalent to the Indian rupee “deposited” in Kerala.

Betrayal with a happy ending

Setters rarely forgive backstabbers. However, one carrier, who attempted to overtake smugglers last week, was shocked and amazed after being rewarded financially.

The incident happened in Kozhikode. The transporter reached Kerala with a kilogram of gold hidden in the luggage handed over to him. He decided to betray the smugglers and gave them a slip. Once at home, he checked the luggage to the rope.

After failing to find the gold, he telephoned the smuggler to inform him that the wrong bag had been given to him. The smuggler asked the carrier to return to his residence. At the residence, the smuggler took the bag and gave Rs 10,000 to the carrier. No questions were asked.

Unbeknownst to the wearer, the gold was in the bag itself, hidden in its bead.

Smugglers also often send bogus shipments. A carrier was made to hide three capsules in her private parts. Despite all the checks, he hung out at Kozhikode airport. Customs stopped him on suspicion and, after further checking, found the capsules – “unda” in the smugglers’ lexicon – which contained nothing but clay. Smugglers call them dummy, which they often do to verify the integrity of carriers.

But then, why did the carrier remain at the airport even after carrying out the mandatory inspections? Was it to pocket the reward offered by customs and DRI? Or was it a ploy to divert attention from the real shipment of the contraband? An investigation is underway on his mobile

A: From Saudi Arabia

B: from the United Arab Emirates

Next: What caused the death of 5 people in a road accident?