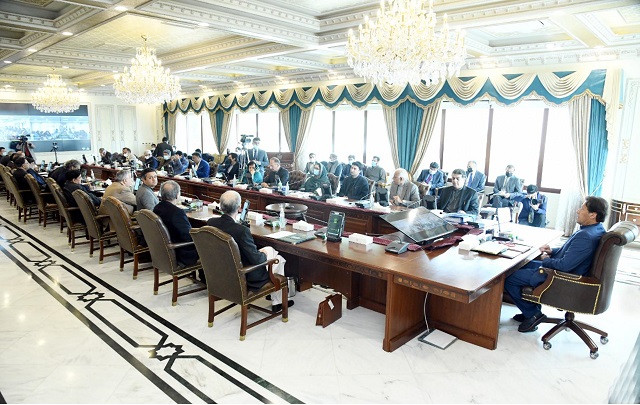 The federal cabinet on Tuesday stressed the need for a forum for consultation between the federal government and the senior judiciary on national issues to help end unnecessary delays in important administrative matters.

The cabinet, which met with Prime Minister Imran Khan in the presidency, expressed grave concern over the delays in cases related to tax collection, investment and orders to suspend administrative appointments which were causing irreparable losses to the Plublic treasure.

The meeting considered the agenda in 25 points. Ministers called for effective legislation to prevent a “culture of abusive yelling”, including allegations against high profile figures, especially women, and to launch campaigns against them on social media and some TV channels.

“It’s a huge amount of money that has created an administrative crisis, and the prime minister and the federal cabinet have expressed concern about it,” Chaudhry told reporters. “If a time limit is set for conditional sentences, it will be beneficial for the country and the people,” he added.

Chaudhry stressed that the Pakistani government Tehreek-e-Insaf (PTI) wants a setup where the government and all institutions are in harmony on all important decisions. “Prime Minister Imran Khan takes all institutions, that’s why we don’t have any conflict with any institution,” he added.

“The Opposition Will Fail”

Chaudhry said the opposition had made 13 failed attempts in the past to oust the democratically elected PTI government, adding that their current bid for a no-confidence motion against the prime minister would also meet the same fate.

He added that corrupt opposition leaders would land in jail for their looting and plunder of national wealth. “They could table a motion of no confidence if they manage to save themselves from corruption cases,” he said.

Chaudhry added that he was not considering such a move as opposition leaders would be in jail before taking the “misadventure”. Mocking the opposition, he read a verse from Urdi: “Na Khanjar Uthay Ga, Na Talwaar Unn Sey… Yeh Bazu Mere Azmaye Hue Hain.

The minister told reporters that it was evident that all major opposition parties, including Jamiat Ulema-e-Islam-Fazl (JUI-F), Pakistan Muslim League-Nawaz (PML-N) and the Pakistan People’s Party (PPP), were relegated to regional parties.

“They are united not to oust the government, but rather to obstruct the ongoing accountability campaign to reclaim the national wealth plundered by them,” he said. “It proves the Prime Minister’s prediction that all thieves will unite, when the law runs its course against them.”

The minister asked if Maulana Fazlur Rehman, Bilawal Bhutto Zardari, Maryam Safdar or Shehbaz Sharif had the strength to overthrow the government. “How those who are unable even to carry their own burden could pose a threat to the government,” he remarked.

The minister advised PPP Chairman Bilawal Bhutto Zardari and PML-N Vice-Chairman Maryam Safdar to run for mayor first before thinking about running for prime minister. “The future of the country will be bleak if tied to these leaders, they are gone and have no political future.”

Responding to a question on the live streaming of corruption cases, the Minister said the government wants the proceedings to be broadcast live so that the people and the media can know how corruption has been committed in a systematic way.

As a result, Fawad Chaudhry added, Information Minister Farrukh Habib would propose a resolution in the National Assembly for an in-depth debate on live streaming the case of opposition leader Shehbaz Sharif.

Cabinet members paid tribute to Prime Minister Imran Khan for the federal government providing free coronavirus vaccine to the people. Chaudhry said that so far a vaccine worth $2.5 billion has been given free of charge.

“We imported vaccines for more than 2.5 billion dollars. This is the reason why the deficit has increased,” the minister said. “Of this amount, we received approximately $725 million for the purchase of vaccines and the rest of the amount was obtained from various other sources.”

Criticizing the Sindh government, the minister said Chief Minister Murad Ali Shah claimed to have purchased the vaccine, but the Economic Affairs Division’s filing showed the province did not spend even a single dollar on it. purchase of the vaccine.

Decisions taken by the cabinet included allowing international automaker Peugeot to import its vehicles for testing to start an automotive business in Pakistan, and allowing 34,500 tons of pulses to be exported to Afghanistan in the under the World Food Program for humanitarian reasons, Chaudhry said. .

Ministers approved the agreement with Saudi Arabia for the deferred payment of an $821.8 million loan. Chaudhry said that by 2027, a total of around $4 billion in repayments would be deferred, adding that the amount would be used for the country’s development.

The cabinet also approved a 15% disparity reduction allowance for federal government employees in grades 1-19 in addition to paramilitary FC and Rangers. On another question, the Minister said that if oil prices increase in international markets, they will also increase in Pakistan.

Chaudhry said the cabinet had approved the creation of special courts to help Pakistanis abroad, adding that the Ministry of Justice was responsible for drafting laws. “These courts will ensure speedy trial of cases relating to expatriate properties,” he added.

He said the cabinet had approved the reconstitution of the board of the State Life Insurance Corporation (SLIC) on the recommendation of the Department of Commerce. Ministers also approved the appointment of Dr Naveed Hamid as a member of the Monetary Policy Committee for three years.

Read more: Fawad predicts opposition leaders will be in jail ahead of no-confidence decision

The cabinet authorized the extension of the duration of international bonds issued for the economic stability of the country, ordering the ministries of finance and justice to hold consultations to grant them administrative and institutional protection.

The minister approved the country’s first-ever digital cloud policy, which was designed to protect digital data in government institutions in accordance with international standards, the minister said. The policy would help train the workforce for cloud computing, timely use of data and efficient use of resources.

The cabinet approved in principle the Personal Data Protection Bill-2022, which aimed to prevent unauthorized access to personal information and its misuse. International data protection rules and regulations would be part of the bill and his draft would be sent to the law committee.

He said the cabinet had approved the transfer of 33.5% operating and working shares of China Zenhua Oil to Pakistan Petroleum Limited (PPL) in the Baska block. He agreed to the appointment of Brig (retired) Tofique Ahmad as Director General of the National Institute of Electronics.