Frustration boils over at the town council meeting; Councilors Respond to Revocation Petition 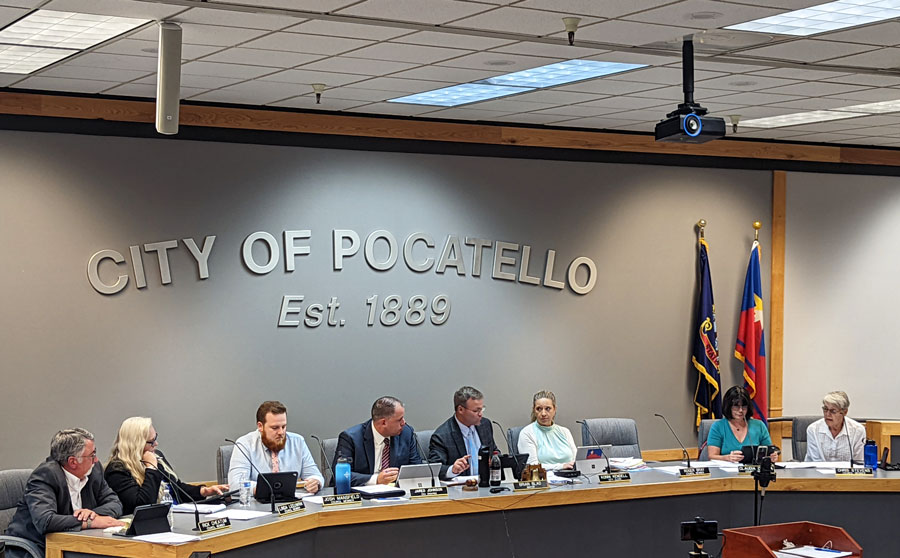 By the time the meeting adjourned, Councilor Roger Bray had been censured, Councilor Claudia Ortega had already left the council chamber, and several members of the audience were trying to calm others down.

A pre-vote discussion to censure Bray lasted nearly 40 minutes and included Ortega demanding the immediate resignation of Pocatello Police Chief Roger Schei. The same discussion included several heated exchanges between Mayor Brian Blad and Ortega and Chris Stevens, as well as a brief exchange between Ortega and the Pocatello Police Sgt. Akilah Lacey, who was in the audience.

Blad interacted with council members several times during the lengthy discussion, but held his statement just before opening the resolution to a vote. In that statement, he called the need for the discussion and the comments “deplorable.”

“Before I vote, I just need to say a few words,” Blad said. “Maybe I shouldn’t say anything because it’s difficult. I can’t think of a worse thing to discuss in the city leadership right now than racial diversity. »

The discussion took place after comments were made regarding diversity at both July board meetings.

At a budget meeting on July 7, Bray objected to the city’s need for two additional police officers, proposed by Schei. Bray said the current number of officers is sufficient “because we’re not as diverse a community as some are.”

After being challenged on this statement by two board members of the Pocatello branch of the NAACP at the July 21 board meeting, Bray engaged in a discussion with those board members.

What exactly happened during this discussion has been left to hearsay.

Some who claim to have been present, including Councilman Josh Mansfield and Blad, said Bray argued for his views, making the situation worse. Others, including Ortega and Stevens, said the argument was forced by outside antagonists, which Ortega said included Schei and other police officers.

EastIdahoNews.com requested comment from the NAACP Pocatello branch but did not receive a response.

Council Chairman Rick Cheatum said he “strongly believes” the council has an obligation to the citizens of Pocatello to condemn Bray’s comments. And that is what censorship amounts to: the public and official condemnation of the statements made by a civil servant.

“We have to say, through this censorship, that we disagree with Roger, that’s not the policy and that’s not the official sentiment of our city and this city council,” he said. Cheatum said.

During her statement, Ortega read a line from a grant application filed by Schei. In the application, Schei referenced the expansion of Northgate and “passenger” construction workers who are placing additional strain on department resources.

Ortega claimed that statement was racist and equal to those made by Bray. She then approached Lacey, the police sergeant, asking if her frustration with Bray for those comments matched her anger with Schei.

When Lacey responded, he redirected to the July 21 meeting and an exchange he had with Bray while addressing an op-ed Bray wrote for the Idaho State Journal, in which Bray said diversity can mean a lot of things and that he was being targeted without being allowed to explain himself.

“I asked him a question, ‘Does diversity mean if there were more black people or more Asian people here?’, and he said yes,” Lacey said. “I asked him to clarify the diversity.”

Lacey also said the word “transitional” does not refer to race. Ortega had previously argued that by “transient day laborers,” Schei was referring to the “minority day laborers” who make up the “majority” of those transient workers.

While targeting Schei’s comments in the grant application, Ortega publicly called for the police chief’s resignation.

“Since we all agree that racism is wrong, it’s ignorant and it’s abhorrent, I call for the immediate resignation of the Chief of Police for his racist comments,” she said. . “If he does not resign, I will call a special meeting to discuss his withdrawal.”

Following extensive back and forth and closing comments from Blad, the council voted in favor of both reaffirming Pocatello as a welcoming city and censoring Bray.

As has so often been the case with this advice, however, the vote itself was a debate.

After a motion to separate reaffirmation and censure failed, Ortega and Stevens both refused to vote for the two points as one. Both voted in favor of the reaffirmation but against censorship.

Blad tried to take Ortega’s vote as a yes to both sides of the agenda item, but Ortega again challenged the mayor, saying, “No, I’m not voting censure.” Don’t put words in my mouth.

City Attorney Jared Johnson ended the debate by saying the vote would be cast as Ortega and Stevens had stated in council minutes – which they had voted against.

Because Bray was not present, having tested positive for COVID, the vote of no confidence passed, 3-2. The reaffirmation received a unanimous 5-0 vote.

The last item on the agenda called for public comments. Generally, these comments should not relate to anything discussed by the board at this meeting.

Lacey spoke first. Instead of talking about Bray and the censorship, he brought up Thursday the 20th anniversary of his moving to Idaho to play football at Idaho State University. He spoke of being sucked into Pocatello — what he called a void — and pursuing his own part of the American dream in his adopted home.

Ali Khan, another resident, also spoke during this part of the meeting. However, he began his comments by addressing Bray.

“I was going to speak to council member Bray,” Khan said, “but since I was told he was ill, I hope and pray that he will be better very soon – and come back and sit in his seat so he can resign.”

As he continued to address the city’s diversity and Bray’s Journal article, Stevens challenged Blad to stop the comments as they pertained to a point discussed by council at that meeting.

Blad decided to allow comments, saying they were unrelated to the agenda item.

“You keep making up the rules as long as it suits your political purpose, Brian. You are ridiculous,” Ortega said as he rose from his seat and walked out of the boardroom to cheers.

A petition recently filed with the Bannock Council Elections Office calls for the recall of council members Bray, Ortega and Stevens.

The petition, which now requires some 6,000 signatures for a recall vote to be scheduled, cites an “accumulation of belligerent behavior” from the three council members.

“Things like a (hostile) work environment for employees, Bray and Ortega’s decision to break quorum on May 19, Ortega’s infamous ‘hit list’, the fact that Bray is attracting d other council members and Stevens bullying city staff have resulted in a dysfunctional city council. says the petition. “The citizens of Pocatello are fed up with this situation. Changes need to be made. »

Prior to Thursday’s meeting, Ortega told EastIdahoNews.com that she recognizes the petitioners’ right to request a recall.

“I just know what my actions and my words are based on, and I’m comfortable with that,” she said. “I can sleep at night and I can look at myself in the mirror. I have never compromised my integrity.

The petition claims that Stevens worked contrary to his campaign platform.

“I chased all the goals for the platform I ran on and I have a clear conscience,” she said.

“We raced to try to get more transparency, we raced to get more spending restraint, and we’ve been fighting for that for two and a half years now,” Ortega added.

The two councilors said they fought for transparency and budgetary restraint, but were cut short in their attempts.

At a recent meeting, Stevens requested payroll information for city staff — for review, she said.

On Thursday, having not yet received this information, she again requested it. After a heated exchange with Blad, Stevens said she would file a public records request, since Blad and the city would not provide that information.

Regarding the petition and the idea that Ortega and Stevens’ efforts have not been for the betterment of the city, Ortega replied, “Attitude reflects leadership.

“Part of the problem is that the powers that be don’t like to be questioned. They like things to continue as they always have, which is to say, by simply having things approved. They don’t appreciate the fact that two women aren’t submissive enough to do this. … As I said, attitude reflects leadership – and by that I mean the mayor,” Ortega said.