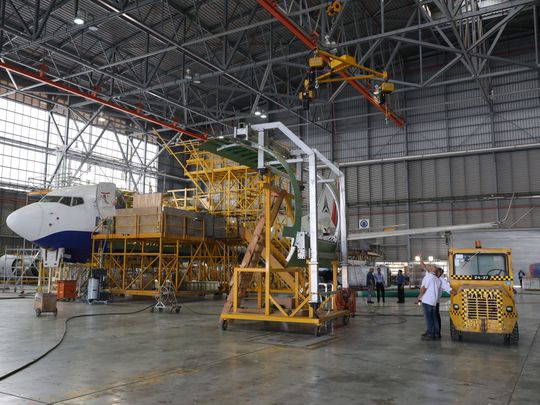 Dubai: The United Arab Emirates market will play a central role in pushing Israel Aerospace Industries for a greater share of the growing global demand for freighters. The Israeli company has already signed freight conversion agreements with Emirates airline and Etihad Airways of Abu Dhabi.

“The issue of converting passenger planes to cargo is very ‘in’ at the moment as the pandemic has changed the relationship between passenger planes and cargo,” said Shmuel Kuzi, executive vice president and chief executive officer. general of the Aviation group of IAI.

IAI’s conversion center in Abu Dhabi will serve global demand and also arrive at an opportune time. The company will begin converting two very popular aircraft models – the Boeing 777 and the Airbus A330 – over the next few years.

At the Dubai Airshow in November, IAI signed an agreement with Emirates Skycargo to convert four passenger Boeing 777-300ERs into full cargo planes. The deal also included an option for further conversions to the Boeing 777-300ER at a later stage.

The deal with Emirates was the “first step” as the company only recently developed a solution for the 777, Kuzi said, adding that IAI was open to the possibility of working with other UAE-based carriers. “The demand is high, but we want to work only with elite companies,” he added. “The Coronavirus has accelerated a lot of things and this conversion trend will be valuable 10 years from now because the difference between the cost of a new cargo plane and a converted plane is huge. It’s about two or three times more expensive to buy a new plane.

Omicron adds to the woes

The IAI executive said the company was doing “everything” to make the supply chain work even in the current situation. “We have to think about all the threats – we have the Omicron variant and in two weeks we’ll have something else,” Kuzi said.

We’re going to stay in this situation – not for a year or two. We will stay here with this problem for a long time.

IAI plans to sell 25% of the company to the Tel Aviv Stock Exchange in the first half of 2022, according to reports. The potential listing, first announced in 2019, has encountered several hurdles due to regulatory approvals and security concerns. There was also talk of allowing only Israeli investors and institutions.

“There has been a lot of interest from around the world and even from Israel as well,” the official added. “The idea isn’t ripe yet and we’ll talk about it when it’s ready. We are more than happy to take this step as it will put us in a good position and allow us to make more investments. “

Prior to his current role, Shmuel Kuzi led the initiative to unite the engine, accessories, flight lines and MRO (maintenance, repair and operations) plant into a single business entity within the aviation business. of IAI, and was General Manager of the Unified Business Line. – the Bedek-MRO division.

When COVID-19 hit the airline industry in March 2020, two-thirds of the world’s cargo tonnage was carried on passenger flights. Passenger fleet services have still not returned to normal and, as a result, capacity is still lagging behind demand.

Meanwhile, demand for freight continued to soar, with consumers flocking to e-commerce platforms and online shopping websites to purchase goods. As the shipping industry grapples with severe traffic jams and supply shocks, freighters have become even more important.

Freight demand – expressed as freight tonne-kilometers (CTK) industry-wide – increased 8.7% in the three months ending October 2021 compared to the same period in 2019. the second quarter due to supply chain issues and inflation, but they remain largely in favor of air cargo, ”the International Air Transport Association (IATA) said in its report earlier this month .

“Air freight continues to outperform other modes of transportation as it is competitive in both price and speed as businesses rush to meet demand during the key end-of-the-year period. year.”