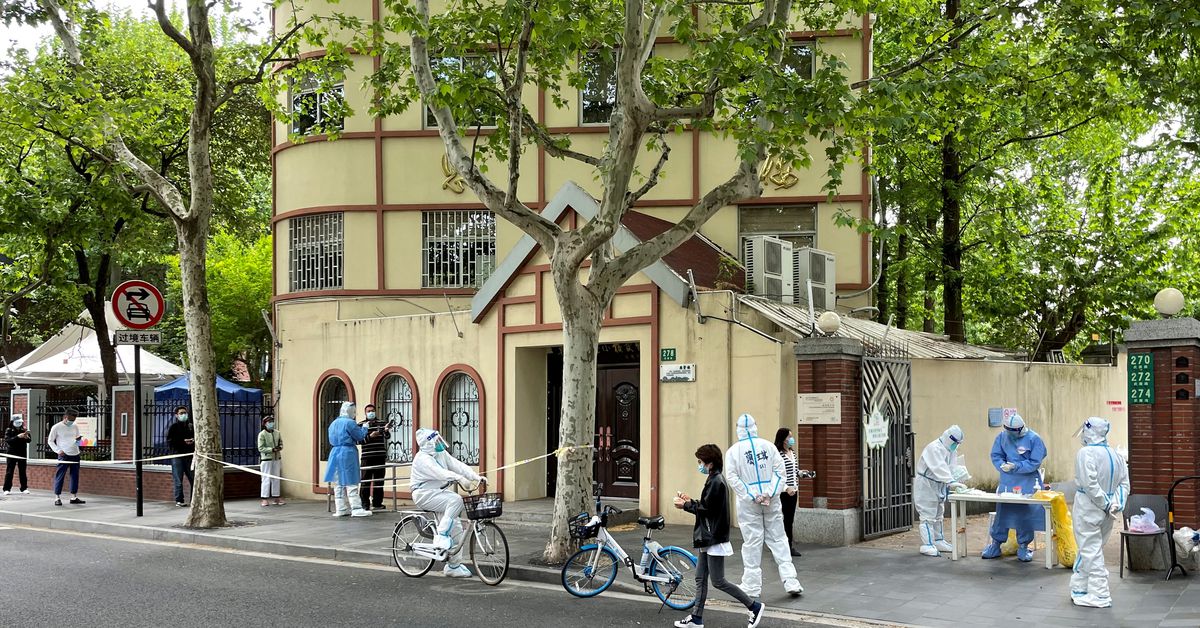 SHANGHAI, April 29 (Reuters) – Shanghai’s harsh COVID-19 lockdown is pushing dozens of foreign residents to flee the mall, shaking the appeal of mainland China’s most cosmopolitan city and prompting others to rethink their future in the metropolis.

Although no official statistics are available for departures in recent weeks, pet movers, real estate agents and law firms say they are seeing a sharp increase in departure requests, while groups of online chat swapping tips on how to leave town amid the lockdown restrictions have swelled.

“Normally we get around 30 to 40 cases a month, but we had over 60 in April,” said Michael Faung, founder of international pet movers Shanghai M&D pet.

The city of 25 million people is the Chinese base for many multinational companies and has long attracted expats drawn to the international vibe of areas such as the French Concession, where shops and cafes line shady alleyways.

But China has seen a steady flight of foreigners since the 2020 COVID-19 outbreak in Wuhan and subsequent entry restrictions have slowed new entrants.

Shanghai was officially home to 164,000 foreign residents last year. That compares to 215,000 work visa holders in 2018, according to government data, which did not include their dependents.

The last straw for many was the month-long lockdown, 10 overseas residents told Reuters, describing how they struggled to get food and feared being separated from family members if they were infected with the COVID.

“Until the lockdown, I really couldn’t feel the authoritarian government, because you’re more or less free to do what you want and I’ve never really lived oppressed,” said Jennifer Li, a foreigner who plans to send his family away. the city that has been their home for 11 years.

The handling of COVID “made us realize how unimportant human lives and human mental health are to this government,” she added.

The Shanghai government did not respond to a request for comment. China says it must stick to its zero-tolerance approach given the danger the Omicron variant poses to people with underlying health conditions, the elderly and unvaccinated.

Foreign chambers of commerce have warned against the flight of foreign talent.

The “number of foreigners in China has halved since the start of the pandemic and could halve further this summer,” Joerg Wuttke, president of the European Chamber of Commerce, said at a recent forum.

Britain’s Wellington College International Shanghai, which charges up to 348,000 yuan ($53,270) a year, sent a letter to parents on April 15 saying some of its teachers wanted to go home.

He also said he understood some families were reconsidering their future in Shangahi and extended the deadline for parents to withdraw their children from school, according to a copy of the letter seen by Reuters.

Wellington College did not respond to a request for comment.

An April survey by the US Chamber of Commerce found that 44.3% of respondents said they would lose expatriate staff if current COVID restrictions remain in place next year.

The Shanghai curbs were originally only supposed to last five days, but dragged into their fourth week with little clarity on when they might lift.

Some of those who managed to leave describe harrowing efforts to get to the airport, from paying $500 for a taxi that usually costs $30, to battling neighborhood workers who block departures , or being stranded at the airport after the abrupt cancellation of their flights.

One described how she and her five-month-old daughter spent nearly a week sleeping on the ground at Pudong airport, running out of food, when documentation issues for her baby left her. prevented him from taking his flight. The lockdown has closed visa offices and many administrative businesses in the city.

The woman does not plan to return to Shanghai, declining to give her name for privacy reasons.

“With what I faced, just let me go back to my country and do something there,” she said.

Pudong Airport did not respond to a request for comment.

Reporting by Engen Tham in Shanghai and Xie Yu in Hong Kong Additional reporting by Zoey Zhang and David Stanway in Shanghai; Editing by Brenda Goh and Lincoln Feast.