Earnings in Philippine pesos: For every $200 you send, how much do you receive? 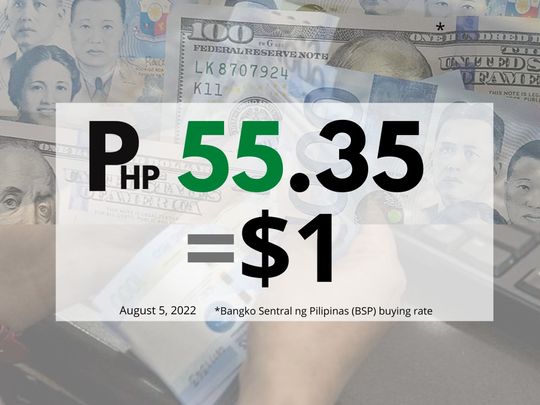 Manila: The Philippine peso gained 0.6% on Friday as it continued its rebound against the US dollar amid falling global fuel prices.

The local currency appreciated in the first week of August, rising from an 18-year low of Php 56.52 against $1 on July 18, to close at Php 55.22 on Friday August 5, thanks positive market sentiment.

While the Philippines has recouped lost ground, UAE expats looking to send more pesos home may continue to enjoy great, if not better, rates in the coming weeks.

Analysts forecast a decline in the Philippine currency for the rest of 2022 and into 2023, due to fundamental challenges, including consecutive hikes in US Fed policy rates (which boost the value of the US dollar) and the huge Philippines current account. deficit that makes rising inflation a feature of the economy.

Phisix, the country’s benchmark stock index, rose for the third day in a row on Thursday (August), before profit taking pared the week’s gains by 77.61 points, or 1.20%, on Friday.

The drop in oil prices this week came on the heels of reports of an unexpected increase in US crude oil and gasoline inventories last week. Concerns over the oil supply crisis have also eased in recent days after supply flows from Libya and gas supplies from Russia to Europe resumed.

Additionally, the Organization of the Petroleum Exporting Countries (OPEC)+, including Russia, had agreed to raise its oil production target by 100,000 barrels per day, or about 0.1% of global oil demand.

The peso’s rise came after a higher-than-expected Philippine inflation rate of 6.4% in July, down from 6.1% in June, according to the Philippine Statistics Authority.

In a briefing, national statistician Dennis Mapa said the rise in inflation was mainly due to faster increases in the prices of meat and fish, gasoline and transport, and electricity.

The July report raised the seven-month average (January to July) to 4.7%, which is above the upper limit of the government’s target range of 2 to 4%.

Earlier, a BSP official said he expects inflation to remain high for the rest of this year, but is expected to decline in 2023 – and stabilize within the target in 2024.

The overall price of goods and services in the country has been on the rise since February.

The Thai baht appreciated 1% on Friday ahead of a central bank meeting next week that should see the tourism-dependent country finally join its regional peers in the policy tightening, while the South Korean won s also strengthened by 1% thanks to strong inflows.

Investors were awaiting widely anticipated U.S. jobs data amid growing fears of a recession. The baht strengthened as much as 0.9% to hit a one-month high as investors eyed next Wednesday’s Bank of Thailand (BoT) meeting, which should largely mark the start of the normalization of its policy to stem the surge in inflation.