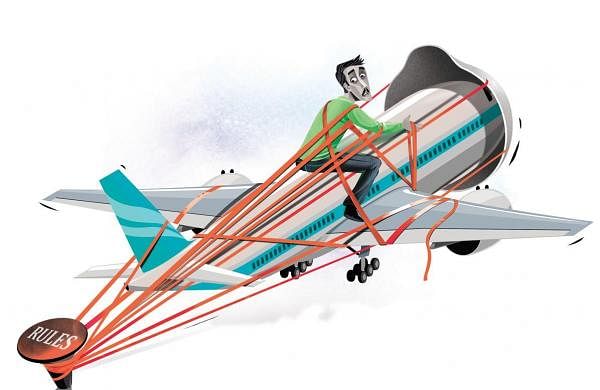 THIRUVANANTHAPURAM: The focus on people arriving from overseas to prevent the Omicron surge put them at a disadvantage compared to the local population. Keralite expats visiting the state are hit the hardest as boarding and quarantine rules will cost them money and peace of mind. The rules are getting stricter at a time when health experts have said it makes little sense to focus only on international travelers to prevent a virus that has already made its way into the community.

The state reported 5,296 new positive Covid cases and 27,859 active patients on Friday. The number of people newly infected has almost doubled in 10 days. In other states, the numbers have seen a huge increase which health experts say is being led by Omicron. The central government has made it compulsory for passengers arriving in the country to carry an RT-PCR negative certificate obtained 72 hours before the flight. The test result should then be uploaded to the Air Suvidha portal.

However, expats complain that they face an undue delay in obtaining test results, forcing them to reschedule flights or cancel tickets altogether. Travel problems increased after the government recently removed exceptions for emergency travel such as the death of a relative. “I had spent hours in the hospital getting my samples tested. When it became apparent that there would be a delay in getting the results on time, I postponed my trip. However, I was unable to board the rescheduled flight because the results took longer than expected, ”said Sujith S, who works in Doha.

He said travelers like him are affected because there are no clear instructions to follow in such circumstances. Gulf countries, particularly Qatar, are facing an increase in Covid cases which is expanding their testing capabilities. “We have addressed the issue at different levels, including the Indian diplomatic mission in Qatar. These restrictions and delays are a cause for concern for people who have already booked their tickets, ”said K Harikrishnan Namboothiri, managing director of Norka Roots, the government agency that serves as a forum for dealing with the issues of non-resident Keralites.

“Unfortunately, these problems have arisen at a time when people, who were hit hard in the first two waves, are making a comeback in the Gulf countries,” he added. Health experts have called the testing and quarantine rules targeting international travelers illogical. “The rules targeting travelers serve no other purpose than customary. It is wrong to assume that only travelers are carriers of the virus. It is spread locally and most of them go undetected, ”said Dr NM Arun, internal medicine specialist and public health activist.

According to him, practical measures should be adopted to help people visiting States of origin for various purposes. People under home quarantine should be allowed to go outside and carry on their activities if they test negative from a rapid antigen test taken the same day, Dr Arun added. The central government imposed stricter quarantine rules for all international travelers from January 11. All passengers who test negative are to undergo a seven-day quarantine and retest on day eight, followed by health monitoring for seven days.

However, treatment guidelines released by the Department of Health and Family Welfare on January 5 took a practical approach to dealing with the Omicron surge. These only require a home quarantine on the same day for people with mild or asymptomatic Covid. They are released if there is no fever for three consecutive days and there is no need to retest. In the case of travelers infected with Omicron, the state government had issued a statement that they should only be released after being monitored for a few days, even if they tested negative for Covid.

In a dead end