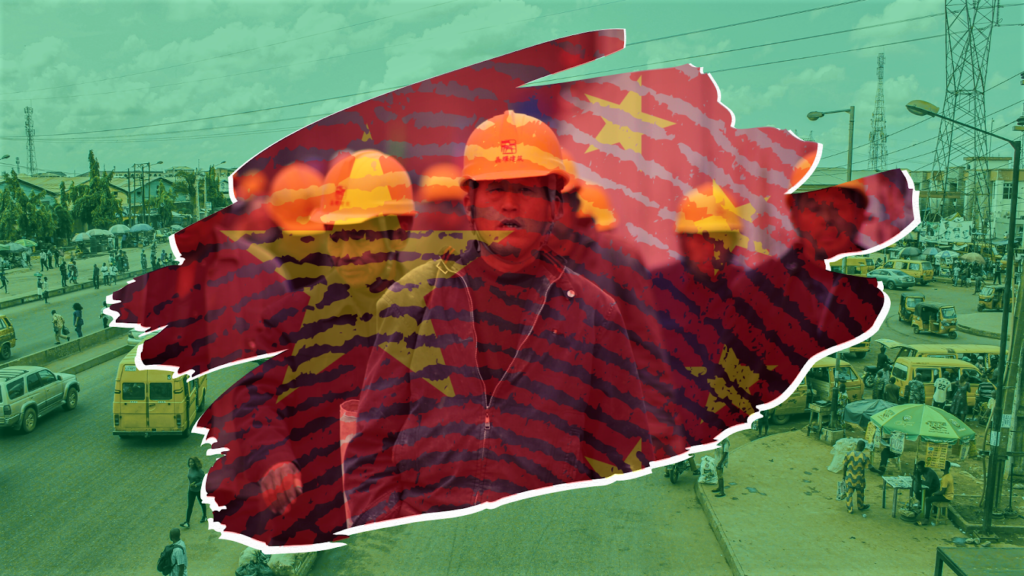 Chinese manufacturing investment in Africa is said to be the continent’s best hope “to industrialise in this generation”. But in Nigeria, growing insecurity could threaten that prospect.

The strong diplomatic relations and economic ties between China and Nigeria, which date until at least the 1970s, contributed significantly to the migration of people in both countries.

About 30% of Nigeria’s imports arise from of China, according to the Observatory of Economic Complexity. The Netherlands and India come in second and third place with 11% and 7% respectively. China is also among the country’s top export destinations.

The China Global Investment Tracker also estimates that Chinese companies invested nearly $41 billion in Nigeria in July 2021, with most of these resources channeled into transport, construction, science and technology, and energy. The international public construction company, China Civil Engineering Construction Corporation (CCECC), has almost 20,000 employees in Nigeria and is in charge of more than 120 construction projects.

Data compiled by the China Africa Research Initiative shows that in 2020, there were 8,616 Chinese workers in Nigeria. This represented 8.3% of the total number of Chinese residing in Africa, second only to Algeria. Since 2012 and before the COVID-19 pandemic, the number has steadily increased, unlike other parts of the continent. The population could be more too – between 40,000 and 50,000 in 2017, according Chinese Ambassador to Nigeria Zhou Pingjian.

The safety of the citizens of the Asian country, however, remains a concern.

What the numbers say

Data collected by the Nigeria Security Tracker (NST) shows that Chinese nationals in the country have been victims of gun violence for a long time – as far back as 2012. Prior to that time, incidents involving Chinese establishments seemed would have been more frequent in southern Nigeria where the oil companies were present.

Analysis of the numbers shows that between June 2012 and June 2022, there have been at least 29 incidents leading to the murder and abduction of Chinese nationals. In another event, a kidnapping attempt was foiled by the police.

During the 10-year period, at least 12 Chinese workers were killed, mostly by local armed groups, while 39 others were kidnapped. There have also been cases where workers have been kidnapped in neighboring countries like Cameroon by terrorist groups based in Nigeria.

Other deaths were recorded between 2012 and 2014, particularly in the northeastern state of Borno. It had by then become the hotspot for the Boko Haram insurgency that erupted in 2009, making many communities unsafe for government and corporate projects.

From late 2014 to the present, Chinese workers were more likely to be kidnapped than killed, with most kidnappings taking place in north-central and southwestern Nigeria.

Not all incidents are listed in the security tracker. For example, in March 2021, the Nigerian Army declared that he had secured the freedom of 14 members of a Chinese fishing boat who had been kidnapped by pirates after paying a ransom of $300,000. Ten of those abducted were foreigners, including six Chinese, three Indonesians and one Gabonese.

Although there have been no reports of attacks on Chinese expatriates since May 2014, Borno remains the state with the highest number of incidents. This is followed by Ebonyi, Nasarawa and Osun, each recording three incidents; then Ekiti, Kogi, Lagos, Niger and Taraba, where there were two incidents each. Finally, Edo, Kaduna, Osun, and Zamfara each had an incident.

The economic nature of Nigeria’s relations with China is reflected in the occupation of Chinese citizens who are victims of local armed violence: construction workers, engineers, miners, employees of oil exploration companies.

The various violent incidents have also resulted in the deaths of security personnel, many of whom serve as escorts for company personnel. At least 10 security guards were killed between 2012 and 2022 during the events studied by HumAngle.

Although there are no official statistics to support this, a review of news reports suggests that Chinese nationals make up a larger portion of the foreigners who have been caught up in the local conflict web. Others include citizens of Burkina Faso, France, Ghana, India, Italy, Lebanon, United Kingdom, and United States, among others.

The rise of insecurity in Nigeria has, for a long time, has been a source of concern for the Chinese authorities, who have offered peacebuilding and military support.

“The Chinese central government is really concerned about the security situation in Nigeria and also about Chinese nationals in Nigeria,” said its ambassador to Nigeria, Cui Jianchun, said last December.

Charles Onunaiju, director of the Abuja-based Center for Chinese Studies, recalls that a senior official from China’s Ministry of Public Security recently spent several months in Nigeria, “engaging Chinese companies and looking for ways to ensure their safety”.

One of the consequences of insecurity in the region is that many development projects have been deferred across the country because of the risks faced by workers. These include the construction of the Kano-Maiduguri Roadthe Kano-Kaduna Railway Lineand the Lokoja-Benin roadwhere four Chinese expats were kidnapped and released only after a ransom was paid.

At the start of the insurgency in northeast Nigeria, Boko Haram specifically targeted foreigners working with construction giants such as Julius Berger and Dantata & Sawoe.

“The plan is that after the abduction, they transport their victims to their counterparts in Algeria in exchange for weapons or demand money for a ransom, as the case may be,” confessed an arrested member of the terrorist group.

In 2016, the Borno government complained that road and bridge construction projects located in the state capital, worth around ₦17 billion ($40.9 million), could not be completed due to insecurity.

“We are very frustrated by this development,” observed Commissioner of Works and Transport, Alhaji Adamu Lawan. “This prevented the transport of road construction materials and equipment to the sites; while the lives of site engineers were threatened, including the murders of some contract partners in 2013 and 2014 at three different project sites in Borno State.

Despite these challenges, Chinese companies have shown resilience. Unlike some other foreign contractors, they continue to venture into relatively insecure parts of the country to execute projects.

“There are two things on the table there,” said Fikayo Akeredolu, an expert on China-Africa relations and Chinese economic expansion.

“First, a lot of people forget that deep down, China is actually still a developing country. And that’s why you’ll find Chinese people and Chinese nationals going to places where developed investors and developed economies don’t won’t go because for them it’s nothing crazy. Secondly, China desperately needs soft power.

Will China slow down investment?

There may soon be a decline in the number of Chinese expatriates residing in Nigeria.

The Chinese government is reorganizing its priorities and now more reluctant to fund iconic construction projects in places like Nigeria. This is partly due to tight budget constraints, the economic costs of its “zero Covid strategy” and concerns about the ability of low-income countries to repay their debts. If this continues, it means that with fewer projects to work on, the population of Chinese workers in the country could decrease.

Growing insecurity in Nigeria, however, does not yet appear to be a major deterrent. This is partly due to the belief of the Chinese government that security challenges are best addressed with increased development.

So what should be done to protect Chinese nationals and investments in Nigeria?

Fikayo suggests that one way to achieve this is to enforce visa rules for visiting foreigners, requiring them to register not only with the immigration department but also with the police, and shedding light on the borders that must not be crossed for their own safety.

For Onunaiju, the Nigerian government must intensify its efforts to restore public order, thus making the country more attractive for investors.

“Security is fundamental for people who bring money and expertise,” he insists. “We must take steps to reduce these [violent] incidents and make here welcoming.

He adds that there is more room for cooperation between countries, especially in the security sector, and that Nigeria will generally benefit.

“Of course, if we do more on security, I think the Chinese will do a lot more, especially in some projects like the Belt and Road and accelerating development. I think security is the basis of all that.

There are millions of ordinary people affected by conflict in Africa whose stories are missing from the mainstream media. HumAngle is committed to telling these difficult and under-reported stories, hoping that those affected by these conflicts will find the safety and security they deserve.

To make sure we continue to provide public service coverage, we have a small favor to ask of you. We want you to be part of our journalistic enterprise by bringing us a token.

Your donation will further promote a strong, free and independent media.