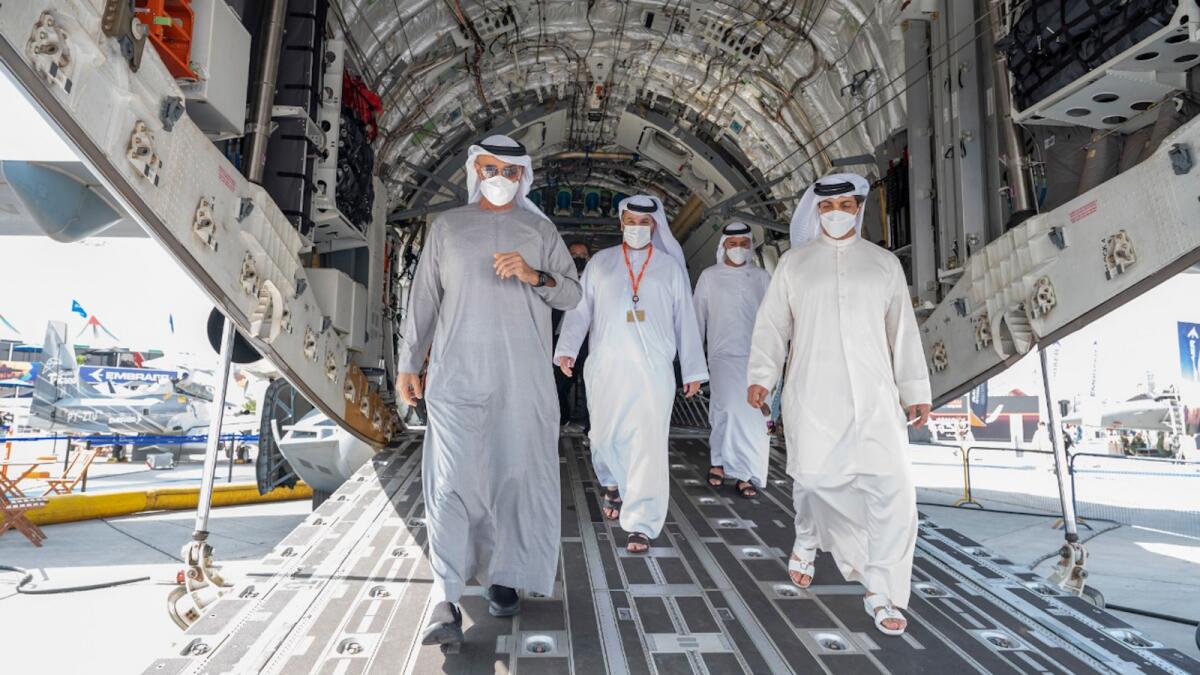 He promoted peace, championed environmental causes and inspired the world with his humanitarian work

The rulers, leaders, government departments and people of the United Arab Emirates have pledged allegiance to the new President, His Highness Sheikh Mohamed bin Zayed Al Nahyan. MBZ, as he is popularly known, is a popular leader who has served the UAE for decades. He promoted peace, built bridges of tolerance, championed environmental causes and inspired the world through his generosity and humanitarian work.

Here are the 12 achievements that highlight the different facets of his leadership:

In 1979, Sheikh Mohamed bin Zayed joined the prestigious Royal Military Academy Sandhurst, where he trained in armour, helicopter piloting, tactical piloting and paratroopers. After graduating in April 1979, he returned home to the United Arab Emirates to complete the officer training course in Sharjah. He held several positions in the UAE Army, as an officer in the Amiri Guard (the UAE’s elite security force) and as a pilot in the UAE Air Force.

Ambassador for Peace, Tolerance and Coexistence

The President of the United Arab Emirates has extended bridges of communication and peace with all leaders and people around the world. He has promoted a culture of tolerance to end many global crises while protecting the nation and region from the looming threats posed by those who falsely don the mantle of Islam to incite extremism and terrorism.

After the United Arab Emirates named 2019 the “Year of Tolerance”, Sheikh Mohamed received Pope Francis, head of the Catholic Church, and Dr. Ahmed Al-Tayeb, Grand Imam of Al-Azhar Al-Sharif. The global meeting in Abu Dhabi resulted in the signing of the Document on Human Fraternity which will serve as a guide to promote a culture of mutual respect and dialogue for peaceful coexistence and brotherhood.

Sheikh Mohamed bin Zayed has taken historic stances to strengthen cooperation and solidarity with fellow Arab nations and stand by their side. It has never hesitated to support regional stability and to take up all the challenges and threats that affect its stability, foremost among which is terrorism.

Internationally, the President of the United Arab Emirates has always taken the initiative to stop global conflicts, appease struggles, defuse disputes and achieve reconciliation. He seeks world peace and an end to bloodshed to protect human beings and preserve their dignity.

He devoted himself to the service of humanity and to assistance to brotherly and friendly countries. It has facilitated agreements that convey messages of peace, coexistence and cooperation. He also led the country’s humanitarian arm, Emirates Red Crescent, as well as other charitable societies, to help people affected by wars or the effects of disasters and crises.

Sheikh Mohamed bin Zayed’s efforts helped make the UAE one of the first countries to successfully defeat the pandemic and transition to recovery and normalcy. Vaccines were made available free of charge to all citizens and expatriates.

He has also sent various material and in-kind aids to sister and fraternal nations during the pandemic.

He launched the Reaching the Last Mile Fund to raise $100 million to eradicate and control preventable diseases that impair the health and economic prospects of the world’s poorest people. He has committed $20 million to the Fund, and the Bill & Melinda Gates Foundation has pledged up to $20 million. This 10-year fund aims to support the elimination of two debilitating and preventable neglected diseases: river blindness and lymphatic filariasis.

Take care of the environment

He was instrumental in establishing the Abu Dhabi Environment Agency and has led major conservation efforts to protect houbara hawks and bustards in the United Arab Emirates and abroad.

He has plans in place to relocate the oryx from Arabia. In 2008, he announced that the government of Abu Dhabi would contribute $15 billion to Masdar, the global alternative and renewable energy standardization initiative and developer of the world’s first carbon-neutral, zero-waste city.

The President of the United Arab Emirates is known for his unwavering commitment to improving education standards. Since Sheikh Mohamed took over as Chairman of the Abu Dhabi Education Council, he has worked tirelessly to forge partnerships with prestigious world-class educational institutions and think tanks, a number of whom have by subsequently announced their intention to establish a base or join strategic groups. joint ventures with existing academic institutions.

Sheikh Mohamed is known to be the driving force behind many initiatives that have helped sustain and guide Abu Dhabi’s economic growth and diversity. He is also credited with the construction boom achieved in the emirate. He once said: “In 50 years, when we may have the last barrel of oil, the question is: when it is shipped abroad, will we be sad? If we invest today in the right sectors, I can tell you that we will celebrate then.”

Everything related to culture

Abu Dhabi has transformed into a global cultural destination under the leadership of Sheikh Mohamed. The emirate is now home to the Saadiyat Cultural Quarter, a forum for global culture; Louvre Abu Dhabi; Manarat Al Saadiyat, an arts and cultural center; and Zayed National Museum.

Sheikh Mohamed ensured that Jiu-Jitsu was taught in all schools in the country and he helped establish more martial arts training centers.

The country has hosted major UFC fights featuring some of the best fighters in the world including Khabib Nurmagomedov, Conor McGregor, Anderson Silva and Kamaru Usman.

Under his visionary leadership, the capital of the United Arab Emirates is set to host NBA games later this year.