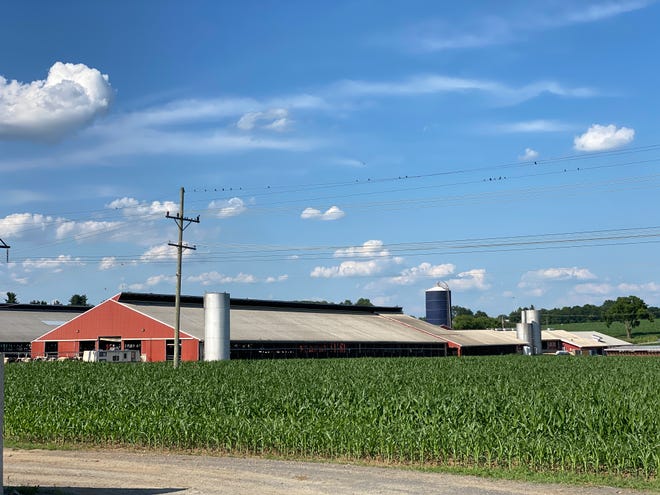 Members of Congress from all over Pennsylvania as well as Louisiana, California and Tennessee visited Burk-Lea Farms in Chambersburg.

Friday’s roundtable and farm tours were intended to give elected officials a perspective of the American dairy farmer and their needs in view of new legislation that will be introduced in the coming months.

Other attendees included members of Oakleigh Farm, Fantasyland Farm and the Center for Dairy Excellence Foundation of Pennsylvania.

To better understand the current climate on farms in Pennsylvania and across the country, congressional leaders toured the farm in a tractor-drawn covered wagon and made several stops to learn about conservation and life at the farm.

The locations included the dairy cow housing area, the feed storage and the manure separation area, all of which are essential to understanding the daily operation of a farm.

Burk-Lea Farms, at 3099 Grand Point Road north of Chambersburg, partners with the Maryland & Virginia Dairy Milk Producers Co-Op and produces 68,000 pounds of milk a day. To do this, the 12-person staff works in shifts, milking each cow several times a day in the farm’s milking parlour.

“Dairy is our biggest product here in Pennsylvania,” said Thompson, who lives in Center County. “Part of being here is so we have farm-tested ideas to come back with. We want to make sure the voices of essential America are included, like here at Burk-Lea Farm.

Third-generation owner of Burk-Lea Farms, Clint Burkholder, shared the challenges farmers like him face in today’s economy, which is experiencing record inflation.

“Costs are going up, it’s almost a 50% increase for animal feed,” Burkholder said. “There are definitely supply chain issues, mainly with drivers to transport items we need like animal feed, but you can’t make this up. One week this item is not available, then the next one is something else, it just seems to be generalized.

Why is dairy farming important to Pennsylvania?

Many elected officials have roots in agriculture.

Valadao, of Hanford, Calif., shared his connection to the dairy industry during his visit to the Franklin County farm.

“Dairy is important to me because that’s what my family does,” he said. “My parents started the business around 1973, and we moved to the farm we now live on in 2000.”

Valadao went on to say, “California is the biggest agricultural state in the country, most of the time people think about Hollywood, about technology, and kind of forget about all the agriculture we have to offer.”

Pennsylvania dairy also has a lot to offer, but farmers need help with rising feed and fuel costs, he said.

“It’s important to us to visit farms here in Pennsylvania. We can look at pictures and whatever we want, but being here gives us the big picture,” Valadao said.

Pennsylvania ranks 8th in total milk production nationally, according to Dairy Center of Excellence. The Commonwealth’s 474,000 cows produce over 10.1 billion pounds of milk annually. The state’s annual milk production per cow is 21,338 pounds — or about 2,510 gallons — per cow.

With 5,200 dairies, the state has the second-most dairy farms nationwide, more than any other state except Wisconsin, according to the foundation.

What did the group learn about agriculture?

Members of Congress asked about irrigation, how fertilizers are handled as well as transportation disruptions, resource conservation and scarcity of supplies.

Topics of discussion included the addition of large ceiling fans in covered buildings where dairy cows are housed. Although fans keep animals cool during the summer months, they serve another economic purpose.

“Fans are more useful for drying bedding,” Burkholder said. “We used to use 12 bales of hay a week for bedding for these animals. Now that I have the fans installed, we put them on once every three weeks. So we save bedding, we save work. Lots of great efficiencies just from the fans.”

Read more:GOP County has a new executive committee, get to know them here.

Another area of ​​conservation takes place after the cows have eaten. Manure is processed by separating it into solids and liquids. The liquids are filtered in retention areas to be used to fertilize the surrounding fields. The solids are dried and made into bedding commonly referred to as dried manure solids, which offers reduced moisture, pathogens and bacteria content.

“One of the great things about the industry is that I have a lot of friends who are dairy farmers, and we talk a bit about what works for them and what doesn’t,” said Burkholder. “It was a great honor to have the members of Congress here, and I appreciate the time they spent here to see a working farm.”

During Friday night’s roundtable, Joyce, whose district has a slew of dairy farms, spoke about the importance of bringing whole milk back to Pennsylvania schools.

“As a doctor, I know the importance of putting whole milk back in schools; it’s vital for bone, brain and muscle development,” Joyce said. “But to be able to do that, you have to understand and come to a dairy farm. I’m lucky that in Franklin County we have those perspectives. Before we release the legislation, we have to have worked before we started The Producers dairymen are among the hardest working voters in our region and should be celebrated.

Graves, the Louisiana congressman, shared Joyce’s comments on supporting the dairy industry saying, “It’s about getting America back on track and making sure we have the energies to respond to this request.

Joyce said legislation being planned was due to be introduced in January.

“This plan cannot be made without talking to voters, some of whom are here in Burk-Lea,” he said.