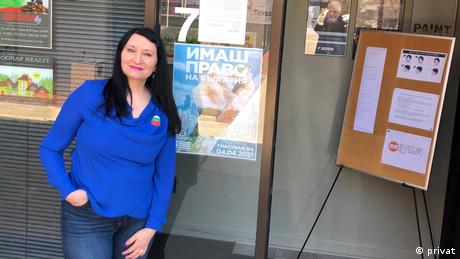 “Whether we mention Bulgaria in Chicago or Sofia, we do it with love,” says Wanya Kramer, who has lived in the United States for 20 years.

Together with advertising experts from her home country and activists who, like her, live and work abroad, she is organizing the “You have the right to Bulgaria” campaign. It aims to encourage Bulgarian expatriates to vote in the legislative and presidential elections in their country on November 14, 2021. Bulgarians elect a parliament for the third time this year after lawmakers failed to form a government in the wake of the elections of April 4 and July 11.

There is no postal voting in Bulgaria, so expats can only vote in person at an embassy or specially designed polling station. It is usually volunteers who organize the vote.

“I know people who drive hundreds of miles to vote,” Kramer said, adding that most of his compatriots in the United States are interested in life and politics in their home countries.

“Many expatriates will return to Bulgaria if we fight corruption, if well educated and qualified people work in institutions and if the health and education systems are reformed,” she said.

Some have already done so. Andrey Gyurov studied at Truman State University in the United States, then obtained his doctorate in Austria. In Vienna, he headed a credit risk department at Volksbank and taught at the university. In 2009 he returned to Bulgaria with his family and began teaching at the American University of Blagoevgrad.

“When I returned to Bulgaria, my biggest fear was that my family and my children would not receive adequate and prompt medical care in an emergency. And that the education system was not of a sufficiently high standard,” said Gyurov said.

For years Bulgarian and Romanian students have shown the lowest scores of any EU country in international PISA studies. Bulgaria’s healthcare system has suffered for decades from a massive brain drain from doctors and healthcare professionals.

Gyurov decided to do something himself. He is running for the centrist “We Keep Changing” party, founded in September 2021 by former Ministers of Economy and Finance Kiril Petkov and Assen Vasilev. Both are Harvard graduates and successful businessmen. In May 2021, they became members of the interim government appointed by Bulgarian President Rumen Radev after the failure to form a government.

By the time a new election was held on July 11, 2021, Petkov and Vasilev had won wide approval for their hard work. As ministers, they discovered serious abuses in public procurement and in the Bulgarian Development Bank. When the second parliamentary elections on July 11 again failed to form a government, Petkov and Vasilev resigned their posts and became fully engaged in the election campaign.

Andrey Gyurov explained that corruption has long been the country’s biggest problem. “We need justice. That is why our top priority is zero corruption,” Gyurov said. “It is because corruption holds the whole country captive and hinders development in all areas.”

Another young foreign-trained minister is Atanas Pekanov. He became a member of the transitional government and remained in his post. After studying in Vienna and London, he gained experience at the Austrian Institute for Economic Research (WIFO) and the European Central Bank (ECB) in Frankfurt. As Deputy Prime Minister, the 31-year-old is currently responsible for the management of European funds.

Together with his team, he is developing a Bulgarian “recovery and resilience plan” to ensure that his country receives resources from the EU’s recovery plan, which aims to help rebuild a post-COVID-19 Europe.

“We are continuing discussions with the European Commission on energy policy and the rule of law,” Pekanov told DW. In order to receive around 6.6 billion euros ($ 7.6 billion) from the EU’s stimulus package, Bulgaria must commit to phasing out coal by 2038.

“The government of former Prime Minister Boyko Borissov, which was in power until April, has done virtually nothing on this issue in recent years,” Pekanov said.

In addition, Bulgaria is in urgent need of judicial reform. A 2020 European Parliament resolution noted a “significant deterioration in respect for the principles of the rule of law, democracy and fundamental rights”. According to the European Commission, the Attorney General wields significant political influence because of his powers and position.

“First of all, we must extend the responsibility of the attorney general and facilitate legal proceedings against the post,” Pekanov said. Attorney general investigations are virtually impossible at present, he said.

“There is also a problem with government procurement,” Pekanov said. “Bulgaria is the EU country with the highest number of public contracts awarded without tendering,” he said, adding that to change this Bulgaria needed a parliament and a stable government.

It is still unclear whether Pekanov will stay in a new government. “It depends on their priorities,” he says.

A vote in a crisis of confidence

Bulgarians will go to the polls amid a fourth wave of coronavirus, which has seen record hospitalizations and deaths. Yet many Bulgarians oppose vaccination. Bulgaria is the EU country with the lowest proportion of people vaccinated in the total population.

The reason, according to Pekanov, is that “no one believes anyone in Bulgaria”. Economist Gyurov, for his part, evokes a “deep crisis of confidence” in the country.

According to polls, longtime Prime Minister Borisov’s center-right GERB party could once again emerge from the elections as the most powerful party. But after more than a decade as head of government, Borisov is politically isolated. Most of the other parties and much of Bulgarian society accuse him of corruption and nepotism.

Many Bulgarian expats will also be heading to the polls on November 14, 2021, hoping their vote can change the country for the better.

“It is true that it is tiring to vote for the third time in a year,” said Wanya Kramer. “But fatigue is something you can overcome, as opposed to apathy. As far as Bulgaria is concerned, we will never be apathetic.”

This article has been translated from German.