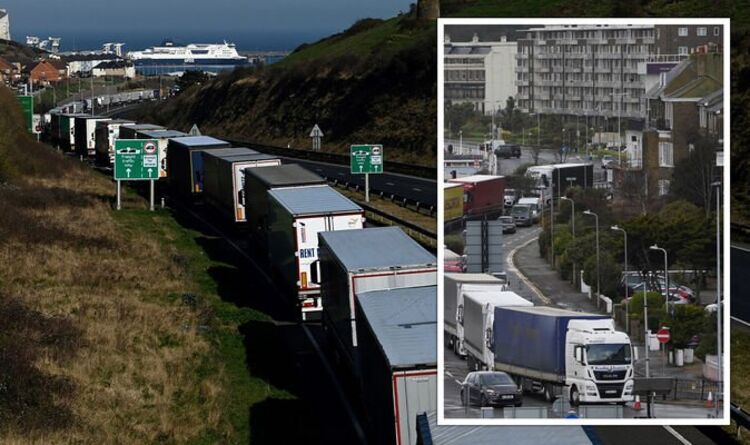 Local council leader Trevor Bartlett, in response to days of traffic jams in Dover, accused the Kent Resilience Forum (KRF) of “ignoring” the needs of people in the area. His remarks came on the fourth day of delays to the Channel crossing, with freight vehicles still parked on the M20 and A20 around the city.

Mr Bartlett said: “Dover appears to be the ‘acceptable sacrifice’ with KRF planning based on accepting the stalemate at Dover.

“While I acknowledge the hard work of those on the front lines over the weekend, I must conclude that the opinions of those of us who know Dover best are being ignored.”

Adding that the traffic jam was a “big blow to local businesses” trying to rebuild after the coronavirus pandemic, he said Dover District Council would review its involvement with the KRF.

The traffic chaos began on Friday as a build-up of lorries waiting for disrupted ferry services at the Port of Kent left motorists trying to enter Dover facing mile-long queues.

A Department for Transport spokesman said: “We are aware of the queues in Dover, and the Kent Resilience Forum and local partners are working to minimize any disruption by deploying temporary traffic management measures as standard. .”

But the disruption, which left local residents unable to drive to shops or work, went unresolved on Monday, when Mr Bartlett, alongside Dover MP Natalie Elphicke and the Leader of Kent County Council Roger Gough, held an emergency meeting with the Minister for Roads, the Baroness. Vere to discuss the issues.

Following the meeting in Parliament, Ms Elphicke said: “Once again events over the past few days have highlighted the need for greater road capacity and better traffic management for Dover.

“It is welcome that the minister has agreed to review the operational performance of these emergency measures, given their severe impact on local residents.”

Travel problems were caused by a shortage of ferries, bad weather and the start of the Easter holidays.

The fact that the M20 is used for parking trucks also plays an important role.

As part of Operation Brock, the traffic management system designed under post-Brexit emergency powers to manage the queues of lorries heading for mainland Europe, the east side of the road does not is only open to freight between junctions eight and nine.

The side of the road towards London remains open to all traffic.

The system was due to expire in October last year, but has since been made permanent.

Mr Bartlett said the council was urgently considering the circumstances under which it would declare a major traffic jam incident “to elicit a more robust response”.

On Saturday, Ms Elphicke partly blamed the disruption on the dismissal of 800 seafarers by P&O Ferries.

While criminal and civil investigations have been opened into the operator’s conduct, P&O Ferries has yet to win permission to continue sailing to Calais, France, with other temporary workers – controversial and cheaper .

DO NOT MISS
Brits forced to abandon trips as canceled flights add to travel chaos [INSIGHT]
Jet stream to freeze Britain – rain, snow and freezing gales until Easter [WARNING]
‘A slap in the face’ as P&O Ferries rehires 30 staff to train replacements [REPORT]

Ms Elphicke, while condemning the delays as having had an “unacceptable impact” locally, alerted traffic was expected to last a few days.

She said: “The traffic disruption caused by P&O’s actions is very serious. Coupled with adverse weather conditions and Easter Getaway traffic, the situation has become serious. It can be expected that this continues for the next few days.”

The Port of Dover said: “The main access roads to the port are currently very busy.

“The continued impact of the absence of any P&O service continues to affect the remaining ferry operations with the start of the Easter getaway period.

“Operators are working hard to process traffic, clear local congestion and get people on their way as quickly as possible. Tourist traffic continues to move through the port.”

He advised passengers to allow extra time for their journey and “use alternative routes if possible”.

Adding to the travel turmoil, ferry operator DFDS announced on Tuesday morning that its ships will no longer be able to take P&O Ferries passengers for two days.

He wrote in a tweet: “P&O FERRIES INFO | DFDS has no availability for P&O customers between 08 April 00:01 and 10 April 23:59. Please do not travel to the port without a confirmed reservation, contact P&O Ferries for d ‘other travel arrangements.’

This follows a reduction in capacity last week when storms temporarily halted all ferry crossings and a DFDS vessel was taken out of service after a minor incident.

Further pressure was brought on by the breakdown of a Eurotunnel Le Shuttle train, which carries freight and all types of vehicles to mainland Europe, in the tunnel on Monday.

This led to ticket sales being suspended and customers facing delays of around 90 minutes.

According to Eurotunnel, it has come to the point of most traffic since 2019, when children returned to school after Britain’s Covid travel rules were scrapped.