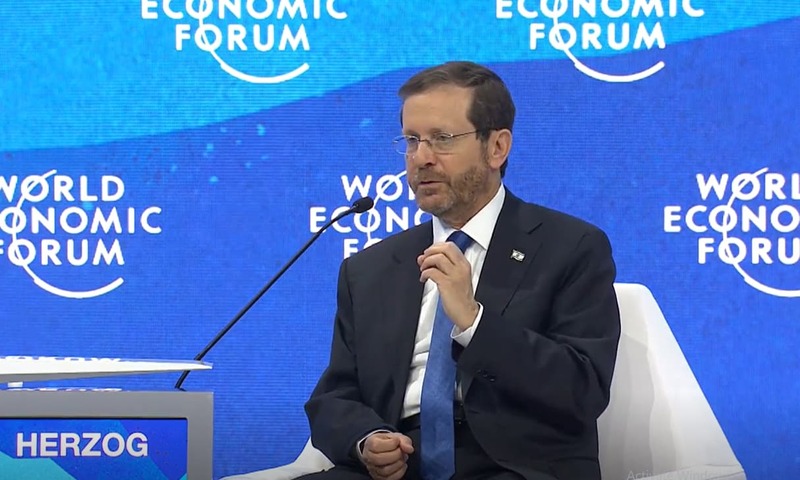 Israeli President Isaac Herzog said he recently received a delegation of Pakistani-Americans, calling it an “incredible experience” and referring to it as an example that showed him a “great change” from of Israel’s ties with the Muslim world.

Herzog made the remarks during a special address at the annual meeting of the World Economic Forum (WEF) on May 26 in Davos, Switzerland, while speaking about the Abraham Accords – an agreement brokered by the United States in 2020 which saw the normalization of relations between Israel, the United Arab Emirates (UAE) and Bahrain.

“The Abraham Accords yield a lot of returns. How would you see that expanding the scope of cooperation?” asked WEF President Børge Brende.

“One was a delegation of young opinion makers from Morocco who lined up on Facebook with an Israeli [group]. They both came and sat with us for an hour and it was just amazing to listen to the experience of breaking down barriers and moving forward and intertwining,” he said.

The next day, Herzog said, he received a delegation of Pakistani expatriates who were living in the United States “with other members from other countries in their region.”

“And I have to say, it was an amazing experience. We haven’t had a group of Pakistani leaders in Israel of such magnitude. And it all stems from the Abraham Accords, which means Jews and Muslims can live together in the area. […].”

Although Herzog did not give details of the Pakistanis he met, Sharaka – an Israeli non-governmental organization (NGO) – had organized the visit of a Pakistani-American delegation to “promote peace in the Middle East “.

“For a just and lasting peace, it is imperative to have a two-state solution in accordance with the relevant resolutions of the United Nations and the Organization of Islamic Cooperation, with the pre-1967 borders and Al-Quds Al-Sharif as the capital of a viable, independent entity and contiguous Palestinian state,” the foreign ministry said at the time.

However, the two countries have long had undeclared contacts at a lower level and the only known interaction took place on September 1, 2005, between then Foreign Minister Khurshid Kasuri and his Israeli counterpart Silvan Shalom.

PTI chairman Imran Khan addressed the meeting of the delegation at a rally in Charsadda today, saying the ‘slaves of the United States’ in government would do whatever they were told .

Attacking the government, he claimed he would make a deal with India at the expense of the Kashmiris and also recognize Israel.

Meanwhile, PTI leader Shireen Mazari interpreted the Israeli leader’s comments as “another commitment made to the United States as part of a regime change plot by an imported government and other co -conspirators filled!”

PTI’s Imran Ismail said all those who had called party chairman Imran Khan a “Jewish agent” all their lives have now been revealed to be “certified Jewish agents and slaves”.

The nation’s pride is being auctioned off because of this shameful slavery, he said.

He said the visit in question had been organized by a foreign NGO and that Pakistan’s position on the Palestinian issue was “clear and unambiguous”. “There is no change in our policy on which there is full national consensus,” the FO statement added.

“Pakistan strongly supports the inalienable right of the Palestinian people to self-determination. The establishment of an independent, viable and contiguous Palestinian state with pre-1967 borders and Al-Quds Al-Sharif as its capital, in accordance with relevant UN and OIC resolutions, is imperative for a just and peaceful peace. sustainability in the region,” said FO.

He said the government’s policy was “clear” and that it did not recognize the State of Israel. “All our sympathies go out to our Palestinian brothers and sisters,” Iqbal added.