Beaumont ISD board chairman ready to move on on stadium renaming 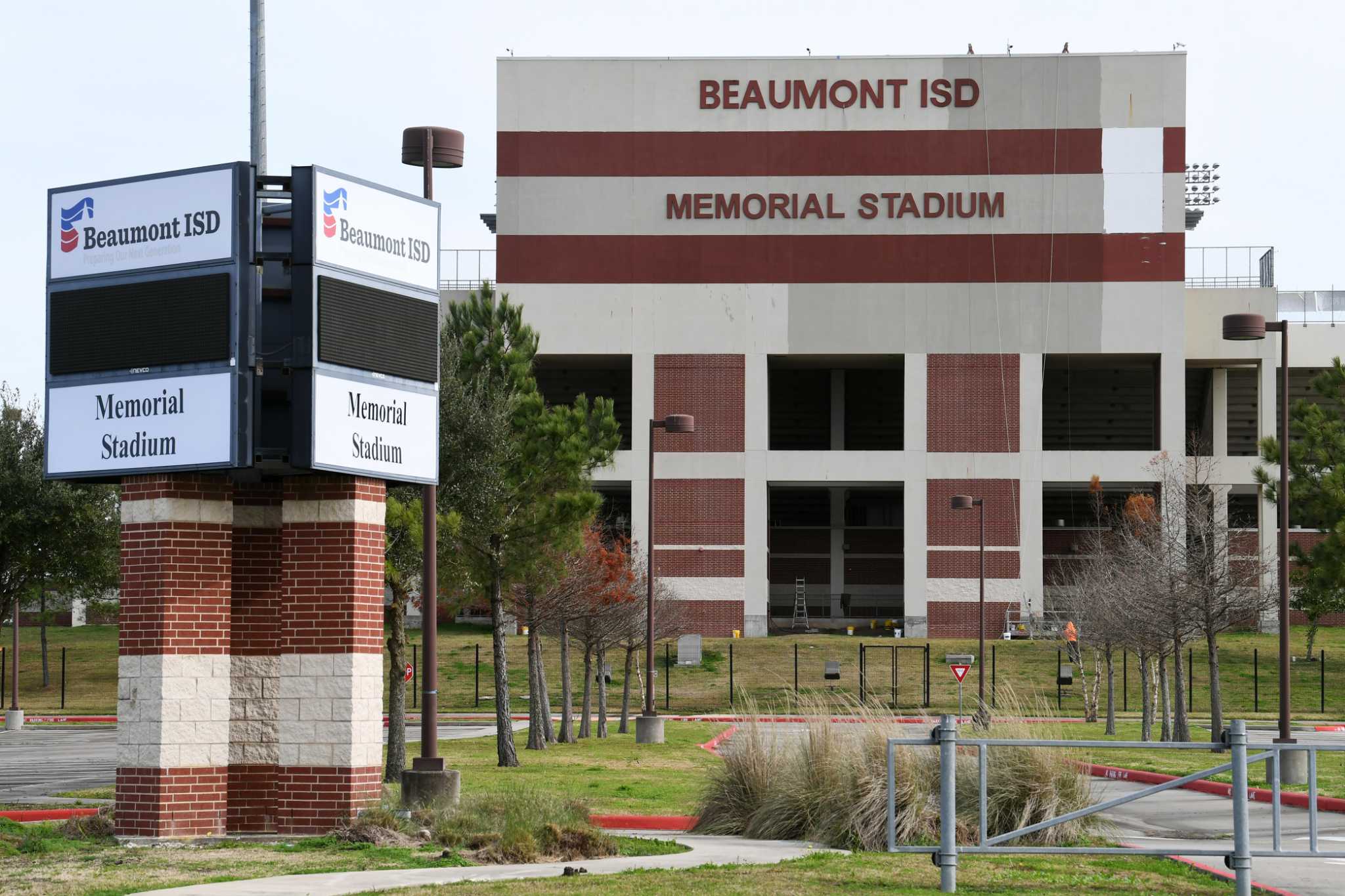 Off Interstate 10 at the southwest edge of town, Memorial Stadium at Beaumont ISD towers above all its surroundings.

However, it is not the sporting events taking place at the stadium that garner the most attention or commotion.

This is the name of the stadium itself.

For the past decade at least, the stadium name issue has caused more discussion and uproar than almost any other issue.

But many people are ready to move on, including BISD School Board President Robert Dunn, Sr.

“It has absolutely nothing to do with the students,” he said at Thursday’s board meeting ahead of the vote that ultimately kept Memorial Stadium’s name as it was.

Earlier in the week, news broke that the Board of Trustees would decide whether or not to return Memorial Stadium to its original designation, “Carrol A. “Butch” Thomas Educational Support Center.”

It was the second time in five months that the issue was on the agenda.

RELATED: Residents still divided on the name of the Beaumont stadium

First opened in 2010, the stadium is named after Thomas, the district’s first and longest-serving black superintendent, who also oversaw the $388.6 million bond that was used in part to build the facility.

After he left the district in 2012, a forensic audit criticized Thomas’ administration for financially mishandling bail.

When the Texas Education Agency took over the district in 2014, it appointed a board of trustees who later voted in 2018 to remove Thomas’s name from the stadium, choosing to rename it “Beaumont ISD Memorial Stadium”, to honor the current and former district. high schools.

On Thursday evening, the board again voted on the matter. Ultimately, the move failed by a vote of 4-3.

Earlier in the year, it looked like some locals may have rallied around the sale of the stadium’s naming rights, which could have given the neighborhood an opportunity to generate revenue.

In fact, the stadium’s naming rights request for proposal, released on May 11, showed the district could have earned as much as $1.25 million to $2.15 million depending on contract length and details of each of the four tender documents.

The board even held a special meeting in March to discuss workshop ideas and tender documents.

But the district’s website shows the request for proposals was withdrawn on May 16.

Lewis said Thursday the request for proposals has been withdrawn for revisions.

Dunn confirmed this Friday, saying some of the language needed to be corrected before being presented to the board again. He said there was currently no timeline indicating when that might happen.

BISD’s ancillary services director Peggy Haynes told The Enterprise on Thursday night that before the tender was withdrawn, “a few” companies had asked about the tender proposal, indicating potentially an interest in purchasing naming rights. Haynes did not say which companies inquired about the possibility.

Most council members made comments ahead of the vote, sharing correspondence sent to them by voters and explaining their own reasoning for their respective votes.

Lewis started the discussion, reiterating past comments that his constituents had been hurt by the removal of Thomas’s name and wanted to see him back in the stadium.

He also said council member votes should not be based on the sale of naming rights or donations made to the district.

“I refuse to be bound by a decision drawn by money or compromise my integrity because someone can write a check to the district,” he said.

Wallace-Spooner said while Lewis voters may have been hurt by the 2018 decision, which she voted in favor of as the first elected director returning to the board, her voters were broadly supportive. to the fact that Thomas’ name does not appear in the stadium.

She then read a relatively long email sent to her and Superintendent Shannon Allen by a resident in the hour before the council meeting.

“(To Allen) this proposal is hugely counterproductive to anything you’ve been working toward,” Wallace-Spooner read.

The sender recalled how they and their family initially supported Thomas and the bond issue, even encouraging friends and community members to vote for it.

“We ended up feeling burned and extremely disappointed by the actions of Dr. Thomas and those he led,” she continued. “Then the composition of our community and of BISD began to change before our eyes and not for the good. Families who were fed up transferred their children to Hardin County and left town altogether…People who could leave did and it permanently changed our community and our schools.”

If the Thomas name were to be reinstated in the stadium, the sender wrote that he believed more people would leave.

“When you all twice elected me at-large, I was one of the voices in this town, Beaumont, Texas, and I spoke,” Wallace-Spooner concluded.

Although he voted against restoring the original name, Hickman also read a letter from 24 black cabinet ministers sent earlier in the year. She started off by saying that one of the biggest problems Beaumont faces is a lack of understanding for each other.

“We don’t understand where we’re coming from when we make our case, and I think it’s important that it’s said out loud and that people are here to hear it and maybe share some thoughts with the rest of the community,” she said. mentioned.

The letter began by pointing out that although football stadiums were built for the three majority white high schools in the district – South Park, Forrest Park and Beaumont High – there were never stadiums built for the two majority high schools. district, Charlton-Pollard and Hébert.

RELATED: ‘We were there for you, now be there for us :’ Beaumont teachers ask for support, raise

“Please let me share with you what black people have had to endure in their dealings with the school district for the past 90 years,” Hickman continued as he read the letter. “In the history of employment in Beaumont’s two school districts, BISD and South Park (ISD), none in 90 years has interviewed a black person for the position of superintendent.”

The letter detailed how the school board became majority black in 1994, how Thomas was hired in 1996, and described the bond that remodeled and built new facilities.

“Certain ministers and certain members of the black community are calling on BISD school board members to vote to remove the Memorial Stadium name and establish the Carrol A. ‘Butch’ Thomas Educational Support Center,” Hickman continued. “Please don’t talk about selling the name rights to the educational institution, that would be an insult to black history.”

Woodrow Reece, who previously served as chairman of the board, noted that Thomas was not charged after the audit was completed.

RELATED: Beaumont School Board districts are going to be turned upside down

“We had a council, the council weren’t charged because we didn’t do anything wrong,” he said, later acknowledging that “four or five criminals” went to jail because of their “schemes in the management of our money”.

Closing the discussion, Dunn said he did not want to return to the issue. He agreed the board should not have changed it and said he was not opposed to Thomas’ name being put back on the stadium.

However, he did not want to use district funds to do so.

He asked Lewis to change his motion to say that upon receipt of sufficient donations to effect the name change and related construction costs, the council would approve the name change.

Lewis declined to amend his motion.

Dunn said Friday he still supports selling naming rights and wants it to remain an option for the district.

“I always wanted it to be part of the package,” he said. “We have a primary part and a secondary part of this stadium for names. So we could always have had both. But he refused.”

Dunn – also an at-large member – said he also received more than 70 phone calls and numerous emails from his constituents telling him not to change his name.

He explained to them that he did not yet know his decision but knew that he was not going to use the district’s money to make the change.

“The majority (of people he spoke to) were okay with that as long as I wasn’t wasting, in their words, the kids’ money changing my name,” he said.

Lewis said Wednesday that if the motion fails, he would continue to support the wishes of his constituents, whoever they may be.

“I will continue to support and serve my constituents,” he said in an email. “If it is in the interest of those who live in District Two to continue with this article or leave it as is, then I, as their representative, will comply.”

Dunn said he does not plan to address this issue again and instead hopes the board will continue to focus and address other issues in the district, particularly employee discipline and compensation issues.

“That’s going to be my main focus right now,” he said.