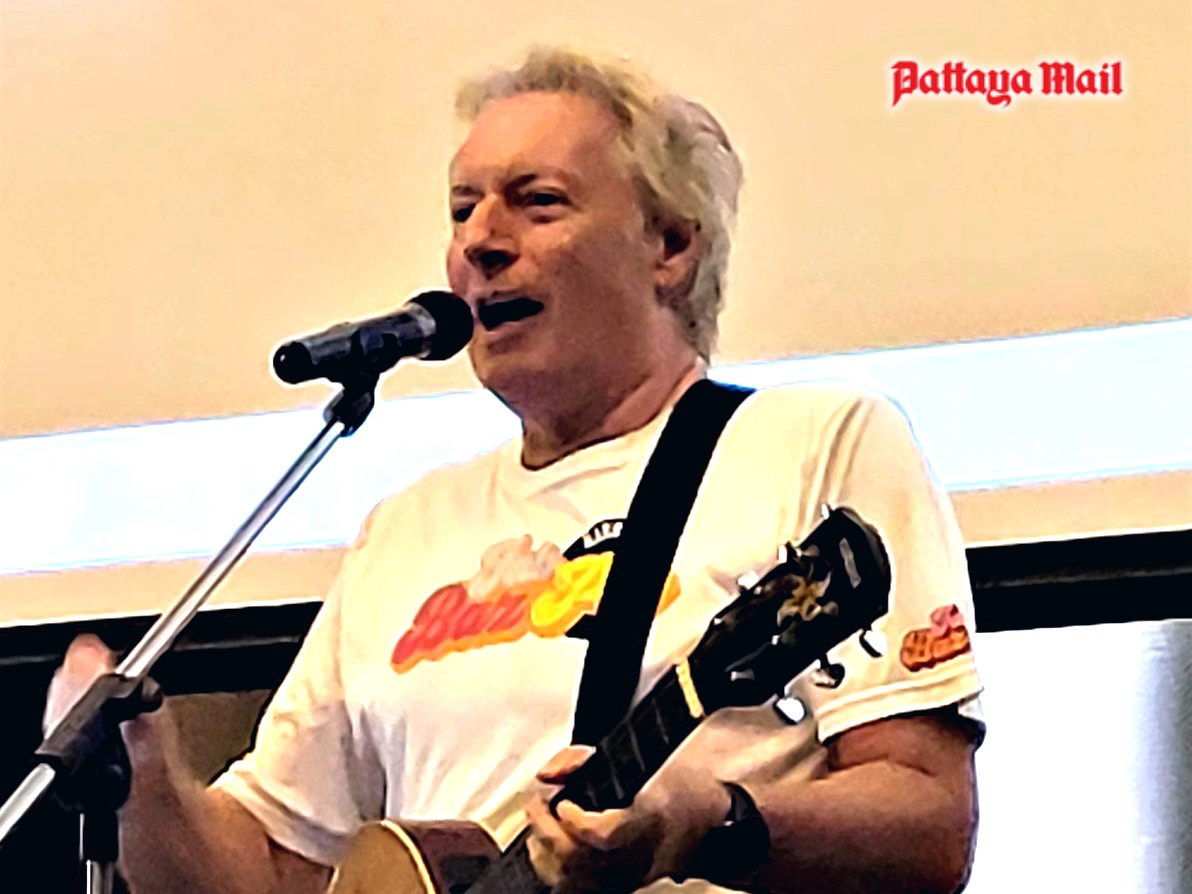 Barry Upton was hosted for another Words and Music session at the Pattaya City Expats Club (PCEC) meeting on Wednesday July 13th. He is a successful songwriter, arranger, musician and producer of many different forms of popular music. He has his own weekday show “Behind the Music” on FM 96 Pattaya radio and is well known for his appearances at many venues in Pattaya.

Barry began by entertaining his audience with a Beatles favourite, “Here Comes the Sun” as part of the “Music” portion, then explained how the pandemic shutdown was an opportune time as he needed a break from his many shows. Despite everything, he continued his radio show and used the time to work on new ideas for songs, albums and music videos.

He explained how he came up with the album name “Hormones of Happiness” with 60s-style music during the first shutdown. During the second stop, he had the idea to create videos with him singing in a tropical cafe as pretty girls in bikinis passed by. He couldn’t find the “right” coffee in the Pattaya area, but by checking out some travelogue websites, he found it. It was on Koh Lipe, not easy to get to, but perfect for what he wanted. Thus, creating his music videos for “Barry’s Tropical Café”.

He also mentioned that among his many activities, songwriting is his favorite. Also, although songwriters have different methods, his method is to start with a title and then develop the music and lyrics. He mentioned that he noted the number of people looking at their cell phones, which gave him a title, “Stop looking at your phone”, and then created the music and lyrics. He then performed the song for his PCEC audience. Similarly, another example was that the Oscars in Hollywood were delayed due to the Covid outbreak which inspired another title and song, “This Oscar Goes to You”.

Why offer your music for free on YouTube, you might ask? But in today’s music environment, it’s something you have to do to get your songs out there. This then leads to being contacted by filmmakers and others for permission to use your music. Currently, in addition to his tropical coffee videos, he has created a new YouTube channel called Fab Baz Pop Music TV to showcase his songs.

At the end of Barry’s presentation, MC Ren Lexander updated everyone on the latest happenings. This was followed by Brian Maxey who led the open forum where attendees can make comments or ask questions about expats living in Thailand, especially Pattaya. For more information on the PCEC, visit their website at https://pcec.club. Visit the PCEC YouTube channel for a video of the presentation at https://www.youtube.com/watch?v=VrE173o6Zpo. For his website, visit http://barryupton.com/.