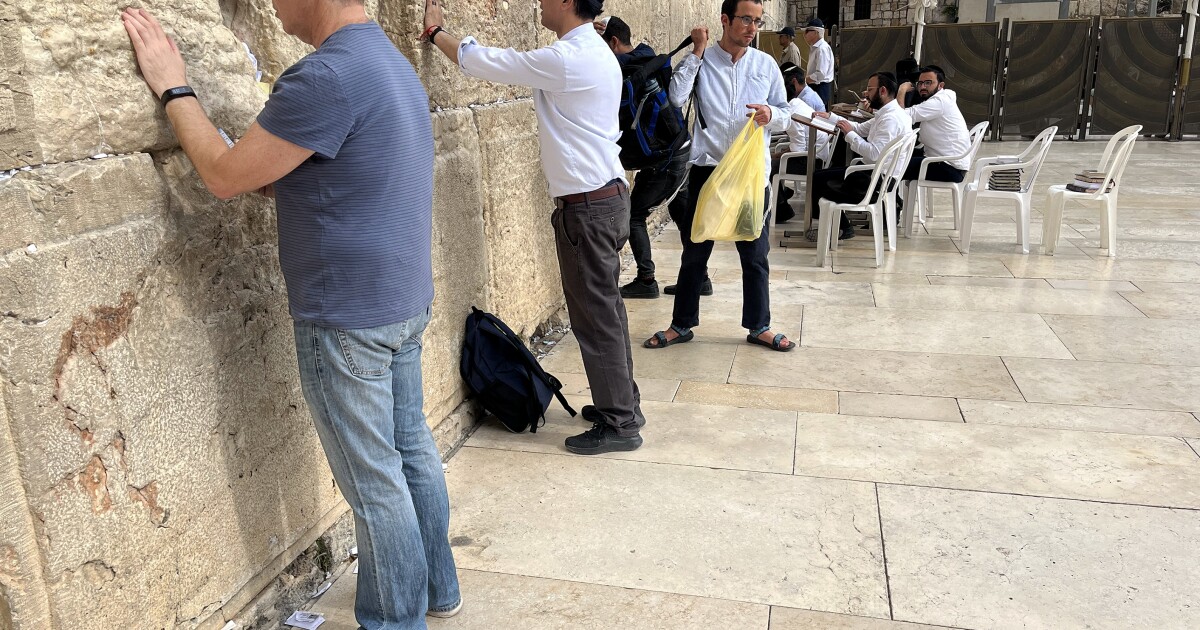 JERUSALEM — “THIS PASSPORT IS VALID FOR ALL COUNTRIES IN THE WORLD EXCEPT ISRAEL,” reads each Pakistani passport.

But there was Fishel BenKhald, one of Pakistan’s few Jews, clutching that passport in front of the Western Wall, the revered Jewish place of worship in Jerusalem –

“the land where my heart and soul are connected,” he says.

He arrived in Israel in early May with a rare visit from 15 Americans, mostly of Pakistani origin, who were traveling with their American passports but who maintain close ties to their home country. The trip was organized by an activist group of American Muslim women and sponsored by an Israeli organization seeking to expand Israel’s ties with Muslim-majority countries.

The trip attracted little attention from Israelis and Palestinians, but sparked fury in Pakistan, where opposition politicians, including ousted ex-prime minister Imran Khan, saw it as an overture ploy secret to end their country’s official boycott of Israel. Pakistanis were particularly angry that a state television talk show host, who Khan supporters say is either close to the Pakistani military or travelling. He was subsequently fired.

“The good news,” says Ahmed Quraishi, the television journalist, of the trip to Israel and the ensuing controversy, is that “we have today the first solid and rich national debate in Pakistan on the establishment of diplomatic relations with Israel. It’s huge.”

Pakistan’s senate on Monday adopted a resolution confirming its position against Israel. A senator called for the banning of the organization that led the trip, the American Muslim and Multifaith Women’s Empowerment Council. Some in Pakistan have called for expats who traveled to Israel to be stripped of their Pakistani citizenship.

“This is the price Muslim American Pakistani women have to pay for peacebuilding,” the group’s co-founder Anila Ali told NPR.

Anger in Pakistan erupted after Israeli President Isaac Herzog spoke publicly about his private meeting with the Pakistani and Pakistani American delegation at his residence in Jerusalem in early May.

“I have to say it was an incredible experience, because we’ve never had a group of Pakistani leaders in Israel on such a scale,” Herzog said. said about civil society activists before an audience at the World Economic Forum in Davos, Switzerland. “All of this flowed from the agreements of Abraham.”

Pakistan officially refuses to enter into diplomatic relations with Israel until the Palestinians have an independent state. This has long been the case for many Muslim-majority countries. But in 2020, the UAE and Bahrain established relations with Israel and signed the US-brokered Abraham Accords. Morocco and Sudan have since joined, and there has been constant speculation among Pakistanis as to whether their country might follow suit.

Pakistan and Israel have long had quiet dialogues on military and security issues – both are nuclear powers – and their respective foreign ministers met publicly in 2005.

“I can’t tell you that Pakistan…is the next state to join the Abraham Accords and it will happen tomorrow,” Israeli Intelligence Minister Elazar Stern told NPR. “We hope that all moderate Muslim states and countries in the Middle East will join us.”

President Biden’s planned visit to Israel this month has raised hopes in the country that a new US-brokered normalization deal may be in the works. Israel has set its sights on Saudi Arabia, the custodian of Islam’s main holy sites and a heavyweight in the region.

Israeli media reports that the United States is currently mediating talks for what could become a first public Saudi-Israeli agreement on the status of two islands in the Red Sea through which Israeli ships pass.

“The next step in the Abraham Accords, in normalization, must be normalization with Saudi Arabia,” Israeli Foreign Minister Yair Lapid told Israel Army Radio on Monday. “It’s a long and careful process on both sides.”

Although Pakistan is often swayed by its ally Saudi Arabia, the odds today seem stacked against normal relations between Israel and Pakistan.

Many Pakistanis are embedding a Palestinian flag in their social media profiles, and protests against Israel erupt in Pakistan whenever there is an Israeli military escalation with the Palestinians. As Pakistan teeters from one political crisis to another, one position that would almost certainly unite most Pakistanis is opposition to relations with Israel.

There is also deep-rooted anti-Semitism in Pakistan. It is quite normal in political discourse for events to be blamed on Jews or Jewish conspiracies; the former foreign minister made anti-Semitic remarks on CNN last May.

Geopolitically, Pakistan does not have the same concerns about Iran — its nuclear program and support for militant activity in the Middle East — that have pushed Pakistan’s Gulf neighbors toward Israel.

“If Iran is not the main problem for them, what can they gain from it?” Eyal Zisser, a Middle East expert at Tel Aviv University, talks about Pakistan. “Why should they risk themselves in terms of, you know, public opinion there?”

But Sharaka, the Israeli group that sponsored the delegation to Israel, says current and former Pakistani officials acquiesced in BenKhald’s participation in the Israel trip.

“I would be shocked if this would be the last delegation of Pakistanis, or Pakistani-Americans, to Israel,” said Elie Pieprz, Sharaka’s director of international affairs.

Fawad Chaudhry, the former information minister in Khan’s government, did not confirm that Pakistan had given the go-ahead. “Our policy is absolutely no recognition or engagement with Israel until the establishment of the State of Palestine,” said in a text message to NPR.

Is it a trial balloon?

“It’s an open secret that [the Pakistani] establishment has very close ties with the Gulf States,” says Raza Roumidirector of the Park Center for Independent Media at Ithaca College in New York, and the editor of Pakistani liberal media Naya Daur. “There must be an ongoing debate, and this visit was just a testing of the waters type visit.”

It may seem that a small interfaith group would have little influence on a country’s foreign policy. But such trips can serve as a trial balloon.

An interfaith delegation of Sunni and Shia Muslims, Buddhists, Christians, Hindus and Sikhs from Bahrain paid an unprecedented visit to Jerusalem in late 2017, three years before Bahrain established diplomatic relations with Israel.

The Pakistani American delegation traveled to Tel Aviv, visited the Israeli Holocaust Memorial in Jerusalem and was guided by a Palestinian tour guide to the Al Aqsa Mosque, the heart of Islam.

“It’s such a blessing to be here at Masjid Al Aqsa. The best time of my life,” Pakistani American Rana Seyd said, fighting back tears after visiting the religious site. “It is very true that with a Pakistani passport, I could not have traveled. But that is why I prayed here, may Allah guide each of us to be friends.”

BenKhald, who lives in Karachi and runs a Jewish kosher certification business for food makers exporting their products overseas, hopes his country will end its official boycott of Israel for help with Pakistan’s water crisis. Israel is a parched country that has turned into a water technology powerhouse.

The Pakistani-American activist who helped organize the visit is Ali, the California-based co-founder of the American Muslim and Multifaith Women’s Empowerment Council.

“Every time I’ve spoken to politicians, and behind closed doors, they’ve said, ‘You know, we don’t have a problem with Israel. They also say, ‘We don’t have a problem with the Jews.’ But then when you’re a politician, that’s all, you use that rhetoric. You use rhetoric to divide,” she says. “We have to, like people say, ‘We don’t want you to use that.'”

Last month, she was standing with the delegation in front of the Western Wall when suddenly a visiting dignitary arrived from another country at odds with Pakistan.

Indian Agriculture Minister Narendra Singh Tomar was in Jerusalem to sign a water technology deal with Israel. Activists lined up in front of him and Ali, who counts his family among the founding leaders of Pakistan when the country split from India in 1947, asked the Indian minister to deliver a message to Prime Minister Narendra Modi.

“We pray for India and Pakistan to make peace and we share Allah’s resources,” she said. “Water is important to Pakistanis and important to Indians. So let’s all pray for that.”

She proposed that India and Pakistan embrace each other, as India embraced Israel.

The Indian Minister’s response was a polite smile.