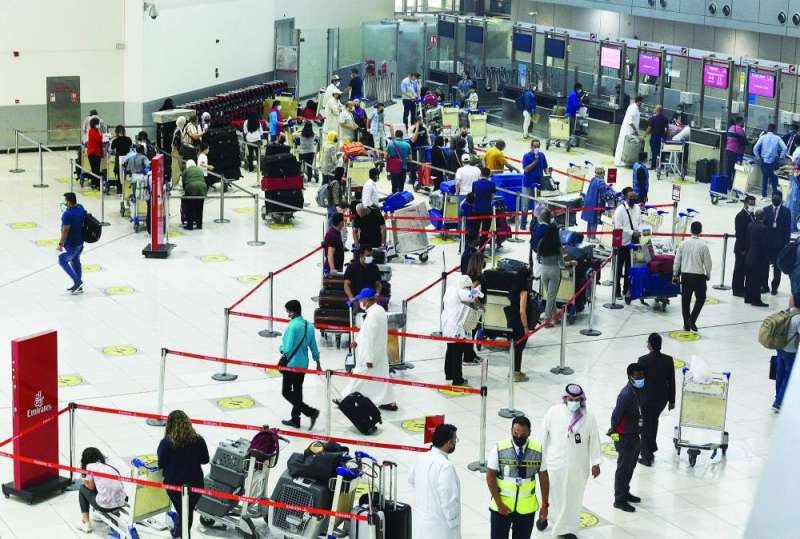 KUWAIT CITY, January 3: While efforts are underway to change the demographic structure and implement the Kuwaitization plan in state agencies, the labor market has undergone several changes over the past year, including the permanent departure of 257,000 expatriates from the country. They include 205,000 private sector employees and 7,000 government agencies, reports the Al-Qabas daily. According to recent government reports released by the Public Authority for Civil Information (PACI) and the Labor Market System, most of those who left the country were in the private sector, followed by domestic workers in the family sector, because 41,200 domestic workers left the country in 2021.

On the other hand, the number of Kuwaitis in the labor market increased by a total of 23,000 in 2021, the majority of whom are in the public sector. The reports explained that there are 2.7 million people in the country’s labor market.

Among them, Kuwaitis constitute 16.2%. A large proportion of working expatriates work in the domestic sector, with a total of 639,000 expatriates, constituting 22.8 percent of the working population. The labor market has experienced a severe shortage in certain professional specializations due to the COVID-19 pandemic and the suspension of the recruitment of expatriate workers from abroad.

The private sector has suffered a significant decline in employment, and the relevant agencies in the country have not been able to attract the national workforce to the jobs offered, which correspond to their academic levels. Demand for employment in the public sector is still the highest. A report published by the National Employment Sector within the Public Authority for Manpower (PAM) revealed that 21,000 citizens are registered as job seekers, 48.3 percent of whom wish to be appointed to jobs in the private sector.

This is a high percentage from the rate nine years ago, with a total of 10,162 citizens. Despite the efforts and downsizing, reports have revealed that the shortage of professional labor is negatively affecting the building and construction, agriculture, fishing, cleaning, utilities sectors. and journalists and typists.

The salary of a daily worker in the aforementioned fields increased to over 25 KD per day from 10 KD to 15 KD before the COVID-19 pandemic. Currently, with the reopening of flights and the return of many expatriate workers stranded abroad, labor gatherings have been observed in different parts of the country, such as the entrances and exits of Khaitan, Jleeb Al-Shuyoukh, Shuwaikh, Kabd, Sulaibiya. , Mutlaa Road, Wafra Road, Sabah City Road, Ahmadi and Sabahiya industrial zones. The daily monitored the return to normal prices of workers in transport, installation and dismantling of furniture and other public services. A worker in this field charges around 5 KD in exchange for any work.

In an interview with the daily, some of these workers said that they are proficient at the job in most areas related to building, construction, transportation and other orders that require physical exertion as they are used to to such work. However, some of them are violators of the right of residence and do not work in any specialized company. The Civil Service Commission (CSC) and WFP are studying the possibility of increasing the rate of hiring Kuwaitis in the private sector and the Kuwaitization of certain trades, jobs and titles. Relevant state authorities are also working on a strict plan to activate the mechanism for appointing people with special needs to private sector jobs. The country’s hotel sector is expected to announce new jobs for Kuwaitis, in addition to expanding the fields of business owners and small and medium-sized businesses.

In this regard, informed sources said they expect the domestic labor market to pick up in the coming period, with an increase in the recruitment of large numbers of such workers in Kuwait. They explained that the high volume of labor sent to Kuwait had helped to fill part of the deficit.

The past period has been marked by an increase in the specialized workforce in the field of home nursing and care of the elderly and children. It is clear that there is a shortage of companies working in the field of guarding, security, cleaning services and transportation in light of the COVID-19 crisis, as the volume of demand for these professions increased.