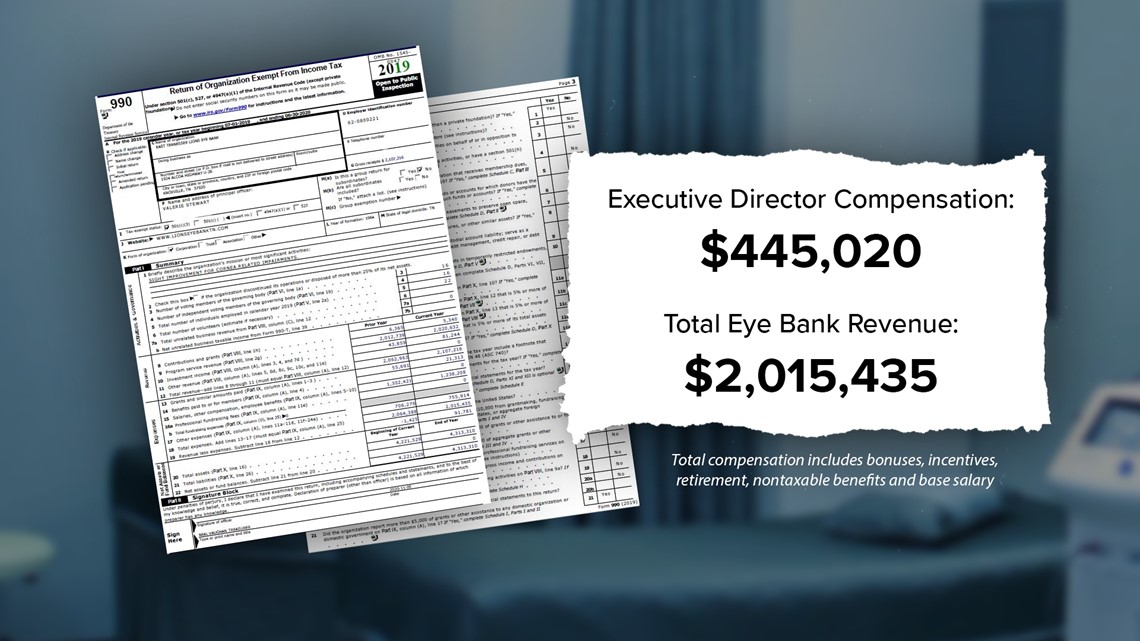 In a statement to 10News, the board said it fired him because he “categorically refused” to work with them and believed his conduct was “inappropriate”.

Without any discussion, the ten members present voted unanimously to remove him from his position as administrator. 10News was allowed to attend the meeting, but could not record anything.

Johnson had raised questions about why executive director Valerie Stewart earned about $445,000 in the 2019 tax year, including about $200,000 in bonuses and incentive compensation.

The nonprofit organization reported $2,015,435 in total revenue that year to the Internal Revenue Service (IRS). Stewart’s total compensation was more than a fifth of that.

“The CEO called me and gave me an ultimatum: either I could resign from her board or she already had the votes cast to conduct a vote forcibly removing me from the board,” wrote Johnson in a letter to fellow ETLEB directors. “She said I had no right to ‘surveil’ the organization.”

RELATED: A Doctor on a Mission: Saving the Lives of Pregnant Women and New Mothers

In a statement to 10News, the ETLEB said it is aware of allegations that its employee incentive program is excessive.

ETLEB said he asked him to substantiate his allegations, invited him to sit on a committee and meet with the management team to further discuss his concerns.

Johnson told 10News that “obviously isn’t true” and that he’s never had the opportunity to serve on a committee. He said he was left out of several board conversations, even though he was a current member.

ETLEB said it repeatedly explained its board procedures to Johnson.

“He categorically refused to work with the Council,” the statement said. “The Board believes that Mr. Johnson’s conduct during this time is inappropriate and that it is in the best interests of the organization to part ways with him.”

Johnson wrote that his questions came from a place of love for the eye bank’s mission and that he hoped fellow directors would take his concerns seriously.

“Ultimately, we were elected to be good stewards,” he wrote in a letter to fellow trustees. “Overseeing things like compensation is one of our most important responsibilities.

The ETLEB said it believed the executive director’s compensation was appropriate, given Stewart’s responsibilities and tenure.

“[The Board] has sole authority and responsibility to determine his compensation,” he said in a statement. “Given her years of service and success, Ms. Stewart’s compensation is reasonable and well deserved.

East Tennessee Lions Eye Bank is aware of allegations by current board member Brandon Johnson that its employee incentive program is excessive. Mr Johnson also alleged that the other administrators were retaliating against him for voicing his concerns. These allegations are not true. When Mr Johnson raised his concerns at a recent board meeting, the other directors listened but ultimately disagreed. The Commission asked Mr. Johnson to substantiate his allegations; invited him to sit on a committee; and meet with the management team to further discuss their concerns; however, he refused. The council explained its procedures on several occasions and he categorically refused to work with the council. The board believes that Mr Johnson’s conduct during this time is inappropriate and that it is in the interests of the organization to part ways with him.

Since 1998, Valerie Stewart has led the organization with unwavering dedication and grace. She and her team are tireless advocates for people with visual impairment and blindness. The Board works closely with Ms. Stewart and has exclusive authority and responsibility for determining her compensation. Ms. Stewart was neither an employee nor a director when the board adopted the incentive plan. Given her years of service and success, Ms. Stewart’s compensation is reasonable and well deserved.

East Tennessee Lions Eye Bank is proud to have earned high scores for its financial health and commitment to governance practices from independent, nonprofit watchdog groups like Charity Navigator. More than 80% of every dollar received goes towards fulfilling its commitment to the community by helping to restore sight to more than 400 people each year and funding projects such as adding musical toys with Braille instructions to the playgrounds. local games. The remaining dollars spent allow the organization to fairly pay its team and cover routine but necessary business operations. Information about the organization’s income, expenses, and other important information can be found on the Tennessee Secretary of State’s website (sos.tn.gov/charities).